An Expatriate's "Paris in August" 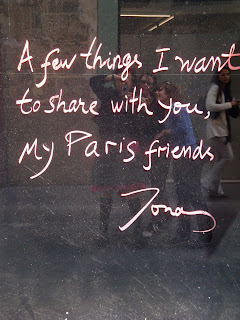 I live in a city to which I don’t belong, and never will. I live in a city together with others who don’t belong. We are all in a strange world, together, creating community among people who don’t belong. Paris is a city of clichés, a city many people imagine they have a stake in, but this has not been a reality in my experience of Paris. I might be here for years, and yet, no matter how good my French gets, no matter how well I think I have integrated into French life, really, I will never belong. Not belonging in Paris is, however, not such a bad thing. Paris is not New York; it’s not a city that opens its arms and says "welcome" as we step off the boat, “you are one of us.” And Paris is also not a city where not belonging means being pushed to the utter edges of society. Paris and the Parisians look askance, utter a more subdued “bienvenue” followed by “we will treat you well as guests in our beautiful city.” And so as expatriates, we are welcomed, but given a different set of conditions from the locals. Namely, the warm welcome also communicates that we are expatriates, and always will be. I often wonder if I will continue to be “une étrangère” even if I buy an apartment, my signature attached to a tiny piece of Paris, or if I marry a Frenchman, or indeed, perform any of the other social rituals that might qualify me for “residence.” I wonder if I would ever want that qualification. My not belonging is a luxury that enables me to stand back some days and recognize how beautiful this city is, and of course, how much I love being here, a stranger in this mythical, sometimes medieval city. My attachment to it is based on a vision of Paris, always, from the outside.

In August, when those who do belong leave for their country and coastal versions of Paris, those of us who don’t belong, sometimes love the city the most. At least I do. Because I feel as though without the Parisians I come closer than ever to staking my claim. On the all but empty rue de Rivoli, I get to ride my bike peacefully, without the constant aggression of taxis, buses, scooters. Of course the tourists are still here, pedestrians who, for a biker, must be approached as something like moving trees, suddenly stopping to look at the map, take a photo, admire the view, or fall in love with a window display. Many of the shops close down in August, and even those that don’t have more flexible hours. Read: they will probably be closed the day I happen to go. But I have been here long enough to know — even though I don’t belong — that certain things just won’t get done in August. Fix that broken necklace? Forget it. Pop into that favorite café? No way. Or be assured that my favorite restauranteur will be awaiting me on a mild August night – unlikely. That said, most of the time, I prefer everything closed up for the summer, or “en congé” as they the signs on doors announce. There’s a quietness and a laziness to Paris that reminds me it's summer, even when I am not on vacation, even when there is no sun, even when I am meeting deadlines at work. I like it like this: all the signs in place and not having to travel to the rivière or get on a plane to be in the heat and hassle of summer. And besides, I get to explore and belong as a solitary bike rider in this glorious city. 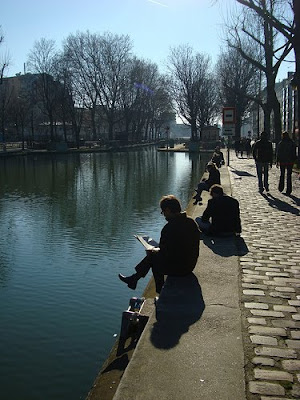 Not all places empty out, and in fact, most places in my routine exhibit the signs of business as usual. It makes sense, because these places are filled with people like me, people who are not bound to the mores and forms of Paris and the Parisians. It’s still impossible to get a place in the Bibliothèque Nationale or the public library at the Centre Pompidou in August. The libraries are overflowing with people like me: those of us without space, those of us without a stake on the property in Paris, and therefore, need a place to work. I notice as I run past Notre Dame in the mornings that the line to climb up to the tower is longer than ever, in fact it is endless in August, filled with Italians, Germans, Americans, Japanese and Spanish tourists. I don’t know how they can bear standing in a line that long, but of course, in every other month of the year, that’s me, at the post office, the bank, the supermarket, patiently waiting my turn in Paris. 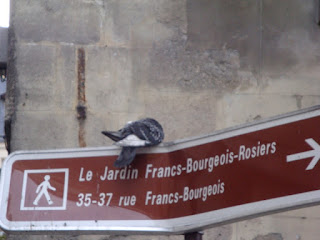 It’s not just the tourists and bookworms who get to take over the city in August: Paris Plage, the all night open air cinema screenings at La Villette team with people, all making Paris home for a day, a week, a month, perhaps the whole summer, even a lifetime. And there are, of course, Parisians, but mainly ones like me, the kind that get to take over the city that for 11 other months of the year we might not be central to. I see lots of Africans, Middle Easterners, Asians, homeless, crazies, lots of young people, and of course, those tourists blocking the roads and the sidewalks in August.
To me, it’s such a strange concept to shut down for the whole month. To me, whose work is never done, and who is so energized by all that is possible in a city like this, why leave for a whole month when life is so short? It would be different if the shops, the businesses, the stores all shut down so their proprietors could go hike the Himalayas, walk the Inca trail or to trace the aboriginal songlines in Australia. But generally, as I understand it, that’s not where Parisians go. They tend rather, to go to the country, the beach, usually in France, and neighboring European countries. I probably won’t ever understand how this can be “a vacation”, but then, I am not Parisian, and I never will be.
Posted by Frances Guerin at 7:29 PM

Email ThisBlogThis!Share to TwitterShare to FacebookShare to Pinterest
Labels: Paris

Great article on your point of view of being an expat in Paris. Although I'm only here for 30 days, I could identify.