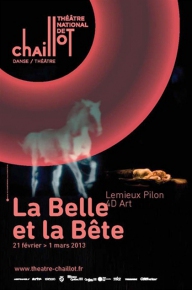 Qui suis je? Qui êtes vous? These are the questions asked over and over again by the narrator of le Michel Lemieux and Victor Pilon’s three-dimensional performance of the old French fairy tale, La Belle et le Bête. The 90 minutes of this wonderful production throw us mesmerizingly into the conundrum stirred up by these questions. 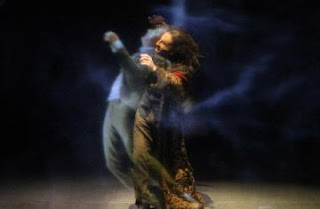 What does it mean to be human? What does it mean to be a woman? What does it mean to be an artist? But perhaps the most profound question asked by the performance is: Who are we when we are exposed to and then intoxicated by love and intimacy? As we watch, across the 90 minutes of the production, the beautiful woman becomes the beast as she abandons the man who will is willing die for her, without her. At least, this is what this version of the text seems to be saying: it doesn’t matter what we wear, it doesn’t matter what we look like, it doesn’t matter what our history, all that matters is who we are when pulled into the maelstrom and impossibility of romantic love. For the belle, the intense love and the passion between her and her prince-bête is made “impossible”, because it is secret. They must always meet in secret because he lives in the shadow of the shame of his looks. Interestingly, for those of us in the audience of Lemieux and Pilon’s production, the so called beast is beautiful even before we see his face thanks to the richness and texture of his voice. Even before the young woman sees him, we are seduced by him. When she then leaves him behind in his prison-like fortress, we are disappointed by her rejection of the secret love affair. 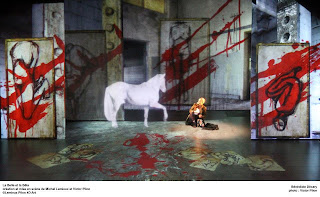 If the lovers are inebriated by the power of their love, what makes the production seductive for the audience, dreamy almost, to the point where I felt as though I was carried away in a tightly woven narrative film, is the mise-en-scène. The work is billed as a veritable inter-medial event. A lot of contemporary theatre is a mixture of theatre, dance, with video images used in exciting and integral ways. It’s interesting to think of La Belle et la Bête side by side The Master and Margarita, if only because I have seen them in consecutive weeks. While McBurney uses the video images to policitize and extend the theatrical stage, Lemieux and Pilon use them to move us into the unreal world of the fairytale. 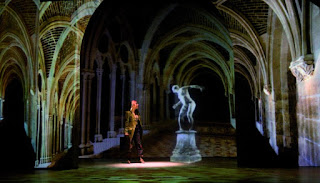 Many of the images used have the appearance of holograms, as well as highly defined digital and video images. There are only three flesh and blood actors in the production, while all the other characters – the young woman’s elder sisters, the beast as the prince charming, the white horse, as well as the sets — all appear in holograms and video images. The real bodied actors’ interaction with the images is extraordinary. I want to say it must be more difficult to make love to a hologram (as the belle does) than it is to do battle with a digital tiger in a lifeboat at sea. Although completely different in its construction and movement, like The Master and Margarita, the set here is entirely a projection of light. 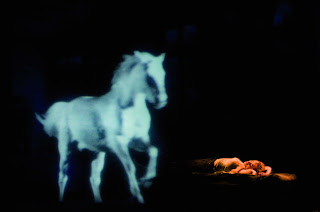 The intent to create “four dimensional art” through virtual sounds and images could so easily have been very tacky or sensational. But the movement in and out of reality and the fairytale, the girl’s travelling the distance between her studio and her lover’s palace, the passages in and out of memory, dream, the past and into the present were all skillfully done. As can be seen in among the scenes captured here, the most exciting scenes are those in which passions run high, the natural elements conspire to become expressions of the intensity between the lovers, and the audience becomes embroiled in the turmoil. For example, there is one scene in which she gets caught in the rain and the rain literally overtakes the auditorium as it is projected in all its cacophony in light, together with the dramatic score. 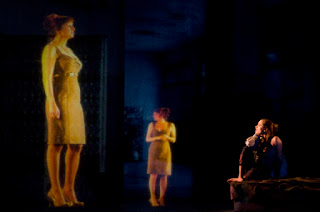 And lastly, one very subtle aspect of the piece that I enjoyed —especially because of its affinity to silent cinema from the 1920s and 1930s— is  that, like the fairytale in its most lucid form, Lemieux and Pilon’s La Belle et la Bête is about representation. The piece is about having one’s portrait painted, as the belle’s first reaction on seeing the beast’s face is to want to paint it. The beast agrees, but only in return for her own portrait. The struggle between them, as well as their love affair is set in motion by this desire to paint and to own a portrait of the other. Of course, portraiture is that classical genre that echoes the same question: who am I, who are you, how do I represent myself, and what will happen once I give my image to you.  Powerful stuff.

Friday night at the Louvre

It’s been so long since I went into the Louvre on a Friday night that not even sub-zero temperatures could keep me from finally going in last week.

I headed for the tiny space given over to American and British painting at the end of the halls and halls of Italian and Spanish painting in the Denon wing. The Louvre has been loaned three “emblematic” works of American genre painting that have given occasion to present a small exhibition, entitled Aux sources de la peinture de genre américaine. While the exhibition around the apparent origins of American genre painting was not fully convincing, the three American paintings were just wonderful. Even though they were not part of the exhibition, I also enjoyed seeing some of the British paintings from the same era on the opposite wall. The British paintings just happened to be hanging nearby, but because of their proximity, it was difficult not to think about the Turner, Constable and Gainsborough together with the three American works.

My favorite of the American works was Eastman Johnson’s Negro Life at the South, 1870. The painting is both unusual and fascinating because it is set in the back yard of a bar in Washington DC. At this time, it was most usual to find blacks on a plantation in the South, and similarly, unusual to see whole works given over to their culture. As the informative text that accompanied the painting at the Louvre tells us, these works were unusual because they depicted slaves, because they depict daily life, and because they chose not to represent history on a grand scale. Of course, the depiction of these black people is contradictory. The one man plays a banjo in the middle of the yard, a yard that becomes a stage onto which all the other participants in the scene look eagerly. While everyone appears to be relatively jovial, carefree, and well groomed if not richly dressed, the scene is one of squalor and poverty. The painting is also made curious by the intermingling of blacks and whites – even as slavery had just been abolished, it is rare to see blacks and whites happily co-existing. In painting as in life, this did not really happen for another one hundred years. I understood these contradictions as indicative of those that ran through America at this time more generally. Even though Johnson was painting in a post-abolitionist America, racism ran high and equality was still over one hundred years into the future.

George Caleb Bingham’s The Jolly Flatboatmen, 1877-78 was the other delightful painting on display at the Louvre. The blue of the sky is striking, as is the joy of the men transporting goods down the Mississippi. Again, like the Johnson painting, the men here are making music in celebration no doubt of a day’s work well done.  The Jolly Flatboatmen is also striking for its representation of everyday life, of workmen, not the privileged industrialists who were the more common subject of painting and other representations of the period. And, even more noticeable, is that Bingham celebrates working class life, unreservedly. The Louvre places Bingham’s work next to Jan Steen’s Festive Family Meal (1674) which exudes the same joy and celebration of working class life.
The British paintings exhibited opposite were painted in the same century, but tell of a very different world. The looming grey sky of Weymouth Bay with Approaching Storm is not only diametrically opposed in colour and tone to the open blue skies above the Mississippi, but this is a world in which all expression is mirrored in nature, not in the people who are placed at the centre of the narrative written by everyday life.  The distinction between the British and the American paintings can also be seen in, for example, the difference of J.M.W. Turner’s Landscape with a River and a Bay in the Distance” c. 1845. Even though here the scene is one of lightness and openness, the landscape is unsettled and in commotion, a commotion caught in the energy of the brushstroke. Turner was — in my eyes at least — renowned for daring to blur the horizon line in one of the most radical nineteenth century gestures towards abstraction. Thus, where land, sea and sky meet, where one finishes and the other begins is unclear in Turner’s landscape. And because we no longer have this line with which to measure our place within the world, there is so much uncertainty on a horizon that we can nevertheless not see.  This is in distinction to the very ordered and stable narratives told through the equally controlled and smooth painted surface of the American genre paintings.


I know the American genre paintings are not meant to be viewed through comparison to British Romanticism, but their display at the Louvre nevertheless invites such a reading. Ultimately, the juxtaposition lead me to recognize that despite the contradictions and unsettling nature of race representation and relations in a post-Abolition era, the world pictured is not only filled with apparent celebration, it is also certain, controlled and somewhat non-negotiable. Of course, even though Johnson and Bingham show courage to represent the otherwise invisible world of black America in the nineteenth century, the image must be necessarily compromised for the fear of what might happen if the truth be told.

Posted by Frances Guerin at 4:14 PM No comments: Links to this post