Ryoji Ikeda, +/- [ the infinite between 0 and 1], Museum Of Contemporary Art Tokyo

Back from Tokyo nearly three weeks now, and with one foot on the plane to NY, there are elements of my trip to Tokyo still on my mind. The Ryoji Ikeda exhibition at the Museum of Contemporary Art Tokyo being foremost among them.

Part of my attraction to Ikeda’s work is that I don’t really understand it. Something about his engagement with the infinite makes it impossible to grasp, let alone master in the way we like to with art. I have been reading Jeanette Winterson’s Art and Objects which has brought me back to why it is that I write, why I look at art, why I write about art, and how my relationship to art is at the core of who I am. I go to see myself in art, and it is my goal, always, to lay myself open to art as a gesture of my humility to the world. I look to it to move me, to challenge me, to change my view on the world, to tell me who I am, who I could be. Winterson is interested in the relationship between me and a painting, me and my writing, me and all art, a relationship that exists purely, at a level beneath consciousness, in a place “where the balance of an ordinary day is overturned.” Great art strives in the breakdown between language and our emotional state. I believe Winterson. 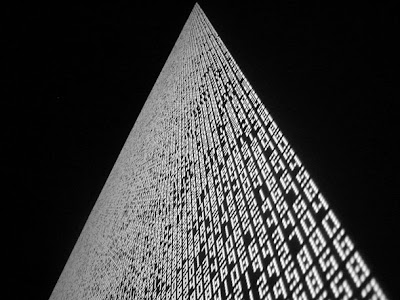 However, this is not what Ikeda is doing. Still it is great art. Because he visualizes something which cannot be visualized. He gives the experience of a reality outside of the time and space of my daily life, a reality that exists only in the intensity of the relationship between me and the work, the point at which vision, audition, tactility is no longer. It’s something like an experience of the sublime, but unlike the sublime, I do not turn away from Ikeda’s works in the same instant that I experience their “beauty.” Rather, I recoil slowly, reluctantly, as they imperceptibly and gradually disturb me.

Ikeda imagines another kind of not looking. It’s distinct from the relay of glances around Velasquez’ Las Meninas. Or the consumption of distraction that is captured so imaginatively in Thomas Struth’s photographs of the same paintings. And it’s different again from the kind of not looking that we confront in Paul Strand’s Blind in which only one of us owns up to looking, the photograph seeing us through blind eyes. In Ikeda, we find a kind of not looking that is somewhere between that of conceptual art — in which there is nothing to see — and the turning away from a very violent image because it is too painful to watch. This is a sensory experience that is constantly mitigated by the desire to master, and to know what it is we cannot see. Because we never really let go to the senses, always insisting on comprehending the incomprehensible. Likewise, this same desire to rationalize is relentlessly stymied by the nauseating discomfort that pushes away when the sounds start to become recognizeable as sine waves, and we are blinded by the strobe effect of the constant turning over of pixels and data. 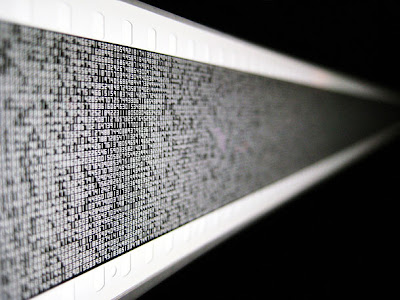 Ironically, this ineffability that is realized through the tension between medium (sound and light) and our desire to rationalize is best illustrated in the most tactile of his works. Take, for example, the transcendental (e) [no. 2-a], 2009 in which an infinite series of numbers is etched into a stainless steel plinth, and Data Film [no.1-a], 2007, a light sensitive film strip bearing the same infinite series of numbers against a light box strip that runs the length of the room. In both works we are drawn up close, physically, studying them for logic, familiarity, for a single place from which to hear and see. Our inability to see, even though we are right up close, is just the point, both the form and the media are endless enigmas, transcending anything we could ever cognize. And still I tried. As I watched myself looking up close to the film strip – I saw the absurdity of it – what did I think I was seeing or, better still, looking at? Whatever it is, takes me way beyond my existing perceptual experiences, and thus, maybe Winterson is right after all. Maybe the real insights of Ikeda’s work come from not looking, hearing, or thinking. What we really need to “see” is that the subliminal experience of being in the presence of these compositions in sound and light take us to another realm. Because Ikeda’s sounds and images are located outside the limits of perception, cognition, they are other to our familiar perceptual and linguistic dominion. First they conjure and then they curtail our sovereign gaze, our pretentions to omniscient authority, only to ask us not to look, not to hear, not to speak, not to think, but simply to “be.” These works ask us to experience the limits as they are on display, and as a consequence, experience our own boldily and perceptual limits. This is an environment that requires a whole new experience of art, and in turn, a whole new experience of ourselves.
That’s what makes them masterpieces.
Posted by Frances Guerin at 1:32 PM No comments: Links to this post

While the world is raising its shackles about the unremitting violence, evil, and mostly, the genital mutilation of Lars von Trier's latest (slasher) movie, I find myself not able to get too excited by the hype. Yes, it's confrontational, yes, it's a travesty rather than an allegory, yes it's a journey into excess. There's no arguing with the critics, but it is for other reasons that I find it offensive. Even though I squirmed in my seat as the Charlotte Gainsbourg character commits unthinkable violence against her husband — the expressive as ever Willem Dafoe — when I leave the movie theater, I can let all that pass me by. Afterall, that's what the movies are all about - going to places that we haven't yet grappled with in daily conscious life. What I found very disturbing, however, was the ending.

Willem Dafoe hobbles to safety, leaving the cabin, named Eden, where he had strangled his wife because of the threat her wayward imaginings —supposedly an expression of her guilt for her dead child — poses to human kind and his life. As the camera pulls away, all of the women who were slaved, slaughtered and sacrificed in the medieval texts and legends that the woman was studying for her thesis are brought back to life. All of this is covered in a blanket of mist, through a blue tinted lens, and sung to the tunes of Handel's aria, Rinaldo, lascia ch'io pianga. The painful torture of the soul which is expressed in Handel's music is transformed into a feeling of freedom, an emotional and psychological release from the hell of events at Eden.

Irrespective of her psychopathic state, and her tortuous cruelty towards herself and her husband, I take real offense to the idea that a husband's strangulation of his wife will bring about the salvation of all women. The film is uneven and more interested in shocking its viewer than delivering a provocative allegorical reflection on grief, mourning, pain and the inner life. So it could be argued that I have misread the ending. However, even if this is not the narrative logic, the mere suggestion that the history of gynocide be revised in the wake of the Dafoe's actions, is not a palatable image in the twenty-first century.
Posted by Frances Guerin at 6:56 PM No comments: Links to this post 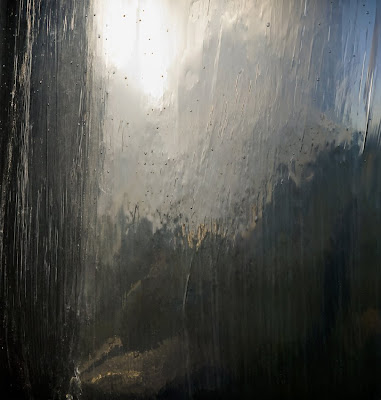 With great excitement, last Friday, Georgia and I went on our gallery gallavant for the first time in a month. I shall refrain from bemoaning the paucity of worthwhile art, and instead, dwell on the positive! One of the highlights of our meanderings was Tania Mouraud’s Borderland at galerie Dominique Fiat. And, while the problem with most of the other work we saw was its superficiality, Mouraud’s work stands out for its exploration of the surface.
These photographs are not what they appear to be. Apparently she found a stack of black plastic covered hay bails on the side of the road and set about photographing them. The result is mesmerizing for the vast array of differences between the individual photographs. Each of the images captures the reflection of the surrounding landscape on the surface of the plastic and of the photographic image from a different perspective, at a different time of day, in different weather conditions. As such, the photographs become like stages on which nature, the technology of the camera and the plastic material play out their unlikely meeting. Some of the abstract images reminded me of Gerhard Richter’s overpainted photographs — so, of course, I loved them. Others, however, look like the view of the countryside through a window on a rainy day. Still others look like cubist paintings or collages, and still others like impressionist watercolors. If we were not aware of what they were, we could be forgiven for mistaking them as photographs of reflected water. Whatever the associations we bring to them, the photographs discourse on the curious relationship between reflected light, water, landscape, and representation.

They are as diverse as they are superficial. Indeed, the play between the sameness of the subject matter and the difference of each image is what holds us: we keep looking to see if we can find the consistency between the images. And we can’t. This play between diversity and sameness is also underlined by the fact that they all come in different sizes and proportions, many of them unusual shapes for c-print photographs. Mouraud’s manipulation of the size is a way of further making strange the photograph, strange in the same way that the scene is made strange by the photograph. This constant return of the concerns of the photographs and of photography to the surface of the image, is what makes them a cut above much of the superficial images that pass for art in the Marais.
Posted by Frances Guerin at 11:24 PM No comments: Links to this post