Louis-Léopold Boilly was a revolutionary artist, in all senses of the word. His oeuvre sits between two revolutions—those of 1789 and 1848—and so it's not surprising that he often depicts the people of the streets. Unlike painters and portraitists of his and previous generations in France, Boilly had a suspicious view of the bourgeoisie, the police, the army. His real subject matter was everyday life. Moreover, it was everyday life on the streets of the city.

Most exciting about Boilly's painting was his thirst for new technologies and what they could bring to painting. I knew enough about his work from the pieces in the Louvre to know that he was pushing at the boundaries between painting and theatre, but what is revealed in full scale over and over again in this current exhibition at the Musée Cognacq-Jay is the way that Boilly looked forward to the cinematic image.

In painting after painting, Boilly plays with what will become the defining characterstic of the cinema two hundred years later. His figures look from different perspectives, in motion, in scenes that give the illusion of motion. In Le prison des Madelonnettes, rue des Fontaines, for example, he juxtaposes light and shadow in the two halves of the painting and each is filled with people and their pursuit of morally good and bad activities respectively. Looking at this work, we also get a sense of a developing narrative unfolding across the width of a painting, statues being brought to life, in two halves that are like scenes whose relationship is only established in the image itself.

Visitors to the exhibition will also notice that Boilly was fascinated with illusion, with effect, with expression as a way to attract a response. There are doublings and mirrorings everywhere in his work. His figures have exquisitely painted faces filled with emotions and expressions, the fabrics of their clothes are so textured that we want to touch them. But the bodies are often distorted, misshapen, slightly out of proportion. It is as if they are being seen through a distorting lens. And then in the final room of the exhibition, there is the object that the whole thing has been moving towards: a camera obscura and a selection of early optical toys—a zograscope, telescope, a pantographe. These are the instruments Boilly used to see the world differently, through new optics, that he then translated into painting. It's easy to imagine that had Boilly lived one hundred years later, he might have turned to the cinema for his artistic expression.

Perhaps the reason that Boilly is not as well known today is his diversity and range. He moved from portraits to genre paintings, to city scapes, trompe l'oeil, caricatures and still life. Boilly never sat still long enough to develop a reputation for anything. Similarly, he painted the kinds of people that the salons had no interest in: prostitutes, criminals, poor artists such as himself, those mixed up in the hustle and bustle of the train station. In this, his voracious appetite for experimentation and innovation made him so far ahead of his time that no one would have known what to do with him.

Ultimately, this lovely exhibition shows Boilly to be a man of his age, but as such, he is a man ahead of his time. Boilly was inspired by streets taken over by masses of people, by train stations and street dwellers. And he was interested in depicting his modern world through the instruments of his time. He blurred the boundaries between mediums where painting and photography (hence the grey of his works) and sculpture are brought to life. His depictions of theatre in the streets, together with multi-perspectival pictures that preface the cinema made him a man reaching for modernity on the streets of Paris, even before it had fully arrived.

Posted by Frances Guerin at 4:56 PM No comments:

I loved the Jean Painlevé exhibition at the Jeu de Paume, if only for its offer of the opportunity to see these strange films on the big screen. There are a number of short films, many of which will be unique and revelatory to viewers. True to their intentions, the films are educative on many levels. We learn about male sea horses giving birth, watch octopuses mate, examine various oils under microscopes (mainly kaleidoscopic drops exploding like fireworks), and marvel at the effect of light on sea urchins. Some of the documents of flowers and other natural phenomena, accelerated to show slow evolution and natural processes in minutes of film were also fascinating for their resonance with early experimental film and new objectivity photography.

Also wonderful was the exploration of the cinema in these films. Painlevé was concerned to educate and convey information, but he was just as focussed on exploring the possibilities of the cinema which, in his time, had not yet been fully revealed. In images that in which sea creatures merge into their environment or flowers /plants bloom, and asteroids move around the sky, Painlevé uses natural events to explore the possibilities of the camera. The beauty of his manipulation of light and dark, the framing, the keen awareness of the cinema's ability to manipulate time and space were all quite breathtaking. Painlevé may have been trained as a scientist, but he also had a keen sense of the way that images work.

More disappointing, however, was the exhibition's contextualization of Painlevé's experiments. The films are presented as objective documentary records of Painlevé's scientific experiments and research. Thus, there is little to no mention of the staging of the films. Because of the way that Painlevé filmed, namely, removing the manipulation of the pro-filmic, we watch sea horses in their life cycles as if Painlevé was underwater with them. The removal of the marine life from their natural habitat, their placement in tanks, the staging and manipulation of the animals, clearly compromised, or at least, contributed to the definition of the kind of documentary film that he was making. This isn't to detract from the splendour of his images, or the amount that we learn from watching the films. Rather, it speaks more my disappointment that there was not enough information on what these films were actually doing.

Another, related, thing that is not acknowledged by the exhibition is the historical moment of the cinema in which he was making these films. Painlevé was filming at a time when the lines between fiction and documentary, between experimental and documentary were not yet fully drawn or defined. Theorists were still trying to come to terms with what the cinema was about in this moment, and Painlevé was one of the experimenters asking these questions. Thus, his contribution to the very important debates about the cinema is elided in this otherwise fascinating exhibition

Posted by Frances Guerin at 8:06 PM No comments:

I am such a fan of Tatiana Trouvé's The Guardian sculptures that I would travel around the world to see one of these quietly, contemplative chairs resting in a corner of an exhibition. The handful included in the current Pompidou exhibition are gorgeous. It is all I can do to stop myself sitting down, sinking into a wicker seat to rest my weary legs. As I stand there, I want to rifle through the open bag on the chair, throw the cardigan around my shoulders and read the interesting books. That is, having cleaned away the cigarette box used as an ashtray to make way for myself on the seat.

In the Pompidou exhibition, as always, The Guardian examples sit quietly, unassumingly, at the edges of the room, to the side of the other works. I waited and watched other visitors, only to see them ignore the seats filled with someone's belongings. They chairs are so understated and discrete, to the point where they don't ask to be looked at like art works. And yet, they are art works. They are intricately crafted from bronze, marble, onyx, brass and sodalite. The sculptures are fascinating and inviting when we recognize the work that has gone into making hard, inflexible materials into lusciously soft fabrics and objects.
The sculptures are also compelling because they are simultaneously life like and not. Their placement against the wall, aside from the other works makes them appear to me as if they belong to the attendant who has just slipped out for a moment. There is always a book, a bag, a personal item, usually cast in sensuous marble, sitting on the seat. They show more than the traces of human presence, tell of beings more real than ghosts of the past. These are the chairs of people who have just popped out, with all the signs of "I'll be back" left on the seat. They speak of an immanent presence. They are also about the people and things that are invisible: the sculptures themselves are invisible to some visitors, as if they are or were occupied by an invisible guard, those tireless museum workers whose presence allows us to be in the company of fragile art works. 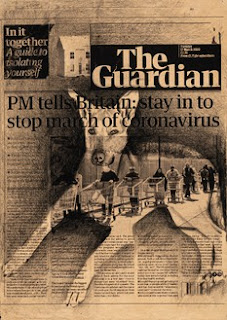 This exhibition also includes a wall of Trouvé's lockdown drawings that she made on the covers of the world's leading newspapers. Trouvé draws her bed, her dog, her wardrobe, her everyday life in her studio over the top of the dramatic headlines that accompanied us through the months from March to May (2020). The superimposition of the everyday over the devastating news of death and disease, the recounting of numbers and alarming headlines often acting as warnings, makes obvious sense. This is how we all lived in lockdown; our ordinary lives and a world in crisis outside our doors overlaid each other for months on end. As I browsed the warnings of war, death knells and governments on their knees, I was astounded at how far away it all seemed. When I think about how consumed we all were by statistics, masks, government restrictions, and vaccines, and yet, today, most days, it doesn't even cross my mind that we are not even one year out of a global pandemic.

Posted by Frances Guerin at 4:05 PM No comments: