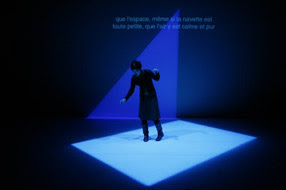 I have never seen anything quite like this piece of theater. A group of young - late 20s/early 30s - disaffected Japanese people, on an all but empty stage, talking to themselves and us about an encounter between a man and a woman and the next five days they spend together. The meet in a night club, go to a love hotel and never know each other's names. We are told the events take place on March 21, 2003, the eve of the British and American offensive in Iraq. Outside the love hotel, on the streets below, a demonstration against Japan's involvement in war for the first time since 1945 takes place.

The actors looked and dressed no different from the young people we see on the street everyday in Japan. And their behaviors, gaits and expressions reminded me of my students: slouched, not looking each other in the eye, and so on. Identical. However, their body movements were distinct. Tiny gestures that seemed to be independent of the narratives being woven by their conversations, like nervous tics and slight contortions that reveal their awkwardness with themselves and each other. Somehow, at the same time, these body movements were also exaggerated, if understated. Of course, the movements were carefully choreographed so that by the end of the performance, I recognized how difficult these movements must have been. Apparently they were talking in colloquial Japanese - I had to rely on the French surtitles which didn't capture any colloquialism.

Nevertheless, the piece captured the aimlessness and the seeming inconsequence of these youths' everyday lives and concerns. Even though it was specifically Japanese, not speaking the language, as I say, it spoke way beyond Japan, about a generation living in the midst of war and other crises, in a precarious and hesitating reality.
Posted by Frances Guerin at 1:15 AM