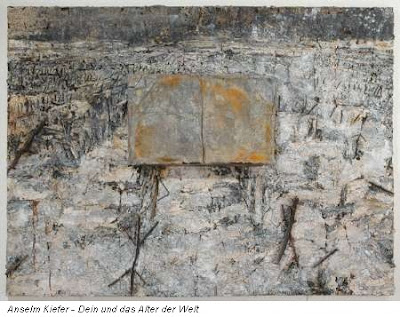 Anselm Kiefer has been making lead sculptural books for over thirty years now. In the 1970s and 1980s, Kiefer’s monumental lead libraries became immoveable fixtures in the museums and galleries that owned them. Characteristic of Kiefer’s oeuvre, the intransigence, fixity and immobility of epic lead books was thrown into conflict with the ephemerality and ineffability of the organic hair, straw, sand and earth written on the pages of Germany’s troubled past on which these books discoursed. Kiefer’s books are monumental not just in size. They embrace an infinity of materials, meanings, media and histories. They are about painting, about sculpture, books, indeed images and texts of all kinds. They blur the line between the symbolic and the real, the past and the present, heaven and earth, death and regeneration, violence and serenity and on and on. The scale of these works is inconceivable, and it is not only their size and their ambition. But unlike any other artworks in circulation and on exhibition today, Anselm Kiefer’s books hark back to the possibility of the redemptive power of art, and in particular, of a marriage between landscape painting and the book as an evocative metaphor for the communication of collective knowledge. 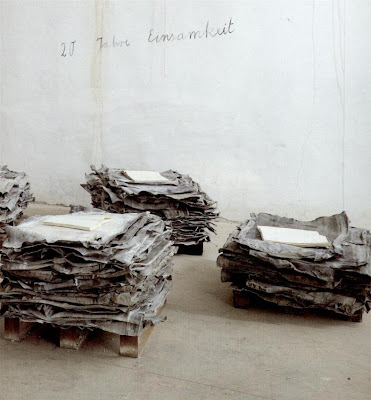 In the lead sculptural books of the last 15 years — eg. Dein und das Alter der Welt and Fünfundzwanzig Jahre Einsamkeit (1998), Buch mit Flügen, 1992-1994 — Kiefer moves outward from his earlier concern with the traumas of German history, the charred landscape of Germany and its cultural manifestations, concerns at the heart of his monumental lead libraries of the 1970s and 1980s. He books begin to embrace the world of our present relationship to images and books: he instantiates a complicated marriage of image and word, image and object, a marriage that becomes the most evocative metaphor for the communication (and lack thereof) of collective knowledge, memory and myth today.

The sculptures and sculptural paintings turn to the past, to the decaying and dilapidating history of worlds, artistic media and forms, places and things that apparently no longer matter. Kiefer’s books reflect on the dilemma of images and words, seeing and knowing, the real and the symbolic, the mystical and the scientific in the historical world that surrounds them. The books of paintings, painted books, books on canvas, dishevelled (usually lead) leaves hastily bundled together and left as if to rot on the floor of a museum, are placed in dialogue with a world in which we no longer respect the integrity of images, objects or words. It is a world in which images assume the philosophical characteristics of documentary texts, texts are rendered imagistic – on the World Wide Web, on the television nightly news, on advertising billboards that litter our roads. Likewise, we no longer read books, we look at them, they are objects for display in a library, they are metaphors for the understanding of a grand, secreted epistemological weight – written in lead, of the past. The apparent grace and elegance of Kiefer’s lead books simultaneously sees them fly; they are weightless and ephemeral, sacred altars to the possibility of spiritual fullfilment. They hold within them the redemptive power of art in an age when such a promise has long been abandoned.
Posted by Frances Guerin at 11:30 PM