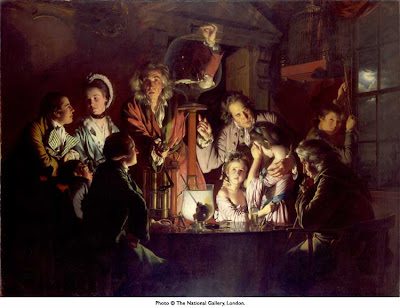 As a student of silent cinema, I remember reading that this painting was somehow cinematic. At the time, I was captivated by the light, by the huge looming shadow cast by the scientist, or is it the glass bell that is in the process of suffocating the bird? Seeing this extraordinary painting again at the National Gallery in London last week, I have no doubts as to why it might be more at home in the cinema than in the hallowed halls of the art museum. Everything about it speaks its kinship with the art form that would not be invented for another 130 years. I was struck last week by how dark it is. It’s not only in the reproduction that that the events have a clandestine feel thanks to the chiaroscuro lighting. The light source looks as though it is behind the beaker of fluid containing an already dead animal on the table. And maybe it is the brightness of the light that will kill the bird? The illumination of the audience gathered around the table, in its contrast with darkness, gives the event the appearance of the most underground of secret activities in a film noir hideout. There is something illicit about the scientific act as it is performed for an audience engaged to varying degrees, exhibiting a range of emotions from horror through disinterest to wonder. Although brought together around the magical act of the suffocation of a bird, the lighting gives each an individuality, the same individuality that the darkness takes away from us in the cinema. The couple on the left, more interested in each other (as lovers often are in the cinema), the young girls, one fascinated the other terrified, the man on the right quietly contemplative, in his own world, and the two on the left, gracious, dutifully watching and waiting. My favorite figure is that of the young boy at the window. Is he opening or closing the curtain? Is his face lit by the remnants of light from the table, or the luminescence of the moon? He is the “man behind the scenes,” the real master of appearance and illusion. And as if another character in the drama we watch, the moon mysteriously shines in from behind clouds. As such it predicts the death of the poor bird in the name of science and entertainment.

As well as the extraordinary lighting that brings alive the figures as audience to the experiment, the figures are also actors in the painting, the painting which is the drama that we watch. We follow the movement of the glances around the room: just like the cinema, there is no single consistent focal point. Even if there is an illusion of stasis in the form of a two-dimensional painting, the reality is one of motion as emotions are ignited. And we read and understand these emotions through the dynamism of each individual gaze, each individual response to the horror and wonder of what is being revealed to them.
Posted by Frances Guerin at 1:07 AM