Individuality in the Light, Donald Judd and The Chinati Foundation, Marfa 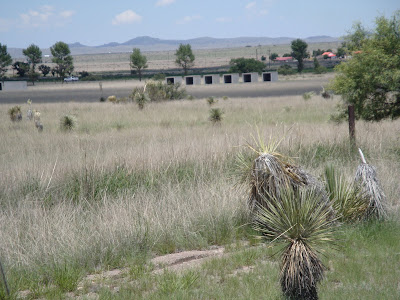 Today we made our long anticipated visit to the Chinati Foundation, an experience for which we drove 1000 miles. While the Chinati’s centerpiece, Donald Judd’s 100 untitled works in mill aluminum (1982-1986) installed in former artillery sheds, is a once in a lifetime experience, I found most of the works here underwhelming. I am not much of a fan of Minimalist art, and the Chinati didn’t really do much to change my mind. Overall, it was a disappointing experience, with a couple of exceptions. 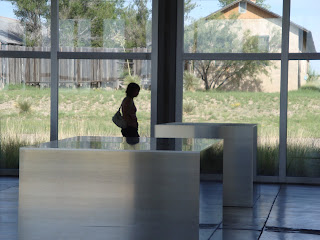 The primary reason to make the pilgrimage out to Marfa in far West Texas is to experience the 100 Donald Judd sculptures in installation, and to watch them sing in the desert sunlight. Light, steel, architecture, and the order left over by a departed army come together in the row upon row of identically-sized (41 x 51 x 72 inches) aluminium boxes. Their glory lies in their dance with light as it beams through the windows, windows whose quartered frames echo the order and grid of the boxes. While each box is different — some are open to the sun, others turned away from it, some reflect, others refract the light of the sun and the desert outside — they are brought together in a rhythmical chorus of the light as it floods the former army barracks. Outside, the desert is expansive, powerful and resilient to the shifting of time as it is measured in light on the faces of these boxes.

Inspite of the thrill of experiencing Judd’s installation, the visit to Chinati is not without its frustrations. Access to the collection is only possible in a group with a tour guide. Like any guided tour, this means that time spent with the works is limited and impoverished. At any one time, there are about ten people in the room, and at all times, the guide was eagerly waiting on the doorstep of the building to lock the door and move on to the next one. 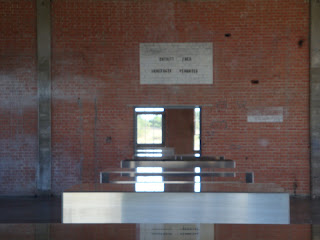 Our guide, a young art history student could have come straight from her other job as a New York City waitress. She was very pleasant, but had an attitude of being better than her customers. Like any good downtown NYC waitress, she gave the impression she was meant to be somewhere bigger and better. Sadly, her air of self-confidence was not matched by a knowledge of the works on display. As another young woman on our tour remarked, “the guide was no more than a human version of the title cards that are usually on display in a museum.” Given that the Chinati collection represents the privately-owned and commissioned works of a single artist, Donald Judd, it seems essential to give visitors some background information on why Judd chose and commissioned the works he did, what interested him in the works of, for example, John Wesley, works that otherwise seemed very out 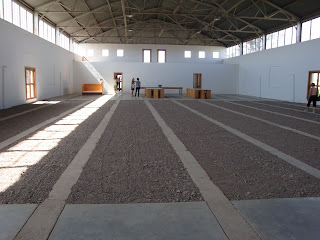 of place in what is supposed to be a Mecca to Minimalism? And how do Ilya Kabakov’s works which are infused with memory, nostalgia, politics, the USSR, and an effacement of the present, make sense in their new home of the Texan desert? A young man on my tour commented that the exhibitions would be better if he knew more about minimalism. But isn’t this the function of the gallery guide? To pique the curiosity of those who visit, to answer questions, and to give us things to tell our friends? Not our intern at Chinati. Despite her supercilious attitude, she clearly was uninformed about the subject matter and unable to answer questions. 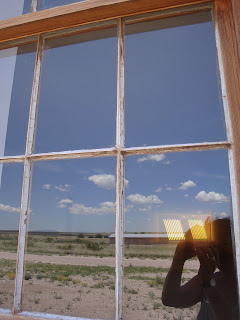 For me, Minimalism is a complicated phenomenon and the works at Chinati complicate it even further. However, these complexities were not even hinted at by our tour guide’s one-dimensional introduction to each building. Even a basic conception of Minimalism would direct visitors towards the contradiction of the idiosyncratic choice of art works fashioned into a “performance” of Donald Judd’s vision of great art. Even Judd’s 100 untitled works with its aestheticization of steel through an interaction with the sun to produce an hallucinogenic experience is far from the paring down and removal of affect that was the motivation of the movement. Just this information would have made for a far richer and more memorable experience of Chinati.

Given the difficulties of viewing and understanding of the works on display, why would one want to come all the way out here to Marfa? Because the whole experience of art in the desert light is, as I say, a once in a lifetime opportunity. In addition, the uniqueness of the Chinati visit comes in its presentation of entire buildings filled with the work of one artist. The trashed cars of John Chamberlin, for example, take on a new dimension, and I began to have a new appreciation of works that I had always dismissed when a single one sat next to a painting in an art gallery. Together, like the Judd sculptures, they begin 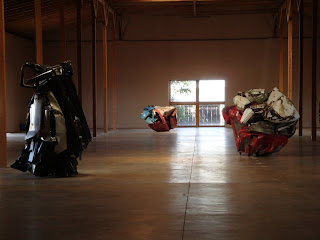 to chatter with the architecture, they speak to the sunlight and the desert, elements that give the works a new home, here at Marfa, with each other. That makes it special out here on the Mexican border, in a place that is, otherwise, nowhere. Ironically, of course, this interaction with and dependence on the world around it is, once again, antithetical to the goals of Minimalist Art. Perhaps though, this is not the point of Chinati, and it is quite simply, a satellite station on another planet, a station owned, produced and performed by a single great figure, the artist Donald Judd.
Posted by Frances Guerin at 7:13 AM