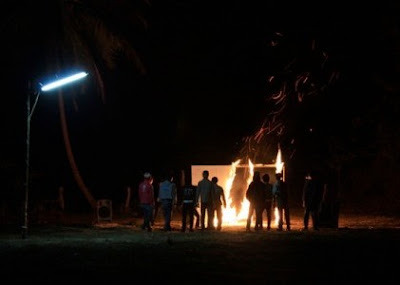 At the entrance to the installation Primitive, there is a 10 minute film Phantoms of Nabua (2009) that is conceived as a preface or exposition to the forms and ideas of the larger installation. (Click on the link to see the Film)

I couldn’t help seeing this film as encapsulating everything that interests me and seduces me about the cinema. I have seen Apichatpong Weerasethakul’s films before in the movie theater, and was so much more taken and entranced by these examples in the gallery. I wonder if they aren’t in fact more appropriate to the context of the gallery, even though everything about them is cinematic. This ten minute film, Phantoms of Nabua is all about light: fire —in flames and cinders— neon, electrical, light of the projector, and lightening as it is projected on a screen that is the backdrop to the profilmic reality. The film is, in many ways, a poem of light, an ode to light, as these everyday lights dance together, the one replacing the other, making patterns, light made into an object, creating and destroying illusions. And perhaps the most fascinating thing about the lights in this film? They never illuminate the scene. Light might be the film’s protagonist, but it is a protagonist who remains true to its realist dimensions, and simultaneously, departs from our expectations of it. 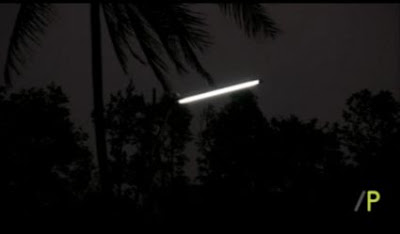 The film opens with a shot of a neon street light against a luminescent blue night sky. The camera finds the image of lighting on a screen in an expanse of wasteland. A group of young men kick a log around in the foreground of the screen. The two worlds, the one on the screen, the one before the screen apparently have nothing to do with each other. And then the screen catches aflame, it becomes an object, and the men do not extinguish it, they watch it burn, waste away. It is as though now that the screen is an object it warrants their attention, whereas before when the parade of images were projected onto it, there was nothing of interest to look at. And then as the screen becomes ash, blowing away in the gentle night wind, the light of the projector behind what was once the screen flickers. The film continues to run, but with no screen to fall on. All illusions are incinerated, but behind the illusions there is just another empty light. We can still hear the soundtrack of the image as it runs through the projector: the thunder of the film that no longer exists, is so distinct, and in place of the lightening we see the flickering light of the projector. Is this the end of cinema, or the end of illusion? 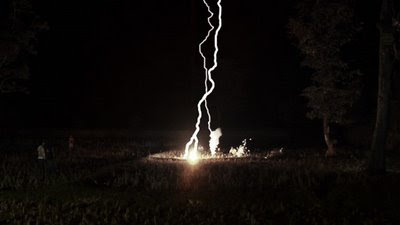 Phantoms of Nabua is about watching films within films, films on films, the image we watch continually being reduced to no more than a surface as the drama of the lightening on the projected screen starts to resemble something we would see in Dr Frankenstein’s laboratory, sparks flying, exploding, and yet, of course, as we watch the light, the film becomes about the difficulty of seeing. Again, somewhat ironically for a film that is such a drama of light, lighting and lightening, we never see the young men, even as they use a log on fire as a football. We know they are young men, but that’s as far as we can go to defining their presence. 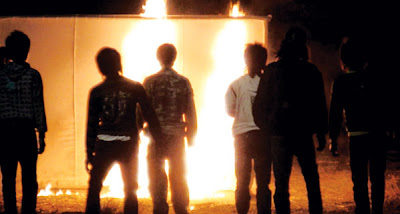 Like the figures of the young men, the themes of anger, memory, the past and history are kept in the shadows here. We know they are there because the title alerts us to their presence, but we have little access to them. Nabua was the site of a bloody battle between local communist farmers and the Thai totalitarian government in August 1965, resulting in a longstanding and brutal occupation by the army. If Phantoms of Nabua is an exposition of what is to follow in Primitive, then its concerns with light--natural light, neon light, electrical light, daylight, fire light-- which stay in the darkness, then the history of national destruction and trauma might be everywhere addressed in the exhibition, but they are nowhere to be seen. And I have to say, this is not because the real history is obfuscated, but rather, a subtle rendering through experimental film ensures that they remain spectres that haunt every vision, but refuse to satisfy our desire to know more.

It is a rare occasion to find such powerful and intelligent filmmaking either in the museum or the theater, and to appreciate the force of Phantoms of Nabua as exposition to the installation, a word of warning. It’s important to approach the exhibition through its main entrance (as opposed to via the Albert Oehlen exhibition next door).
Posted by Frances Guerin at 12:00 AM