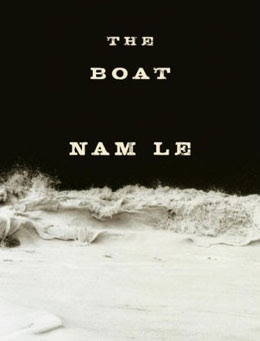 I don’t often write about seeing the world through Australian eyes, and neither do I make a habit of writing about literature. But, swept up as I have been in the applause for Nam Le’s The Boat, I can’t resist having an opinion about both. Le’s book has been celebrated internationally like that of few other first time writers. Of course, this applause was bait enough for me to read the work of a Vietnamese-Australian with an education not so different from my own: private single-sex school, Melbourne University, graduate school in the US, all of which buys to a ticket to wander the world.

Le’s stories move between Tehran and Columbia, Hiroshima and small-town Australia, spanning the second half of the twentieth-century, roaming through different realities, seen from different perspectives, taking place in the past and the present, in the imagination and the concrete, undeniable world of emotional reality. Many of the book’s supporters marvel at Le’s extraordinary gift of bringing so many different voices, of all ages, of all personalities, surrounded by diverse political and historical situations together onto the same page, into the shared space of a single story’s reality. This skill is without question worthy of the awe and praise that it has received. What strikes me about this same aspect of Le’s work is a peculiar kind of Australian nomadism

Le describes his work as “all over the shop”, a more humble description for the easy wandering of these stories across nations, generations, decades and points of view. This sense of nomadism is all over the page, it’s not simply something that comes through in the different character’s lives across different stories. On a single page, Le moves effortlessly between places and times, subjectivities and modes of language, with abandon. This is both his youthfulness as a writer — it speaks an energy and a carefreeness that an older writer might not have in reserve — and, for me, it is also about being an Australian living in other worlds. 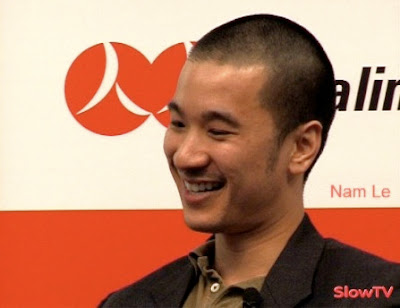 I asked him about this aspect of his writing last night at the Village Voice and he rejected my claim. He sees himself as writing in English, he’s not Vietnamese and he’s not Australian. He’s a writer working with the English language, or so he says. While every word, every sentence of his stories is mature and adroitly constructed, his sense of his own writing expresses a certain naivety. Le is adamant that he will not be put in a box, that he avoids all efforts to categorize his presence in the writing and on the literary stage. This may well be so, however, I would argue that his freedom is the privilege of being Vietnamese-Australian on the world literary scene. It’s difficult to imagine these short stories by a writer who does not have the immigrant experience. And it’s equally difficult to imagine, for example, a Chinese-American writing about the immigrant experience, but not referencing Chinese culture in America. And Le is surely naïve if he forgets that while the prestige accorded his work has come with prize money from the Australian government that will support him as a writer, young American writers don’t have such luxuries: they are all teaching and editing and making a living to support first themselves, and then their writing. As a result they are under increasing pressure to have a style, a genre, a recognizeable trademark that can be used for marketing purposes. While I certainly don’t want to imprison Le and his book, the freedom to write as his characters and their stories write him, seems to me to have everything to do with being an Australian of Vietnamese origin who continues to wander, both within his imagination and around the world. The liberty to say what he wants, to have opinions on such diverse worlds, peoples and cultures is the privilege of an expatriate who is not called to observe the social and moral form of one who lives in his or her culture of origin.

All of this said, ultimately, these stories are about so much more than being a 14 year old Columbian assassin or an aging New York artist with anal hemaroids. Their power and immediacy lies in the relationships, usually within families, often abusive or eclipsed by trauma, relationships that unfold when Le puts his characters in extreme circumstances. There is a darkness and a tragedy that pervades these stories, even if it is delicately placed behind a veil of unpredictable circumstances amid the semblance of normality. Even this has something of the Australian in it, the hiding of vulnerability and emotions behind the “A-grade attitude” that is the cultural expectation. Thus, on every level, Le is, despite his own protestations, every inch an Australian writer.
Posted by Frances Guerin at 3:50 PM

I think any questions about identity strike a writer strangely. My sense is that most writers see themselves as just writers and hence refuse the boxes around them. But they know, personally, that what they produce is marketed in particularly ways by agents and publishers and bookstores. This is the reality of writing and publishing, as much as we would wish for a more romanticized experience of a writer working alone at his craft. Nam Le knows this, but to recognize it would be to corrupt the whole process of writing as art, I suspect.

All writers are situated in their culture and the processes of publishing. Nam Le's privileged education in Australia and his graduate education at Iowa, has shaped his writing as well. So it is strange to think of him as somehow a wandering, immigrant writer for his stories emerge from a creative life that was shaped and supported by experiences found most acutely in the wealth of the West. But can any writer really recognize this?

I hear what you say about the identity of the writer, and it reflects back to me how much of an academic I am. It's hard not to see the box I inhabit!

I agree, he has a Western story of privilege with certain class definition. The fact that he left Vietnam before he was even one year old says it all - the Vietnamese-Australian writer is the marketing strategy. But he also spoke Vietnamese to some people in the audience the other night - which tells me, he grew up in a Vietnamese household, with Vietnamese customs and probably cooking (lucky him!) That must, on some level, inflect his identity and his ethnicity. But you are right, he is very Western