A Vicarious Parisian in October

October is the month that we foreigners begin to feel like Parisians. October is the month when Parisians hunker down and immerse themselves into the routines of daily life. October is like few others months in Paris because there is very little talk of holidays as summer is now in the past, and Christmas still on a distant horizon. And unlike November and May, the other months in transition, there are no public holidays in October. The only holidays to be had are those forced on us by a government that insists on lowering the retirement age, and therefore, drives workers into the streets, thus businesses to close day after day. The obligatory strikes and demonstrations that are the fabric of Parisian life aside, October is a month consumed by life as usual.  Similarly, all of the things that come hand in hand with life as usual in Paris are lived with gusto in October.
In October I commute on the Eurostar to the United Kingdom to do my job. For an expatriate in Paris, the Eurostar is a part of daily life. We all seem to be on that train, to know its timetables, and to be relieved that it does not get affected by the French wont to go on strike. And because I am in the UK for part of each week, coming home to Paris is all the more enjoyable. Even at those times when I feel most acutely that I don’t belong here, even though I am so obviously a foreigner, I love Paris in October even more than I do in other months. 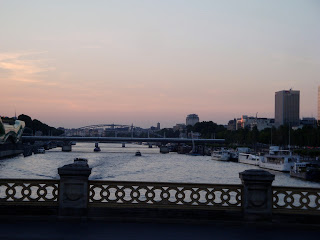 While they all slide into their routines and prepare for the winter ahead, October is a month that also sees me partake in rituals I have experienced nowhere but Paris. October is the month when I have no choice but to do what they do. I always thought I was alone, until I spoke to a Parisian friend who assured me that it’s a shared tradition to spend most of October wondering daily if the winter clothes can be taken out of storage and the summer ones put away. While the Paris Fashion shows are in full swing, I am thinking of what clothes I can give away. Only in Paris is there not enough space to have all of one’s wardrobe hanging in the closet. Only in Paris is there such a shortage of space that everything to do with one season is put away while the other goes on outside in the streets. And now that I have been here for a number of Octobers, I know that the trick to being Parisian is to cram the “mi-saison” clothes into the wardrobe together with the winter coats and cardigans:  This will then retard the moment when the winter clothes need to go away and the summer taken out of mothballs. October in Paris begins with “Nuit Blanche.” Eager to see and to know the city in all its many forms and colors, despite the fact that I was tired and wanted to go home, an American friend managed to drag me through the Marais to see start discovering the all-night excitement at around midnight, and as I rode home around 3am, I was glad she did. I never get the sense that the art, mostly in the form of second-rate video installations by unknown artists is the motivation for walking the streets of Paris way into the wee hours on the first Saturday night in October. Rather, there were other things to love and to revel in on Nuit blanche, one of the few nights in the year when Paris is open 24 hours. As we wandered among the hoards of people, young and old, for the most part quietly gathering, walking, waiting and watching, I couldn’t help thinking how Parisian the whole affair was. Unlike other cities I could imagine staging such an event, only in Paris could public art works bring crowds into the streets. I kept thinking of the Londoners, drunk, loud, maybe vomiting on the street, staggering around and needing more drinks as their motivation to stay up all night. There would be shouting, anger and all that repressed British emotion spilling out where it should not, on the streets of their city. And when I think of New York on such occasions, I imagine people trying to sell things, to capitalize on the crowds, the chance to make a buck. But in Paris, everyone was contained, quietly, patiently waiting in lines, wandering, talking and just enjoying their city and each other. In Paris, the “esprit de culture” and the “culture d’esprit” are the only motivation needed to spend time with friends in October. And it is often at these times, times to celebrate, times to appreciate culture and art, times to open my eyes wider, that I most feel at home in Paris.
This, together with the fact that many of the installations are in places otherwise forbidden to the likes of me and all the others in line on Nuit Blanche. This is our chance to see behind the locked gates and to walk through the secret gardens of the city’s hidden courtyards. I have no history in Paris, no old school friends, or long lost acquaintances to offer me a glimpse of other walks of life, here the wealth, the style, the sophistication behind the stone walls and 14th century gates of the Marais. October brings an open invitation to do just that. It is also the last month for walking, for watching each other, for sauntering, activities Parisians love to pursue. Because in November, the cold will set in, and the slithers of sunlight on the terraces that make sitting in the sun as we watch the proud Parisians parade before us, are not strong enough, or or do not last long enough to make being outside an option. Nuit Blanche was one of the last balmy Parisian nights of the season.
In October, I remember why I love to be in Paris more than any other city. As I set about my routine, and they theirs, I start to feel a sense of belonging. I know their routines, their behaviour, am familiar with their likes and dislikes, even if they are not mine. I know I am not French when the men in the street notice me, and as is their particularly Parisian habit, they let me know as much. If I were a French woman I would ignore the men, their eye contact, their flirtations, their street seductions. But I am not French, and everytime, I acknowledge their overtures in some way, even if to convey my disinterest in them. My response of anything other than a stock cold indifference codes me as a foreigner, everytime. It’s what we do, as opposed to what they do. And so in October, even as I enjoy the vicarious joys of the Parisian, even as the days get shorter and the cold approaches, even as I get caught up in the rhythm of a daily life which is not always so different from theirs, I am always reminded that I am not one of "them" and oh, what a relief that is!
Posted by Frances Guerin at 5:44 PM

Email ThisBlogThis!Share to TwitterShare to FacebookShare to Pinterest
Labels: Paris