It’s hard to know where and how to begin to write about the films of Béla Tarr because they carry within them a profundity that defies their rearticulation in any medium but their own. These are among the most cinematic films of our time. Béla Tarr makes films that watch people. That’s it. He’s not interested in all of the theoretical assumptions, the complicated “-isms” of discursive interpretations. He’s interested in watching people and the relations between them develop across time, a time that is alone in its creation of coherence across the narrative of Tarr’s films.
The other night I saw Tarr’s third film made at age 24, Panelkapcsolat, translated on the film print as The Prefab People but given the French translation Rapports Préfabriqués , we can assume that the translation is up for grabs. Whatever the title of the film, the intent is very clear: to watch the lives of a working class couple in Cold War Hungary as their marriage deteriorates. Although the narrative is elliptical in structure, the relationship is headed in a linear direction: separation. The man, Férj, is unable to communicate his emotions, or perhaps it is that he is unable to deal with the growing responsibility of the relationship, and so he spends more time with his friends, and drinks too much when at home, and just wants to be left alone. The woman, Feleség, at home with two small children is frustrated and, as so often happens, becomes demanding and, thanks to her own inability to communicate, hysterical. The more she wants him to stay, the more he wants to walk out the door. He thinks that buying a new car will make them happy, she thinks him being at home will do the trick. When he finally walks out the door at the end of the film, resisting the pull of the woman’s protestations, leaving her with the kids and the responsibility of daily life, we heave a sigh of relief. Thank goodness the tension and impasse of this dysfunctional marriage has ended.
Throughout the film, the camera is as intimate without being invasive as the insight we get into the couple’s relationship. Handheld long takes, even though not necessarily in closeup, the camera frames, reframes and shifts in order to get a better view, a more painful view of the given altercation, usually at home as the husband opens another beer, the kids start screaming, and the women starts to cry. It’s the intimacy of the camera that both takes us inside the relationship as well as makes it unbearable to be there. And of course, while this might be a very astute observation of the frustrations of Hungarian socialism, the collective misery of the post-Soviet life, it’s also as accurate a picture of the modern condition more general as we have seen in the last 100 years. The daily life of the couple on film in 1982 perfectly describes that of couples the world over today. That’s what makes The Prefab People even more disturbing. 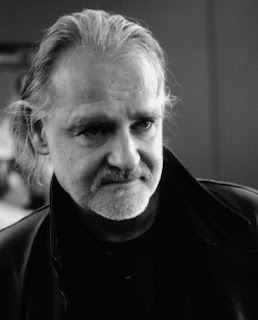 In the Q & A after the film, listening to Béla Tarr was like watching another of his films. His answers were generous, poetic and always sympathetic to the not so interesting questions of the enthusiastic and adoring audience. The inevitable question about the politics of The Prefab People was raised early on. And he very purposefully claimed that the goal of this film is "to find a universe in the couple and the relationship between them." That he does. He also reiterated in so many different ways, his lifelong commitment to realism. He said that his films explore "the space of the everyday and the place where it is no longer possible to fall into the illusion." Alternatively, he reflected on the need to discover "the authenticity of the emotions found by looking in the eye of the actor." Or, thanks to "the loss of illusions that happens across the lifetime ... you lose false hope."
But perhaps what remains most unique about Tarr's films is their refusal to judge what his camera finds in the eye of the actor. There is never any criticism, either of the characters, their world, the social forces that make them. Even in his bleakest of films, everything is as it is, with characters such as the couple in The Prefab People neither pitied nor criticized. The only judgment was mine, a judgment that took the form of incredible relief when the man shut the door on the woman. In a statement that underlines this baring of the truth irrespective of my wont to reject it, asked the difference between his films and Tarkovsky's, Béla Tarr responded: "Tarkovsky believes in God, and in his films when it rains it cleans the people. In my films, the rain creates mud."