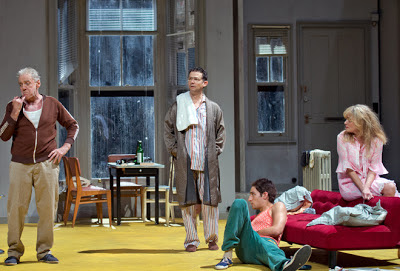 I couldn’t wait to see Luc Bondy’s staging of Harold Pinter’s 1965 Homecoming/Le Retour, even though it was in French. The reviews in both the French and British press have applauded the apparently “fresh” rendition. Though I am always reluctant to see translations of English language plays, the all star cast of Bruno Ganz, Louis Garrel, Emmanuelle Seigner and Micha Lescot, together with the rave reviews convinced me Le Retour was not to be missed.

Perhaps my expectations were too high, but I was very underwhelmed by this staging of Pinter’s otherwise tense and caustic, family working-class British drama. From where I was sitting, the play didn’t translate well into French, literally. The French language, beautiful as it is, mirrors the abstraction of philosophical discourse. And so, the concrete realism of Pinter’s language, of working class British language and life was nowhere to be found in this version of Le Retour. As I understand it, for Pinter, it is not only the language itself that communicates, but the nuances, the double meanings, what lies behind the words but is nevertheless left unsaid. He relies on these layers of language for the creation of meaning. Again, this level of communication was lost to the French. 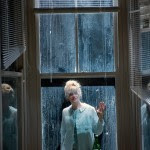 I was also disappointed by the casting, if not by the acting. All but Micha Lescot seemed like odd choices. Bruno Ganz, who I can’t help seeing, always, through the lens of his most informative performance as Kaspar Hauser in Herzog’s film, The Enigma of Kaspar Hauser (1974), was wonderful, but nevertheless, an odd choice to play Max. Ganz virtually redefined the characteristics of gentleness, naivety and vulnerability as the young man who appeared to the world having been kept in a dungeon for all of his life, in Herzog's film. Of course, he is more recently known for his performance of Hitler in Der Untergang  (2004) in which he masterfully plays the ailing dictator. However, on stage in Le Retour, it seemed that Ganz did not have the presence or the command demanded by the character of Max, the violent, angry patriarch. Such a figure, I imagine, would create a sense of fear and anxiety in the air that surrounds him. But Bruno Ganz is mild, and still somewhat gentle as an actor: he did not convince me that his physical presence was in any way threatening. Indeed, none of his sons reflected a sense of their fear of him. 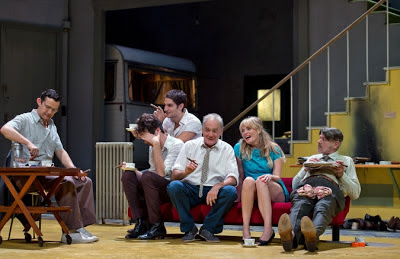 Similarly Emmanuelle Seigner was “too French” in her performance of the provocative, restless and seductive Ruth. Seigner was anything but the working class Brit with her coy, playful sexual teasing. As the character who apparently provides the glue that holds the play together, who comes to symbolize the tensions, fears, frustrations and secret desires of the family of men, Seigner was less than convincing. Like the other relationships in this version of the play, her seduction of the men, her games and desires, were somehow not credible, coming out of nowhere, conveyed with a one-dimensionality. Like the relationship between Max and his sons, there was no tension between Seigner and the other characters.

Again, I wonder if this was not helped because the drama of Pinter’s language could not be left unsaid, unfelt, unheard, in French. To give just one example, although we know why Teddy left home in the first place, all of the repressed trauma, the enigma, the implications of violence, are never felt in the way that the characters relate to each other now. John Lahr writes in The New Yorker:

"'The Homecoming' changed my life. Before the play, I thought words were just vessels of meaning; after it, I saw them as weapons of defense. Before, I thought theatre was about the spoken; after, I understood the eloquence of the unspoken. The position of a chair, the length of a pause, the choice of a gesture, I realized, could convey volumes."

What changed Lahr’s life is, of course, what was missing from Luc Bondy’s production. 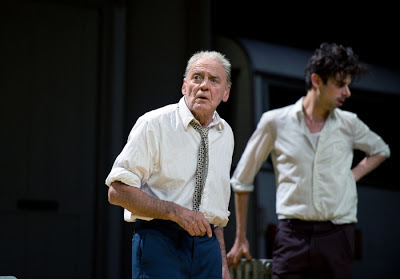 The one thing I really loved about Bondy’s version of Le Retour was the set, with its signature missing wall. The use of the window in the middle of the set, at the back of the stage, was superb. The characters appear and disappear like ghosts behind the dirty window that is meant to connect the interior of the home to the world outside. But it never does. The characters are always like apparitions as they stand looking inside. And then when on the inside, their images become reflected in the window, making them no more than images who have no power to assert their identity. 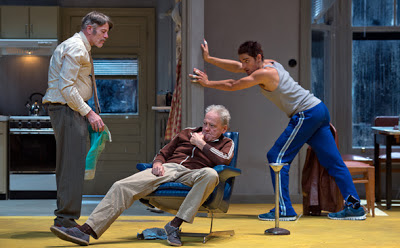 Ultimately, though, this is a play of excruciatingly painful realizations and unrealized desires. Neither the staging of Le Retour, the casting, nor the language of translation can communicate the nuances of the social world in which such dramas take place. And so when the French audience laughed at the most poignant and violent moments, I was convinced that it’s still best to see English theatre in its own language.