"If I don't paint this story, some whitefella might come and steal my country" Charlie Wartuma, Tjungurrayi, 1987

It was a somewhat surreal experience to walk around the basement of Jean Nouvel’s Musée du Quai Branly in Paris, visiting an exhibition of Aboriginal Art with my New York and Parisian friends. I grew up with aboriginal art and culture, my father worked with the aborigines, my uncle wrote a book on the bark paintings, so to see these images in this architecturally stunning Paris museum felt like entering a timewarp. Added to the strangeness of the experience was the identity my two friends. As we walked around, they asked questions that I couldn’t imagine anyone would not know the answer to: “what’s a bandicoot?” “what does that mean, the dreamtime?” “how did the aborigines greet the white colonizers?” “In what parts of Australia do the aborigines live?” “How many still survive?” It was a rare opportunity to experience my Australian identity in my adopted home. I was being asked to introduce my already international friends to the peoples and customs of my own ancient land.


Overall, as an exhibition, I thought The Sources of Aborigine Painting was wonderful. The works were well hung, and mostly, I appreciated that the exhibition focused on works from 1970s with some even earlier, turn of the century examples of ritual painting on objects. The works in the collection at the Musée du Quai Branly are very much contemporary examples from the better known, commercially motivated, art world, painted on canvas with acrylics. By contrast, the bulk of the current exhibition shows works made on masonite board in the 1970s by the Papunya Tula artists. The paintings are mostly made with acrylics of course because they are cheap, but the surfaces are nevertheless compelling. They are not varnished, left quite rough, and yet they have a shimmer that comes out of the tonality, the texture of the paint, the intensity of the dotting, the clarity of the line. In the end though, in spite of the West’s co-optation of aboriginal painting, these works are about representing and realizing the dreaming well before they are concerned with the aesthetic.
I was also struck by the detail in the paintings, the intense concentration required to paint them. But ultimately, what struck me most was that as western viewers we are left to look at them as abstract art. In their representation of the dreaming, these images are deeply narrative, the paintings are themselves a form of mythmaking, the artists are visual storytellers. Even though the exhibition included a lot of text, these are paintings that require full translation before we can begin to access them.  Otherwise, we are left to look at them as pure aesthetic objects and to ignore the narratives they tell. I grew up with paintings like these, everywhere, I can read most of the iconography, but that’s like being able to recognize the letters of the Cyrillic alphabet. It gets me no closer to understanding the Russian. Given that we don’t fully understand them, I can see why these aesthetic wonders of abstract art would be so attractive to the high modernists. They challenge or extend so many of the givens of painting. For example, the images are made to represent the view from above, perpendicular to the earth. The Dreaming, or ancient lore, is traced through songs, dances, stories, and when it is visualized it is done so on, in and through the land. The aborigines see and know the world from a wholly different perspective, in a wholly different way. There is no horizon, no distinction between the infinity of nature and the finitude of human life, there is no horizontal and vertical, no distinction between sky and earth, between the physical and the spiritual worlds. All of these limits that are nowhere to be found in the aboriginal paintings are, of course, the fallout of our post-Enlightenment attempts to rationalize and order the world with ourselves at its centre. So if the modernists strived to see and know the world outside of Western eyes, it’s not difficult to imagine why they would have loved Aboriginal art.
I came away with many questions, and wanting to know more than the exhibition was telling me. I want to know what happened to all this art when it was made. While the provenance was on the title cards – in private collections in New York, the National Gallery in Canberra, and so on, I don’t believe that private collectors would have bought it when it was made in the 1970s. While provenance is not usually something that we are told in an exhibition, it would seem important here given the history of aboriginal art and its exploitation by the West for the purposes of a market economy. Similarly, together with my New York and Paris friends, we wondered why there were no women painting, or at least none represented. 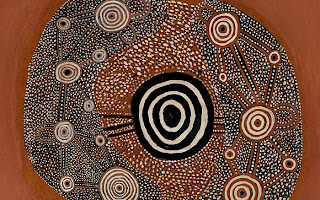 That said, I learnt new things from the rich experience of aboriginal art offered by this wonderful exhibition. I had never noticed how these images produce optical illusions: the result of some of them with their dots and waterholes, lines and rivers is a resemblance to various strands of 1960s op art. Others were quite magical in the illusions produced through our movement: in closeup and from a distance they were completely different paintings. Similarly, when seen from different angles, the same paintings become very different again.

And for me, what I learnt —surprisingly because I always like to think I know so much about America— were the numerous similarities between the culture of the American Indians and that of the aborigines. Their history is of course similar, but what I didn’t know until I went through an exhibition with my friend Dawn from new York, was the deep spiritual connection had by the American Indians to their land. Like the aborigines, American Indians are people governed by their spiritual beliefs, that are, in turn, fashioned by nature, not totemic Gods. As we see in these paintings, that spirit, or the Dreaming, is in the land, the animals, plants, earth, sky, moon, the natural seasons, and of course, other people. As wonderful as The Sources of Aborigine Painting is, I couldn’t help feeling a deep sadness that so much of the richness of this world — and of course that of the American Indians — has been lost. This made the exhibition even more powerful.

Dear Frances, Love your questions, true, more to be revealed. A great show, good to read what you have to say about this particular topic.