I was surprised at how much I had forgotten about life in Berlin, but like getting back on a bike, it didn’t take long to be plunged back into the cultural familiarity of this extraordinary city. I recently read Thomas Bernhard’s Old Masters as well as Asunder, by a young writer, Chloe Aridjis, both of which give life and personality to the otherwise “invisible” museum guards in the Kunsthistorisches Museum and the National Gallery in London respectively. With these two novels on my mind I was alert to the comportment of the museum guards and it didn’t take long to be reminded of this unique human specimen: the Berlin museum guard. 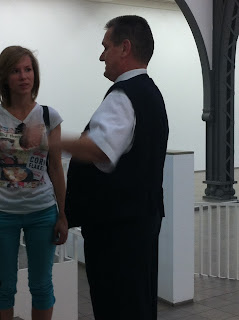 All of the guards in galleries on Museum Island were just as I had remembered them when I visited Berlin during the Cold War: upright, proud civil servants with a sense of propriety over the goods in their charge. The one difference — and it is a significant difference — is that their uniforms have been updated to reflect the striking renovations of the rooms they inhabit. 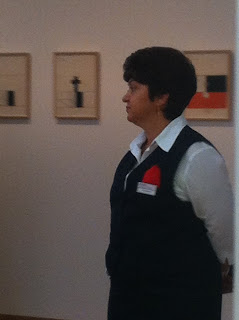 I was struck by the fact that at the Hamburger Bahnhof where the contemporary art sometimes resembles objects from a waste bin, the guards were fierce. The manner in which they instructed visitors to put their bags in the cloakroom, the unflinching authority with which they refused a group of French tourists entry one minute after the said last entry, the fierceness of their look as they guarded the ephemera of Joseph Beuys — bits and pieces he sometimes picked up from the side of the street — and their policing of photographs of works that couldn’t possibly reproduce on an iphone, made it seem to me that they had been trained in a simulated environment and were unable to translate their skills to behavior more appropriate to the art that surrounded them. Their rigidity and officiousness would have been comical if it wasn’t so confrontational. 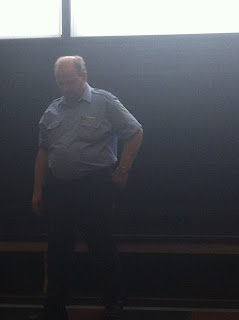 At the Alte Nationalgalerie by contrast, where the paintings are among the most glorious in Berlin, indeed, in all of Germany, where whole rooms glow thanks to the luminescence of Casper David Friedrich’s landscapes, the exquisite and delicate brushstrokes of Schinkel’s cathedrals and Böcklin’s lighted skies, the guards were far fewer in number and tenfold more generous and friendly. It was as though the treasures of German art history lightened their spirits. We watched as five guards rallied around a young boy with his leg in a plaster cast in a wheelchair to place a ramp over three or four stairs to a mezzanine level. It was quite a performance, but the guards jovially took a break from reading their iphones and made it happen. Children were at the museum with their parents on an otherwise glorious summer day, looking at the history of their nation’s art. On more than one occasion I saw the guards engaging the children in discussion about the art on the walls, proud of their familiarity with images that accompany them day after day at work.

It was as though the delicacy and softness of German art had resonated with their being. We don’t expect German art to be so gentle, and neither did I expect the guards to engage so generously with the children in their midst, especially when at one of Berlin’s oldest, most esteemed institutions. 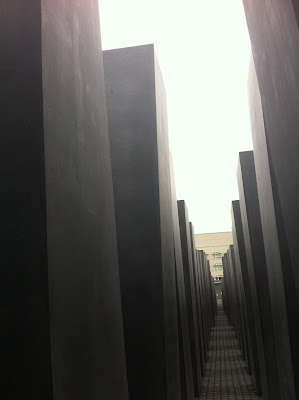 More like the Hamburger Bahnhof than the Alte Nationalgalerie were the cries of the guards at the Memorial to the Murdered Jews of Europe. One of the most delightful, and simultaneously, unsettling expanses of the new Berlin is the 19,000m2 field covered by Peter Eisenman’s concrete slabs at Potsdamer Platz. As visitors wander through this cemetery, children and young people race along the narrow pathways, hiding from each other around corners, climbing onto the stelae, laughing and screaming as they outwit their friends. Because of the height of each stela our sightline is limited to what is in front and behind, we cannot see to the left or the right, and so we put one foot in front of the other with trepidation, timidly advancing, eager to keep moving. The light pouring onto our path is eerie, compromised by the colour and density of the slabs. Young people sat on the columns, talking, kissing, quietly reflecting on the experience of being at the Memorial, or simply of being together. And then came the guards in their official uniforms, complete with hats and ties: literally yelling at the top of their voices, ordering people to get down, to stop running, to obey orders. 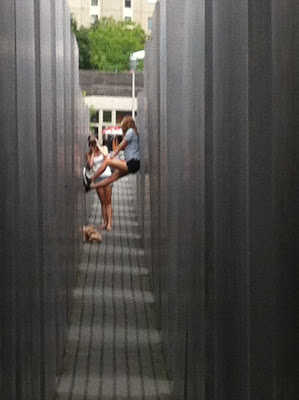 I couldn't help wondering whether the German guards were protecting a historical treasure or extending a legacy as they constantly ordered these young people into line at the Memorial to the Murdered Jews of Europe?
Posted by Frances Guerin at 11:57 PM