At the Monnaie de Paris, where they still make the coins in circulation today, on exhibition is one of those very rare bodies of work that moves across different audiences so convincingly that it seems incredible. Maurizio Cattelan: Not Afraid of Love was enchanting to children and horrifying to adults in equal measures. Actually, adults moved from curiosity through to revulsion and horror in a very short space of time, while children seemed to approach the works with caution and ease into fascination. Perhaps the best illustration of this comes in our approach to a wax figure of a young boy, kneeling in prayer with his back to us. He is a little inside the doorway of an ante-room in the residential palace. I was intrigued by this figure in the doorway who was surrounded by adults looking down, as if in conversation with him. Their expressions told nothing of the identity of the figure that would only be revealed on seeing his face. Adolf Hitler. And then, face to face, with Him (2001), Hitler in a posture of humility and vulnerability, we remain interested and accepting. Then as we process the irony of our condescension towards the great 20th century tyrant, we begin to feel intense discomfort. Rather than feeling deceived, I was horrified at my own attitude of tenderness towards the small kneeling figure. 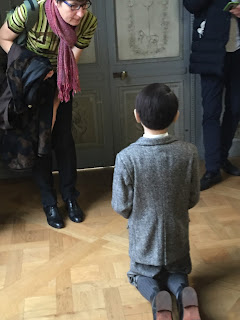 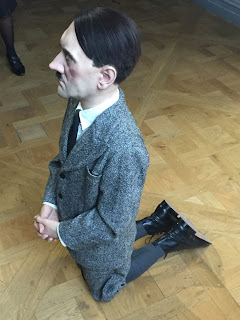 Another piece that I found very disturbing, one that charmed the many children in the salons the day I visited was Untitled (2007). A horse with no head is leaping through, charging at, or slammed against a wall, depending on how we look at it. How we  perceive the piece will also determine our understanding of the absence of a head: is it already on the other side of the wall, chopped off by its own reckless jumping, or whether was it beheaded by a now absent villain? 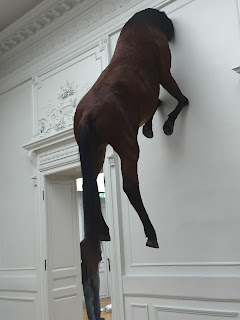 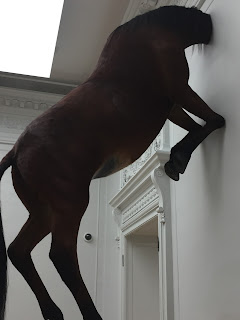 It’s not just with a play on perspective and a command to look closely that Cattelan challenges his audience. The significance of the figures and objects he chooses (often himself) is also imbued with politics and history. The horse featured more than once—the other was hung from the splendorous entrance to the palace. The horse is of course the symbol of power and privilege of all kinds. Indeed, the taxidermied horses that Cattelan uses evoke all of the power and force of the most regal of animals. But like Hitler, they are beheaded, lynched, made vulnerable and ineffective. And moreover as much as he makes it his business to disempower the powerful, he is engaged in an empowerment of those with nothing. In one small room, again, an ante-chamber, a figure that resembles the homeless on the streets outside, sits covered under a blanket to hide its identity, or perhaps to keep warm. There is no way to see his face, and indeed, perhaps there is no figure inside the blanket. This would make it even more stirring if a blanket covering an absent figure had taken up residence in this palatial 18th century building overlooking the Seine.

Mention must be made of the diminutive size of the figures of Cattelan himself scattered throughout the exhibition. In case we forgot who was in charge, these figures were everywhere: high above on a shelf surrounded by pigeons watching us below, hung up on the wall by a hook, clearly having been placed there by a gangster, in another room he was in bed with his double, and from behind he might even have been mistaken for Hitler. And yet, he may have been everywhere but Cattelan was always in miniature, revoking his power as the authority of this exhibition. As artist, he was both omniscient and always in the process of disappearing, in the most unique of ways.


I enjoyed the exhibition and found Cattelan’s use of the space and significance of Monnaie de Paris to be thoughtful. Similarly, I loved that children were entertained and their parents challenged by the very same works. I also appreciated that each work was given its own room, so that it created an environment and was then able to be created by the audience that surrounded it. However, I have to say, as I wandered around, I was continually reminded of the work of Juan Muñoz, the great Spanish sculptor whose diminutive figures of paper maché, resin and bronze, always moving, always in conversation, always provocative and disturbing by comparison rob Cattelan’s figures of their complexity.

Posted by Frances Guerin at 7:10 PM