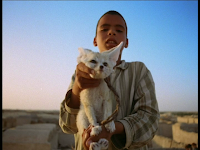 I am not sure why I have never seen this film, but what a treat. It must be the first, or among the first, of Herzog's sci-fi "camera in a love affair with a landscape" films. It's a genre which, for me, finds its most extraordinary articulations in *Lessons of Darkness*, Herzog's 1992 ode to the Gulf War. In *Lessons of Darkness*, the camera lands on this planet of burning oil wells, scouring the charred, scarred and devastated landscape in search of life and an answer to what inconceivable nightmare has taken place here - on this "planet" far from the reality we know. *Fata Morgana* doesn't have the polemical power of *Lessons of Darkness*, but it is classic Herzog serenade with a landscape, and a mythic tale of creation and flight into paradise. And like the spoiled oil fields on fire in post-war Iraq, filmed in the desert of Cameroon, Herzog's camera is again like a visitor to an unknown land, keenly watching, looking for and following it does not always know what. Every now and then, the camera comes across the out of place spoils of colonialism: such as dead animals and scrap metal from an airplane. The remnants of other intruders are so out of kilter with the awe inspiring landscape that one cannot help but scorn at whoever passed through before Herzog's camera.

There is one delightful moment where two men in extreme long shot beckon the camera to move to the right and into the distance behind them. When it disobediently stays where it is, one of the men runs away as if to pull it in his direction. But the camera stays put, and it is only when the second man guides it towards the horizon of wasteland by running out of the frame that it follows it. Such wonderful moments remind us that the camera is never at one in a seamless continuum with what it films, that ultimately, it never really intrudes into the space of the local people it meets. It never "sees" in the way an anthropological film might otherwise claim, preferring to remain on the outside.

The theme of blindness also runs throughout Herzog's oeuvre and finds its forte in *Land of Silence and Darkness* (a film about a community of blind, deaf and dumb people who communicate and express themselves emotionally through touch and their own impalpable language). *Fata Morgana* explores the blindness of the camera primarily through its constant use of tracking shots, varied only by the speed of the vehicle from which they are taken. As it races across the seemingly sparse, but always infinitely rich and fascinating landscape, sometimes it misses the activities or collectives of human figures. At other times, for example, when it stops to stare from above at a township of mud huts there is nothing to see but an abstract collection of shapes. Alternatively, the camera happens upon a human figure engaged in an activity such as the boy with the small white animal. It's unclear if the boy is posing for the camera or if the camera is watching the boy, the two become so locked in each other's gaze that it no longer becomes relevant. The point is, neither really seems to understand the behavior of the other.

While the voiceover by Lotte Eisner is poetic and Romantic in the aestheyic sense, in another typical Herzog technique, the music at times overwhelms the visuals. Here, the ballads of Leonard Cohen, and Mozart symphonies are so moving that they have the tendency to transport us to a dream world that leaves the wind sculpted dunes behind. The images of these Herzog films are so mesmerizing and transforming of our mundane, everyday thoughts, that they don't need the sound track to do that for us. Or maybe that is the point? But this is one of the treats of *Fata Morgana* in that it's like looking at an early Picasso: in it we can see the master at work, without the splendour and polish of the well-known works. That said, there is an immediacy and a roughness to the visuals of Fata Morgana that makes it clean and compelling in a way that gets lost in the magnum opuses of years to come.

Now that the Herzog retrospective is well underway at the Pompidou Center, it's worth doing battle for tickets with all the other Herzog hungry Parisian because some of these films won't be screened again, if ever, for a long time.
Posted by Frances Guerin at 11:44 PM