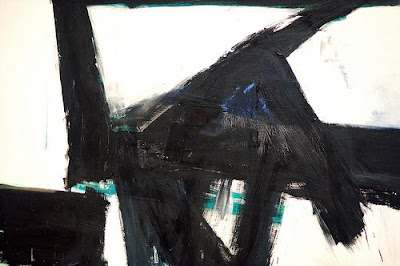 I went to San Francisco MoMA yesterday on a mission to see Jasper Johns' Land's End, and as so often happens I got waylaid. Two rooms before the samples of so-called Abstract Expressionist and Pop Art sits this powerful late painting by Franz Kline said to represent the trestles of the Central Railroad Bridge in his home town of Leighton, Pennsylvania.

I am not so sure about the representation in this painting: I don’t see trestles and valleys and bridges and railroads. What I see is an extremely aggressive energy motivating the application of black and white paint to a canvas. It’s true that this energy is the product of industrialization — the geometricality of the black brushstroke, the highly defined lines, and the thickness and tactility of paint that, in places, has the appearance of being applied with anger all come together to represent a world in which the noise of machines deafens, it overwhelms the dreams and pleasures of life.

However, Lehigh V Span runs deeper than this. There is a tension between the definite, linear organization, the carefully planned or rationalized in the painting and the sense of impulse and spontaneity in the forceful, passionate brushstrokes. The same kind of tensions are everywhere present here, because as much as it is dynamic and aggressive, the painting is surrounded by a peace and serenity in its quiet attempt to catch the echo of the industrial din with which it is fused. These tensions are underlined by its placement next to a Rothko (Untitled, No. 14, 1960). While we characteristically want to fall into the luminous and tender world of Rothko’s orange, brown and purple composition, Kline’s becomes even angrier and more determined by comparison. Which is not to say that Rothko’s canvas is without tension, but it is of a different order to those of Kline’s Lehigh V Span. 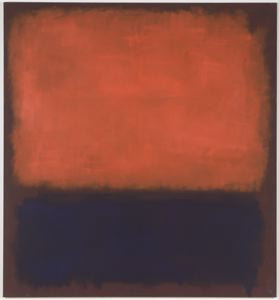 In my mind, Kline's work is always and only ever black and white. I remember the Whitney Museum's exhibition of his work in 1995, and as its title indicated (Black and White 1950-1961) there was no color. And so for me, it was impossible to walk past Lehigh V Span without being caught by the drama and beauty of the blue and green that simultaneously merge with and are erased by both white and black on this canvas. In ways other than the obvious, the green and blue carry the painting way beyond its mere confrontation of black and white. They give the painting a sense of watching Kline’s mind at work – there are times when the colors are quite worked over (by both black and white) and others when it is as though he no longer has the energy to overpaint, and so he leaves blue and green to speak for themselves. Perhaps the presence of color also contributes to the harmony and peace this painting exudes.

Kline's is a practice of painting that is deeply American, deeply masculine and despite its loudness and aggression, deeply moving.
Posted by Frances Guerin at 6:31 AM