Shibuya: At the Center of the World

Many times I have seen the pedestrian crossing, and felt its energy in movies and music videos. But it's like the rest of this city - being in the middle of Hachiko is like nothing else I have ever experienced. The hoards of people are inconceiveable, the density of the people traffic so inspiring that it felt like I had been on a lifelong pilgrimage to be there, only I didn't know it till I got there. After one week, I think I am getting used to being in Tokyo, but still, the same things never cease to amaze me. And in Hachiko I am still astounded by the ease and comfort of being in the midst of these teaming crowds as they pour onto the pedestrian crossing in front of Shibuya train station. No one pushes, no one is in such a hurry that they need to be frustrated by my pace. I am slowed down by awe at the magnificence of the neon clad buildings, deafened by the noise of nightclubs, some kind of political speeches over loudspeakers, and wanting to absorb the thrill of being at what feels like the center of the world. And the Japanese remain as courteous and pleasant as ever, minding their own business, but when asked, ever ready to assist with my most inane enquiries. It is really the greatest privilege to be immersed in this civilized world - sorry G.W. you have no idea what that word means. 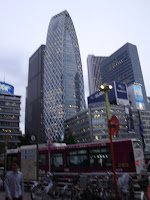 Today, for the first time I got lost, though it is a wonder it hasn't happened earlier. I went to visit a friend of a friend who lives in a building by the tracks of Shinjuku station. Always eager to be above ground, I made the fatal mistake of leaving the train station a few exists too early. Naoko had given me a map and very clear directions on how to find her building, but I learnt today that this system of locating an address is still liable to baffle me. Nevertheless, I was only five minutes late because I asked at a store and with the courtesy and respect I have now come
to expect, the lady telephoned Naoko, got the directions, and escorted me to the end of the street and pointed in the right direction - and we wonder why the Japanese think the French are rude!

Fumbling with the street map, negotiating exits from a train station, looking for a building that sits next to a big hotel, making sure to keep the train tracks on the right (even though it is not always above ground), I realized that, once again, this is a culture in which imag 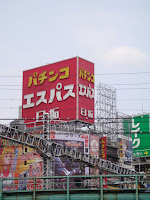 es make more sense than words. Space, movement through space, conceptions of space, direction, physical orientation and location are all conceived visually - just like the language. See My Day in Asakusa. The experience of looking for a building that has a number, but a number not displayed, on a street with no name, in a neighborhood divided into 15 sections means that I am always looking at and for where I am going. In anticipation of my arrival, I envisage or imagine myself in that space, I don't see it as the goal at the end of a journey. And when I get there, I see it and am in the space, rather than thinking or knowing I have arrived.

This said, if I am honest, I am way too Western to believe that I have adapted to the Japanese experience of space and their city. Later this afternoon, as I sat, immersed in the enthrall of being in the futuristic bubble of Shibuya's dazzling facades, I felt as though I was at the center of the world. I had arrived. I was at a place that is an end of a journey, a place from where every other pedestrian crossing must now forever pale in comparison. 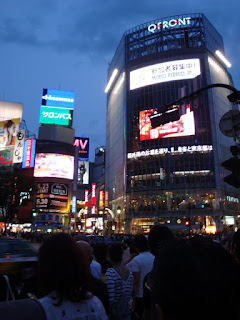 Posted by Frances Guerin at 5:02 PM

Email ThisBlogThis!Share to TwitterShare to FacebookShare to Pinterest
Labels: Tokyo