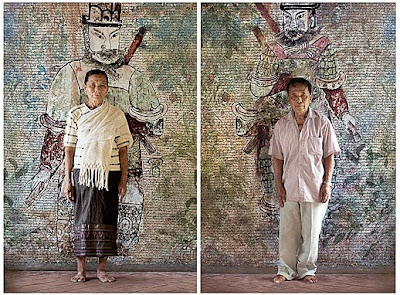 My two cultural outings last Friday were, to say the least, uncomfortable bedfellows. I knew this in advance, but it wasn’t until 1am this morning when I arrived home after a four hour performance of Shakespeare’s Julius Ceasar that I realized just how impoverished some forms of contemporary culture can be.

I have never been a fan of Shirin Neshat’s work: she is one of those artists that I think is very overrated, someone who exploits her Iranian background to win the attention of those who matter in the art world. She is, afterall, an upper-middle class, Berkeley educated woman living in New York City who makes images about female oppression in the Islamic world, claiming legitimacy on the basis of her Iranian roots. Why then, do I keep going back to see her work? Because I keep thinking, well maybe there is something to these video installations, typically bifurcated visions of Muslim gender divisions on two screens simultaneously, that I am just not getting. Alas, Games of Desire at Galerie Jerome de Noirmont on Avenue Matignon failed to convince me of any failing on my part to be wise to the supposed profundity of Neshat’s work. The dozen photographs on the ground floor, all of a single Laotian in front of a ritual drawing are pretty, but it is the video upstairs that is the centerpiece of the exhibition. I had barely got through the gallery door before the man told me the video was upstairs.

The 22 minute video was filmed in Luang Prabang in Laos in 2005 and 2008. The two-channel video is shown on two screens, one at either end of the gallery: on the right we see 60-80 year men singing passionate love songs, and on the left, women of the same age do the same. The Laotian men sit on mats cross-legged, chanting and singing with glee as if to schoolgirls, wooing them with phrases that seem strange given the reality of the women opposite them, at the other end of the room. In a group, and then one by one, framed individually, they sing of the “round faced girl” while the women respond by singing of the men’s white teeth and red lips. Clearly, the lined, yet joyful, faces, mouths filled with rotten teeth on the opposite wall do not marry with the young lovers we imagine to be the recipient of such flattery.

Ultimately, however, I remain unconvinced of the great insights about this Eastern culture that Shirin Neshat apparently brings to the West. There is a border between men and women, yes, but wasn't this the same message we were given in all Neshat's other work? I am only glad that I had Julius Ceasar to look forward to, and to give me something more worthy of my energy to think about over the weekend.

Stay tuned!
Posted by Frances Guerin at 12:05 AM