While Dean’s film installation is, as it’s subtitle claims, “a film with and about Merce Cunningham,” I also want to insist that it is a film with and about Tacita Dean. Filmed on location in the craneway of an abandoned Ford motor factory in San Fransisco bay, Dean’s realist film aesthetic is so perfectly suited to Cunningham’s choreographic minimalism. To give one example, if Cunningham’s life’s work results in a de-objectification of the human body of the dancer, then Dean’s observational practice echoes the anonymity and formal precedence over narrative development, thus desire, in film. In what must be one of the most articulate embodiments of the realist aesthetic in documentary film today, Dean’s long takes and long shots fuel a work that, over time, becomes transformed into a lyrical treatise on the ethereal elements of water, time, motion, light and space. Over the course of the 108 minutes of Craneway Event, Dean’s film and Cunningham’s dancers in motion in the breathtaking hangar structure thus become synergetically fused. 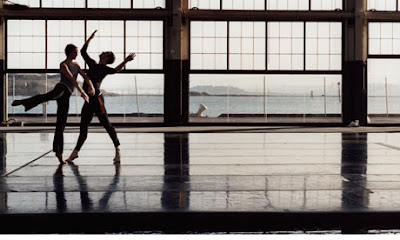 Despite my conviction that Dean’s film is about light, movement, the ethereality and anonymity of the human body in its interaction with the camera, I am prompted to consider what it says about Cunningham, the master choreographer because it was billed as a “portrait” of Cunningham when it screened at the Frith Street Gallery in London. There are some very poignant shots of Cunningham as he sits reflective, sometimes perhaps dozing in the afternoon warmth of the sun and light as they stream through the magnificent hangar space that is the setting of the rehearsals. Of course, we are mesmerized by his alertness at the age of 89, as he moves in a wheelchair that glides quietly like the sailboats that drift in the bay outside the windows. However, these shots say very little about Cunningham and everything about the inability of film to capture a person. Put another way, Cunningham’s image in this film becomes another element in the beauty and serenity of a world in quiet motion. He too is given the delicate insubstantiality of his dancers. Perhaps that is, in itself, the most profound claim about the work of the great master: his ability to choreograph a workplace so harmonious, fluid and ethereal that even his presence gives over to an otherworldliness in which the trials and tribulations of being human and living in the world no longer matter? And it is an otherworldliness that is so perfectly reflected in Dean’s aesthetic.

Lastly, I must say something about the carefully crafted soundtrack that completely undoes the lightness and liveness of the image track. My American friend thought that the near on two hours of Craneway Event would have been “easier” to watch with the John Cage music that usually accompanies Cunningham’s pieces. However, Dean’s decision to film the dancers in rehearsal is just the point. The exaggerated shuffle of feet, the thud of a dancer landing on stage, the creak of the floor, the dulcet tones of Cunningham’s voice as he communicates the transitions, directions and synchronization of the dance are exquisitely held by the silence that otherwise surrounds them. And because Dean manipulates the sounds, they interrupt the dreamlike image, with their matter-of-factness and, at times, raucous echoes through the huge open space. Ultimately, the sound prohibits us from falling headlong into the dreamworld of the stage, ensuring our attention to the reality of two hours of film.
Posted by Frances Guerin at 3:01 PM

You really make me want to see this -- sounds utterly breathtaking.