Eadweard Muybridge at the Tate Britain 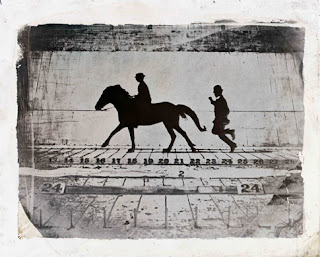 The most challenging aspect of teaching early photography is communicating to 18 year olds just how enthralling, even mesmerizing it was to its nineteenth century audiences. Coming away from the Tate Britain’s exhibition of Eadweard Muybridge’s photographic experiments, my resounding response was one of wonder at the beauty and magic of what I had just seen. Muybridge, the innovative, self-made man of modernity with a sensational biography is not the only draw card here, rather the Tate Britain presents his photographic treasures so that their innovation and aesthetic beauty is the great wonder of this exhibition. 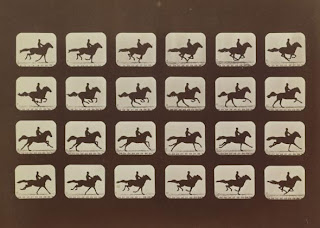 Most visitors will be familiar with Muybridge’s motion studies through stop motion photography, particularly the running horses and dogs. In these images Muybridge is the scientist who discovers that when four legged animals run, all four legs leave the ground at the same time. And in the photographic camera’s ability to see this observation unable to be made by the naked human eye, Muybridge becomes the physiologist who develops an understanding of perception. Muybridge’s contribution to a whole plethora of knowledge-fields does not stop there. At times he is the anthropologist, at times the medical researcher, and with his development of the photographic apparatus, an engineer. Even his photographs as images are always more complicated than what we think of as photographs today. In the images made for the zoopraxiscope for example – an alleged forerunner of the motion-picture camera – Muybridge hand paints the tints of each image. Similarly, the cameras, production and developing processes of his photographs evolve across the second half of the nineteenth century. This embrace of different media, different modes of experimentation, and the venture into so many different territories makes him an ideal candidate for the renaissance man of modernity.
Charles Darwent in The Independent claims that Muybridge's inventions were not as influential as is often claimed, that his apparatuses and production methods were never actually taken up at large. However, Darwent doesn't account for the fact that these technologies were developing at such a rapid pace in the late nineteenth-century, and that even if one replaced the other in quick succession, each invention was an indispensable step on the way towards the next. Thus, Muybridge's zoopraxiscope may not have become mass produced, but it was certainly a necessary step along the path towards the ever sophisticated machines we now know as the cinema. 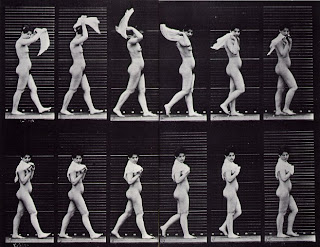 Darwent is also harsh on Muybridge's apparent fascination with the human form, and particularly his photographs of women and deformed men and children. What becomes obvious when seeing all of these works together is that, even in the series of photographs of men's bodies, and of course, the horses in motion, he is as much interested in form as he is in motion. The images of women walking, getting in and out of bed, going down stairs, all seem to be in keeping with Muybridge's fascination for the body. It is true that the images of women are less concerned with the scientific elements of the female form in motion, and more focussed on the curves seen from different angles. However, exploitation was not the first thing that came into my mind as I looked at images of women proudly parading for Muybridge's camera.
There is much more to say about an exhibition that was a rich and fascinating experience. The gorgeous and infinite variations of the motion studies could fill pages and pages. However, a brief word about the landscapes of the Yosemite Valley. When Muybridge first set out to California to photograph the Yosemite Valley, photography was one way, in fact for many it was the only way, of traveling. For this reason, just seeing the dramatic mountain formations would have been astonishing to many viewers at the time. Muybridge goes further though. Thanks to a combination of the cameras, the film material, the processing, the Yosemite appears like an abstract vision of rocks, trees, and when there is water, mirrored surfaces.
And in the case of the landscapes, so many of the images are split into two – mountains (the valley) distinguished from water, or both from the sky. And when the landscape itself is not split compositionally, his earliest photographic experiments often appear in twos. The notion of repetition and seriality, the dwarfing of human figures in these extraordinary landscapes, the objectification of nature in the pursuit of mechanical reproduction, rationalization, the visualization of never before seen perspectives, all of these concerns are the work of an innovator of modernity. In view of the inventions and explorations of Muybridge's camera, to bemoan the manipulation of reality by an artist with a big ego, seems to miss the point of these magical visions of old.
Cataglogue
Posted by Frances Guerin at 8:54 PM

Darwent has to get in a pretty long line (series?) to complain about Muybridge's "fascinations." One more reason to be tired of journalistic criticism: no end to its capacity to be born yesterday. More interesting to me was the two legged activity the show (at least in D.C.) inspires among its viewer: those incredible panoramas of San Francisco that require you to put yourself in motion around them. As opposed to the Yosemite image you cite here, which is one of the most stop-me-in-my-tracks photographs I have ever seen. I showed it to my history of documentary class as a way of talking about the idea of the moving image (even when the image does not, in the usual sense, move).

The SF panoramas were amazing, and for me, it wasn't just walking around the panorama, but I found myself leaning in and out. I kept wondering if I could find my friend Nina's house in Richmond Hill.

And I love how you used the panorama photographs in class - I had never seen them before....