Tonight, I went to see Mondrian and de Stijl at the Centre Pompidou, and I nearly cried. I didn’t particularly like the hanging of many of Mondrian’s greatest paintings that are on display here. Although this huge exhibition did, at times, gesture in the right direction, in true Centre Pompidou style, there was way too much going on, and to be seen properly it would need at least three full days. While I see the logic of bringing Mondrian and De Stijl together — more on that in the next blog entry — as an exhibition it was too big and too overwhelming. That said, being in the presence of Mondrian’s paintings reminds me of what joy it is to be alive.
In a room that was, for me, the centerpiece of the exhibition, a room filled with works from the 1920s and 1930s when one war had subsided, the other still to come, the paintings gradually enter into a world of their own, independent of any influence I may have over them. I last saw paintings such as the compositions in red yellow and blue in New York at MoMA in 1996. There and then, they were hung differently, in galleries that were not thoroughfares, but discreet spaces that invited the paintings to speak to each other. These masterpieces were exhibited slowly and silently, in chronological order, fully allowed to contradict and to enhance each other, to confuse us, to provoke us to marvel at their independence from anything we might think about them. At the Centre Pompidou this sense of community between the compositions is gestured towards, but not fully enabled. Still, we become confused by them, as we try to work out if the red square is bigger than the blue. Is the white between the black lines equal, which is the line and which the color, or is it, in the end, all an optical illusion? These games that the paintings as a community play with us are the great joy of letting go to the magic of Mondrian. It is then that we begin to feel the vibrations as they rub up against each other, constantly moving, changing and deceiving us as our vision is tested against the forms and surfaces of lines, the blocks of red, yellow and blue. This is what makes not only Mondrian's canvases, but the experience of painting life changing.
The excess of context for Mondrian’s greatness is reflected in the enormity of the exhibition at the Centre Pompidou. That this great master was not working in a void, but rather came at the end of a long line of Flemish masters, in a land filled with water, flatness and a natural world waiting to be echoed in painting. This is interesting, in and of itself, but I wonder if it is really what Mondrian has most to offer the world today? Is the intellectual, historical understanding of color on a canvas, ultimately, as interesting as the relationship we enter with them as we stand, among the paintings, listening with our eyes to their intensity? 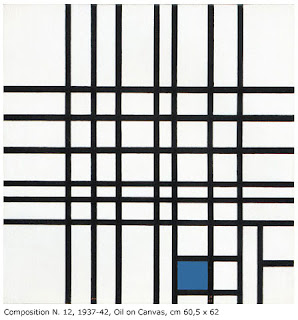 I was with friends who were unaccustomed to modern art. When I explained Mondrian’s preoccupation with the problem of painting, the revolution that he spearheaded in the attempt to break away from centuries of perspectival renderings as the great deception of painting, they said “uh ha.” And when I talked about his challenge to perception via a fusion of figure and ground, line and color, the space of representation and that beyond the frame, they seemed to be engaged. However, when I asked them to watch the surprises and unpredictable optical movements of the untitled compositions, asking them what they saw, over time, their faces lit up. It was in this gesture of measuring their own perception against the ingenuity of Mondrian’s compositions that my friends became really engaged. Indeed, they were fascinated, visibly animated by the magic of abstract painting as it came alive in a relationship they developed with what was, otherwise, paint on a canvas in a frame hung on a wall next to another image of paint on a canvas in a frame hung on a wall. And I ask myself, isn’t this what painting is all about? Isn’t this what Mondrian was looking for in the first place?

Posted by Frances Guerin at 4:40 PM