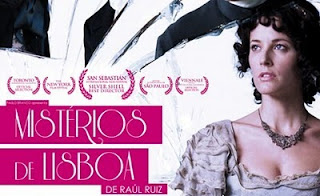 At four and a half hours, Ruiz’ version of Mysteries of Lisbon, an adaptation of Camilo Castelo Branco’s 1852 novel, might be called epic. But given that there are no heroes here, no heroic deeds or events, no masters, no grand historical claims, it doesn’t really sustain such an ordinary assignation. In fact, the film is constantly working against the possibility of grandeur or mastery, opting instead for a sprawling and undulating narrative filled with infinite twists and turns that makes it, ultimately, elusive. This is a film in which the conventions of story telling are used to do rail against the epic. The film opens with the story of a young, presumably orphaned boy in a monastery school being sketched by an Englishwoman. We never see her again, and the film never explains what she was doing sketching his portrait in the first place. She doesn’t, afterall, seem to be important, but her portrait of the boy is one of the handful of objects he holds onto throughout his life. He hangs it on the wall of every room he inhabits thereafter, irrespective of how long or short the stay. The boy also places a maquette of a theater given him by his mother, and a wooden ball given him by the priest who runs the boys’ school on the dresser of every room he occupies. These three objects are about all young Pedro, or João, as he is also known, and we alike, get to hold onto in a film that flows between past and present, between countries, epochs and generations, unpredictably. Voices, images, characters and places are fluid, and constantly changing through camerawork that equally often breaks the rules of continuity filmmaking. Throughout, Ruiz uses very conventional narrative, story telling strategies, but he confuses them through inventive camerawork that will be familiar to connoisseurs of his films. The flashback, for example, is abundant, but not signaled as such. Rather across edits the film moves with ease through times, spaces, character identities. The camera will track through 360 degrees and as the circle closes, the character seen at the beginning of the tracking shot will appear in a different costume, younger or older than originally. Or if a conventional flashback is signaled, for example through dialogue, the voice of the teller will change in the flashback, so it might in fact be someone else's memory, but we do not know whose. Alternatively, the character in the flashback looks so completely different that we do not immediately believe him to be the one speaking in voiceover narration. 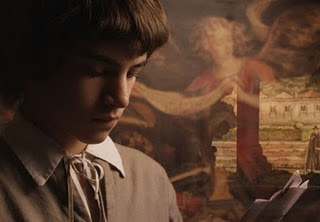 Like Three Crowns of a Sailor (1983), everyone in Mysteries of Lisbon has a story, and everyone must tell his or her story. But it is through listening to someone else's story, not telling his or her own, that each character will discover and define who he or she is. And this search for an identity is in the end, what the film is about. Everyone is in pursuit of who they are, who their parents were, how they got to be where they are. And as they don costumes and names as easily as they change identities, social classes and pick up with the next lover, finding a stable identity is never achieved. As the priest becomes a soldier, he then goes back within his story as a soldier, to tell an anecdote that reveals he was also a gentleman after he was a soldier. While he is a soldier we also learn how he comes by a gypsy outfit that he dons in a plot to save the boy Pedro's life from a killer who then becomes a count, that is, after he is a pirate. And then the same priest goes to another monestary where he meets his father who, in turn, goes back in time to tell his own story which is, of course, the story of the priest himself. So not only do the characters transform themselves across this wandering narrative, as they tell their story, they also mutate into either a protagonist in the listener's story, or they assume the story of the listener him or herself.

As I say, the lyrical unfolding of stories within stories, in which identities shift in and out of different times and places, across continents is all nourished by the sumptuous camera work familiar to Ruiz's films. As well as the magical 360 degree pans, we see shadows and reflections on surfaces that do not exist, impossible views from under the floor as if through a glass ceiling. And when he is not tricking us, the image is exquisite. In one such moment, filled with irony and beauty, two lovers discover they have been found out by the woman’s husband, they presume. How did he find out, the man, who ends up being the priest's father, asks genuinely perplexed. And as he asks, the shot is framed, masked vertically, we are led to believe by curtains behind which a servant watches the lovers' triste. The curtains gently pulled back, not only reveal the scene, but they place us in the privileged position of voyeur, from behind the curtains. And in the distance, on the other side of the room, through glass doors that open out onto a garden, we see a solitary servant standing, watching, everything. And so the layering of foreground, middle ground and background, through windows, doors and curtains, creates a game of deceit and discovery that so counters the lovers' conversation that their naïvety becomes stupidity. All this, in a single frame. 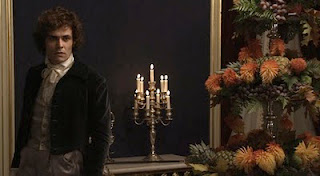 There are, as might be expected, an infinity of themes, subplots, morals and meanings. For example, money changes hands constantly, however, having money is not so important. On the one hand, what is important is not to accept money that does not belong to you. Pedro's mother is offered a fortune by her unfaithful husband, a count. She chooses not to accept the money, and thereby impoverishes her son and hence hinders his entry into the monastery school. She dies a solitary death of the plague in a convent, and sees her son only once, through the grate of the convent. And yet, he was the reason for which she lived in the first place. She claims to retain her honour by not accepting the money because her husband had kept her locked up and  had betrayed her for an affair that produced the illegitimate son in the first place. This, despite the fact she had already had the child before they were married! On the other hand, this does not mean that to have money is a bad thing. Indeed, those who are redeemed are those with the money: the assassin who the priest – then a gypsy – pays off to ensure he does not kill the boy – is redeemed in his life of luxury and social elevation. As is the count, who, on his deathbed offers his fortune to Pedro's mother, his wife. Money, like everyone and everything else in Mysteries of Lisbon, is also fluid and unpredictable in the values it carries within it, and the meanings given it by the film.