Every one of Joel Peter Witkin’s images in Heaven or Hell is violent. These photographs are violent, disturbing, and I can see why they have a history of controversy in the United States. That said, however, they are also very clearly  critiquing, or at the very least, drawing attention to violent images of a different kind: all those media images that massacre and maim the body in the interests of political oppression and financial gain. Similarly, the way they are exhibited at the Bibliothèque Nationale together with other drawings from their collection, I wonder if the photographs were a commentary on the history of art that Witkin clearly draws on? While Rembrandt's women's bodies are voluptuous and rich, Witkins will be obese or painfully thin to the point where they are skeletal. What does this say about the representation of the body in Western art?


As a man hits a nail through his nostril or a figure sits with his or her wings broken off, we are reminded of the history of art that is referenced by the images, but simultaneously, as we look at these and other images of violated and distorted bodies, it’s impossible not to recall the wars, both real and represented that care little for the integrity of the human body.  And surely, though Witkin’s images may be more explicit, they are no more violent than the barrage of mass media images that verge on pornography as they penetrate our homes and our lives on a daily basis. Indeed, this reminder makes the photographs even more disturbing and confronting than they are already. Because for all their confrontation, the real crime is being committed elsewhere: if Witkin’s photographs are about death, destruction, war and the loss of humanity, the performative and ironic twist to these circus creatures ensures their morality is left intact, while the same might not be said of their mass media counterparts.

What I loved most about the freaks and geeks in Witkin’s photographs was that even when they were minus an arm, massacred, violated, scarred by torture, or had an instrument of torture attached to their genitals, they were proud, they were human, and they had a strange beauty. Always, they were made up for the camera, and happily parading on a stage. This gives them a status somewhere between genetic hiccups, circus freaks and fantastical creatures of the perverted unconscious. Because the photographs are stripped, scratched, bleached and chemically disfigured, the medium itself gives the images a resemblance to early daguerrotypes, and with that resemblance, all of the implications of staging and posing. Similarly, the photographs reminded me of Méliès films, mainly due to their element of the magical, but also of course, because of Méliès’ wont to disfigure, decapitate and disappear the body. Once again, the staged element is exaggerated by the reference to Méliès’ films. Like the early silent films, the magic in Witkin's photos is both created in the mise-en-scène and in the manipulation of the medium. Or, put another way, the “performance” is created for and before the camera. In addition, like Méliès’ films the violated and decapitated body is returned to the body of the photograph, here with the scratching and distressing of the image. 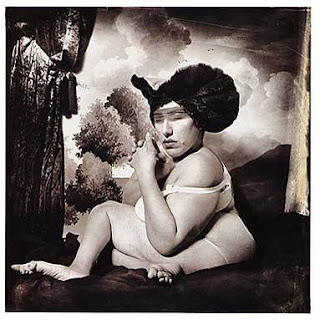 Also made overt in a very unique way is the  discourse on sexuality and gender. In all of the photographs gender is mutable or complex — women with penises, women without breasts, men with breasts and a whole pageant of figures who are neither and both men and women — but it’s rare to find any interactions between whole people in Witkin’s work. Nearly all of the figures are solitary, explorations of the isolation and desolation of the individual in this imagined world.
The title, Heaven or Hell points up another set of complex ambiguities that confused my response to the photographs. All of them hover between representations of unconscious fears and desires, and playful satires on the history of art. Are they tragic or ironic? Fiction or fact? It’s difficult to tell. And by extension, I found myself not being quite sure of whether or not to be repulsed or amused, horrified or in empathy with the distorted, degenerate bodies. And even then, I watched my response incase it was not what the photographs were wanting of me. So as they wandered between S & M, pornography, the history of art, Greek mythological figures and even contemporary politics, and as I moved through the exhibition, I became increasingly at home with the otherwise deeply disturbing and confrontational images.

copyright of all images, Joel Peter Witkin
Posted by Frances Guerin at 7:19 PM