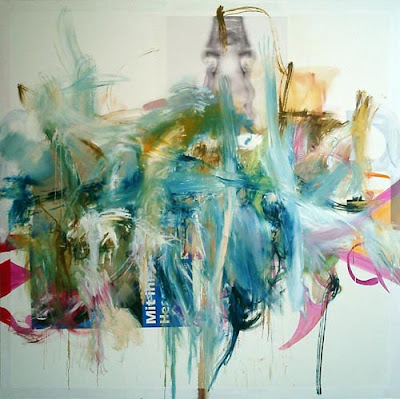 With the Centre Pompidou closed due to continuing industrial disputes, the Albert Oehlen exhibition at the Musée de l'art Moderne de Paris is one of the only contemporary art exhibitions on in Paris over the holidays. While I wouldn’t rush to see it, it’s certainly a pleasant way to spend an afternoon. But I am not sure it is much more than that.

I was excited at the prospect of seeing so much of Oehlen’s work in one place. However, his works which sit at a crossroads between American Abstract Expressionism, German neo-Expressionism with traces of pop art and even Secessionism are enticing, but not always rewarding. The psychadelic and plastic colors — lime green, violet, hot pinks — the collages of mass media images and the playfulness, or some might say, lack of subtlety, make Oehlen’s paintings unmistakeably post-modern. While the self-conscious use of media is interesting, it is also somewhat overwrought. Indeed, the application of paint can be almost ironic in its exaggeration: a sudden stopping and starting, the visible traces of the artist’s thinking – “I will place it here, not there”, and the drips running from left to right across the canvas. However, these gestures are not redolent of a love of paint, so much as a love of the self as an artist. 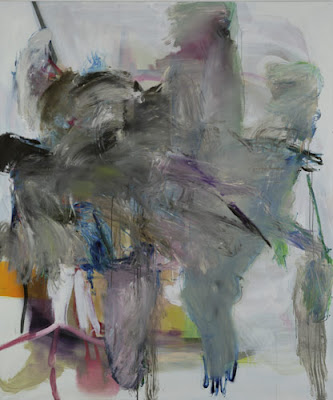 The same self-annexation is evident in the use of the different media – photographs, mass cultural images, different kinds of paint — did not convey much about the media or what they represent, but rather, betrayed an interest in what the artist can do, what the artist does. When the images invariably represent women's bodies, in fragmented form, the superficiality of the re-appropriation becomes uncomfortable viewing. And though the evidence of German cultural icons or German language could be identified in the interstices between different colors of paint or between images, these did not make any substantial reference to German identity, either cultural or historical. They were no more than compositional elements in a visual field.

On more than one occasion, I have been "accused" of being a modernist with all the derogatory and superciliousness of academic authority. However, rather than this being a strike against my intellectual position, it has never been made clear to me what the problem might be with aligning myself with a modernist aesthetic and a modernist sensibility. Certainly, if the demand for responsibility to image and what it represents be a modernist demand, I am not about to be convinced by the political, intellectual or ethical irresponsibility of my opinions! However, I am willing to be convinced that there is something I have not seen for the brashness of Oehlen's painting. 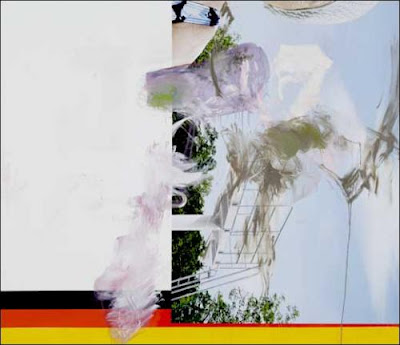 All this said, on another level, what I enjoyed about these paintings was the use of the thick white ground, and later in the 1990s and 2000s the colored grounds: these do not appear as supports for the collages of images and other painted shapes and gestures. But rather, background and foreground remain separated, two distinct planes, with nothing in between. As such, the emptiness of the painted space and its harsh perceptual effect when standing close to the canvas, become negotiated when seen from a distance. It is only then, at a distance, that the supposed emotional power of Oehlen's paintings begins to emerge.
Posted by Frances Guerin at 6:50 PM No comments: Links to this post 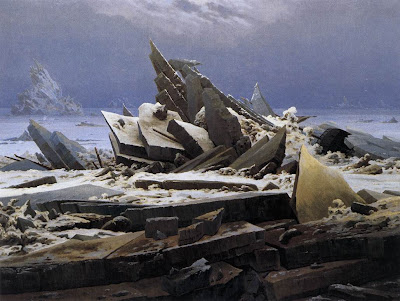 In among the odd and diverse collection of the Kunsthalle, Hamburg there is the most spectacular room full of paintings by Caspar David Friedrich. In a collection that has been described as second rate paintings by first rate artists, the room of Friedrich’s must be an exception. 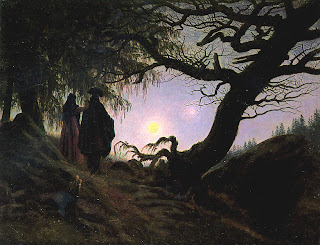 I have seen Friedrich’s paintings over the years and always loved them. Years ago, in Dresden at the Gemäldegalerie, I remember seeing Zwei Männer in Betrachtung des Mondes/ Two Men Contemplating the Moon (1819) and being so mesmerized, as if I was an 19th century viewer, obeying the call to fall, or be elevated into, the highest realms of spiritual experience through art. I felt for a moment that I had glimpsed the power of enlightened vision away from the routines of life, as if in imitation of the two men at the edge of the world. And together with the monk by the sea (Mönch am Meer [1808-09]) at Alte Nationalgalerie, Berlin, I was drawn into a meditative trance before this tiny painting. What drew me to the works in Dresden and Berlin was the size of the paintings, their dimensions seemed physically diminuitive, particularly in relation to the enormity of their vision. 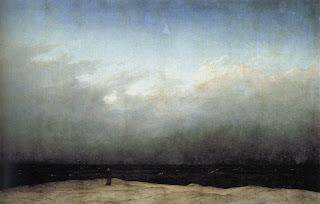 The painting that captured my attention in Hamburg was not, in this sense, typical of what I have come to know of Friedrich’s work. Das Eismeer (The Sea of Ice) depicts neither lonely wanderers, and nor is there a world before them that, through its opening up to the figures, invites us to identify and step into the possibility of infinite knowledge and understanding. And Das Eismeer is huge, by comparison, albeit with the same allover density of nature illumined. What stopped me in my step was the power and energy, the violence and sheer magnitude of the enormous ice pieces, rising up as if to meet the heavens, the ice was enraged, with a will of its own, there was nothing the fragile, man made world could do in the face of this retaliation. I don’t remember ever having seen nature so angry, at least not so vicious. It’s true that Turner’s storms have become the reference point for the turmoil and relentlessly unforgiving natural world. But it is a different kind of anger at sea on a Turner canvas than it is caught in the ice storm on one of Friedrich’s. The conviction and threat of the ice in this image seems permanent. The ice is sharp, it is imposing and there is no promise of its anger subsiding; even though there is a glimpse of light as the clouds open above, there is no promise that the sun will melt the wrath of the ice. We know that for Turner, the storm will pass, the daybreak will come, the stillness of the port will be the relief offered in the next painting. For Friedrich, the condition of being overwhelmed and overpowered by elements out of human control, indeed, beyond human imagination, is permanent. Unlike his other paintings, especially those of the solitary wanderer in a Romantic landscape, there is no apparent hope or way out of this cold, arctic prison. And with no end in sight, not even the hint of melting ice, the heart becomes heavy and laden with doom in the face of a nevertheless luminescent and glorious natural world. The ship looks as though it may have been there for months now, and certainly, it has no chance of leaving, weighed down, turned over, left to rot, trapped by the ice that now clings to it. Human failure is the only lasting consequence of our naïve attempts to navigate, colonize and arrest the power of the natural world.
Posted by Frances Guerin at 12:20 AM No comments: Links to this post 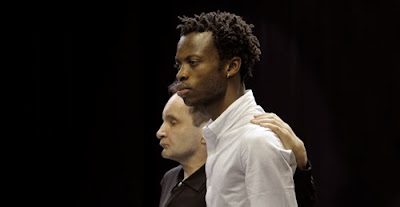 When Raimund Hoghe walked onto the stage at the Théâtre de Gennevilliers last night for the performance of Sans-Titre, I exclaimed without thinking to my friend James “oh look, he’s a hunchback” and immediately felt guilty for my indiscretion. And then, when Faustin Linyekula removed his shirt to expose his perfect black body, I was relieved that it wasn’t Raimund Hoghe’s body I was being asked to watch. Apparently as is usual with the lyrical and mesmerizing movements of Hoghe’s choreography, I was transfixed for the following 90 minutes. He laid out single sheets of A4 paper around the stage creating the frame for Linykula’s movements. And as Linykula writhed his perfect black body in agony at his enslavement to the deformed white captor, I was enchanted and amazed at how two bodies could so lyrically, yet, discordantly express the pain of being in each other’s worlds. They fought against each other, but not once did they touch. Until, Hoghe walked to the front of the stage with his awkward gait, and lay down on his stomach. Linykula began one by one, to place stones along the spine of his nemesis, crowning the arrangement with a stone on the point of the hunch. It was the most tender and loving expression of acceptance, a gesture that completely transformed my wariness for the man whose body didn’t accord with what I know as normal. And so, by the time Hoghe removed his shirt, the relationship between the two dancers and all of its implications of violence, aggression, and injustice prepared me to see through different eyes: the tenderness in the heart of the oppressed for his oppressor had fully replaced my fascination and repulsion for the hunch on Hoghe’s back.

There was a reference in the program to Pier Paolo Pasolini, about the necessity of throwing the body into the fight. It apparently inspired Hoghe to go on stage. He says, “other inspirations are the reality around me, the time in which I live, my memories of history, people, images, feelings and the power and beauty of music and the confrontation with one's own body which, in my case, does not correspond with conventional ideals of beauty. To see bodies on stage that do not comply with the norm is important - not only with regard to history but also with regard to present developments, which are leading humans to the status of design objects.”

I am in total amazement that he dares to show his body on stage, and yet, why shouldn’t he? As I writer, I recognize that my task is to creep ever closer to whatever it is that words cannot explain or describe. And if, as a writer, that takes the courage not only to access, but also to reveal my most intimate secrets, made up as they are of failures and flaws, then why should the dancer not reveal his? For a dancer, it is understandably healing and necessary to reveal the beauty and perfection of a body that is not usually seen as perfect. Hoghe says, “it is important to be able to work and to go your own way - with or without success. I simply do what I have to do.” Hoghe is clearly beyond attachment to what the likes of me with all my prejudices and social conformity think: he is motivated by an imperative that needs nothing more than its own fulfillment. To live and to express himself with the body he has been given.
Posted by Frances Guerin at 6:29 PM No comments: Links to this post