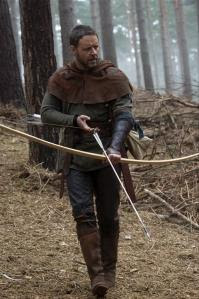 Russell Crowe, Ridley Scott, and Robin Hood, a combination that was not really calling me to see the latest installation of Robin Hood at the multiplex, but it was, to my surprise, actually good fun.

Contrary to the critics who have bemoaned the film’s digression from the age-old tale of Robin Hood and his merry men in Sherwood Forest, I am convinced Robin Hood’s appeal is in the fact that it tells a different story. Released here in Paris during that dreaded British election week, it was difficult not to see contemporary Britain written all over the monarchy as it was depicted in the film. The hunger for power at any costs, the fear of foreigners – once the French, now the Muslims – the hoarding of wealth by a small percentage who are still getting richer, and the desperate poverty of most in the land. While David Cameron might not be as dumb as Scott’s King John, he is equally zealous in going round the country and taking from the rich to pay his inherited debts, with care for his subjects, a claim without substance. 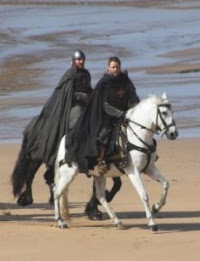 Those familiar with the Gallipoli Campaign in 1915 will also not fail to see the irony of Robin Hood’s fortified Australian leaders in battle with the French. Both Russell Crowe and Cate Blanchett as Robin Hood and Maid Marian almost single-handedly win the battle on the beaches of Dover while the clueless English fumble around in the background. I am exaggerating, but as someone raised on a version of history that sees the British drinking tea while the Australian and New Zealand soldiers were slaughtered in the campaign to defeat the Ottomans, the irony of valorous Australians at war on behalf of the British, and risking their lives while the Brits sit back and munch on their false teeth, was not lost on me! That said, there wasn’t another moment when I thought of Russell Crowe and Cate Blanchett in the same breath. I couldn’t help wondering what Cate Blanchett would see in Russell Crowe. This is not only because she is so ravishingly beautiful and he is not, but also, because as actors they are completely mismatched. 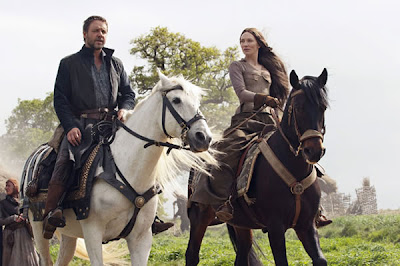 Another attraction of the film was that it reminded me of Shakespeare – how could it not? Even though there is probably a century between the legend and the writing of the English language’s greatest history plays, there are so many commonalities: all those hungry kings and morally upstanding lords and gentlemen landowners, farmers named after the towns they dominate, minstrels and mistaken identities. The film also has the narrative intrigue and twists of a Shakespearean history—another aspect of it that critics have objected to, and I enjoyed. But it is not Shakespeare. It’s not Shakespeare because it is not that profound or sophisticated in its language or its message, and of course, it’s the movies. And a good thing too, because Scott’s camera is sumptuous, as it surveys British countryside from the air and makes it look glorious, watches battle from the stirrups of the horseman as his animal bravely charges the enemy, and is enchanted by the music and dancing. Scott’s panoramic visions and precise visual effects are so delicious that their ability to capture us and keep us involved in the film might be the only thing Brits will want to own as theirs when the credits roll at the end of the film. 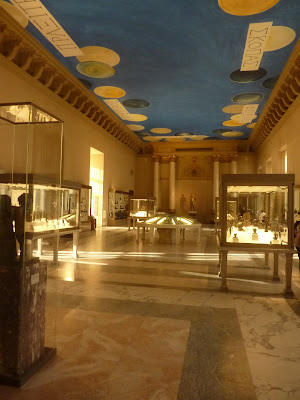 Twombly lovers will be disappointed by his long awaited, highly acclaimed addition to the permanent collection of the Louvre: The Ceiling. The Ceiling is just that: the ceiling of the Salle des Bronzes, built in the 1550s, which makes it the oldest part of the Louvre. Doesn’t it sound as though Twombly was given the opportunity to have his very own Sistine Chapel ceiling? But The Ceiling is a far cry from the labor-intensive, meticulous rendering of the doctrines of the Catholic Church on the ceiling of the Sistine Chapel. In fact, unlike Michelangelo, Twombly did not even paint The Ceiling himself. Before I launch into analysis of The Ceiling, I do want to applaud the Louvre's move to commission this work. 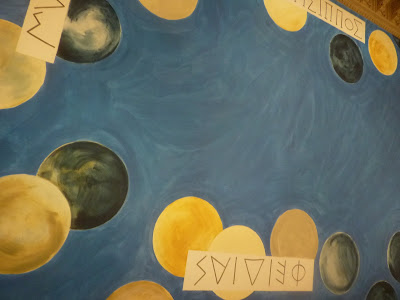 First, I am continually heartened by the Louvre’s efforts to keep its collection alive. And I have expressed my admiration for the institution’s willingness and openness to self-reflection through its invitation of contemporary artists, student performances and interactive tours into its hallowed halls. Twombly’s The Ceiling belongs to this unique and courageous pattern of innovation. He is the third living artist to be invited to contribute to the permanent collection, Anselm Kiefer and François Morellet being the first two. I think what I love most about The Ceiling has nothing directly to do with the Twombly design—it’s not a Twombly painting as it was executed and hung entirely by others, and it’s not even particularly Twombly-esque. Nevertheless, the painted ceiling draws people into the Salle des Bronzes, a section of the museum that I had never been. And perhaps in the spirit of Twombly’s other work, The Ceiling has an understatedness about it that finds visitors examining the delicate bronze treasures in the vitrines, rather than examining the ceiling. Certainly, my friends and I quickly drifted into reveries of where we might wear the exquisite bronze jewelry, and I wanted to smother the very sensuous Greek and Etruscan Antiquities, they were so beautiful. The ceiling is like a blanket over these priceless and inconceiveably beautiful objects. Like so much of what is on display at the Louvre, these extraordinary pieces are beyond description, their richness and fineness so foreign to anything in my reality that I feel as though I have fallen into another world, a magical world, when I am in the Salle des Bronzes. And because The Ceiling does not offer much to contemplate, it’s a credit to the Louvre as well as Twombly that visitors find what it is they are meant to be contemplating in the Salle des Bronzes. 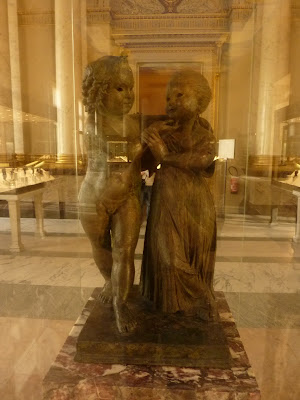 As I say, unlike Kiefer’s and Morellet’s contributions, Twombly’s is completely removed from the type of art that makes him one of the greatest living painters. Indeed, Twombly followers would not recognize this as a Twombly creation. In a very rare interview that the Louvre has included in an accompanying publication, Twombly himself acknowledges that The Ceiling is something other than his characteristically ephemeral and mystical canvases. There is nothing here to look at as everything is so circumscribed. One of the great joys of being with Twombly’s paintings is the sense of going on a journey, together, with him, and without him, just me and the painting that has been deliberately left unfinished, or better, open, waiting for me to complete it. There are no lines running off the side of canvases, there are no fading thoughts, no receding colors on this ceiling. The Ceiling is definite, consistent, forthright even. Not only is the work framed very definitively by the four walls that surround it, but the brushstrokes are finite, complete, representational, if somewhat abstract. We have no sense of the artist at work, the movements of his mind and his hand, across, around, stumbling upon something troubling on a canvas. In short, we are not given the opportunity to engage with The Ceiling as painting, to fall into it or be consumed by it. Rather, we strain our necks upwards, and after a while, return to marveling at the world on display down below. The Ceiling’s real vista being the bright, erotic eye that it invites us to cast over the treasures at ground level. 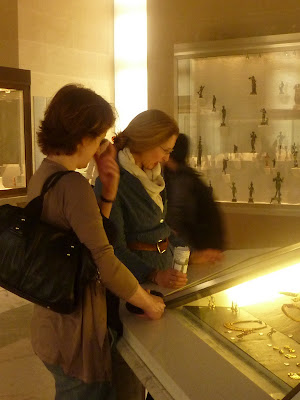 On the night we visited, as you can see in Anne’s photos, the sunlight striated the west facing salle. This was the real treat of the evening. The bronzes in their vitrines shone so brightly that they were all but singing while the sun set, as if just outside the window. And it was difficult not to be seduced by the elegance of statues such as this one below, his poise made proud by the warmth of the sun on his chest. As his shadow walks contemplatively away from him, we come to believe the magic and myths of ancient times have been transmitted down through the centuries to the Louvre, a place where the Gods still hold sway. 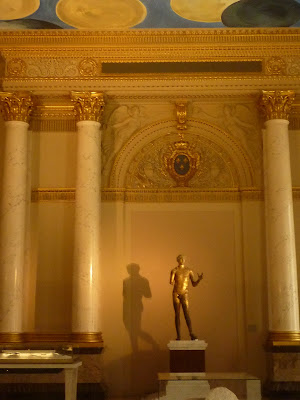