There will be no surprises in this exhibition for visitors familiar with Christian Boltanski's work. Boltanski is an artist who has been preoccupied with similar issues for fifty years, and he found a language in which to express those ideas very early in his career. Moreover, since the 1990s, the innovation has not always been in the works themselves, but in the way the installations are exhibited. In fact, the most interesting iterations of his work have often been the unique and interesting spaces of exhibition.
On entering Life in the Making on the top floor of the Centre Pompidou, I felt as though I was entering a mausoleum. The temporary exhibition walls are painted a dark grey, the lighting of Boltanski's black and white images is minimal, if it exists at all, and the mechanically sounding heart beat - no doubt the artist's own - drums through the entire space. To the point where the presence of the thumping heartbeat becomes subliminal, working on a deeper level of consciousness, underlying every step, and no doubt, leading to headaches for some visitors. As we move through the exhibition spaces, the black and white family photographs lining the walls plunge us into the familiar Boltanski world of memory, pathos and hopelessness. Given the sounds and images, I was puzzled by the exhibition's title, Life in the Making. Because nothing here resembles life in the present, in the making, or the pleasure of simply being alive. Rather, in familiar Boltanski fashion, everything points to death.
An enormous pile of black clothes, le Terril Grand-Hornu, 2015 resembles the charred remains of the unfortunate people to whom they might once have belonged. A single electrical light bulb hangs above the tip of the pile, barely illuminating the signifiers of death below. It's impossible to see any kind of life after death inside this dark, depressing world. Even when death is far from the work, it's memory haunts our thoughts and imaginations. Thus, for example, in his well known use of images of school children, in a work such as Après in which photographs show anonymous faces of girls smiling as they play in Hamburgerstrasse in Berlin, the blown up, indistinct, anonymous faces printed on very thin, torn veils are haunted by the fact that the girls must be dead. The children may not be  dead, but Boltanski reproduces their portraits in such a way that they remind us of ID photographs of Holocaust victims, or sufferers of other kinds of violence; they are votives encouraging us to mourn.

Or in the row upon row of columns made from rusted steel boxes, each with a small photograph on its front, we cannot help but imagine that each box contains the ashes of the person depicted or naming the box. Or perhaps their valuables have been placed in the box, as if in a vault, for safekeeping. Either way, there is no suggestion that anyone is coming back to collect their belongings. 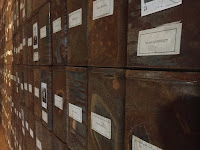 Boltanski grew up with a father who, as a Russian Jew, had escaped deportation by hiding underneath the floorboards for over a year. The profound effect this had on Boltanski's father is potentially taken up throughout the son's art across decades. The icons and symbols of the death camps are everywhere recognizeable, even if they are not present, in the works: piles of clothes, great numbers of blurred, anonymous faces with blackened-out eyes in photographs printed on flimsy cloths, black mirrors and veils, as well as sound installations that evoke practices of witnessing death and trauma. Of course, the exhibition and the museum are now closed in keeping with the government shutdown. However, should further reiterations of Life in the Making be staged elsewhere, Boltanski's work might just be seen as an omen for the end of the world that appears to be approaching through the silent city streets of our time.
Posted by Frances Guerin at 5:29 PM No comments: Links to this post

Daniel Arsham's eroded sculptures reproduce some of the world's great sculptural treasures, and is the perfect exhibition to see on return from a trip to Rome. The young American artist apparently gained access to the French molding atelier, the Réunion des Musées Nationaux - Grand Palais, that reproduces masterpieces for Europe's major encyclopeadic museums. Using the same molds and scans, Arsham casts perfect replicas of famous sculptures in hydrostone, a kind of uncoated terracotta clay. He then chisels erosions into the sculpture, exposing crystals of blue calcite, selenite, and quartz. The result is figures that are both disintegrating and, simultaneously, showing their mode of construction. They are both eroding and revealing their increased value, icons whose infinite reproduction and copying is in itself as much a cultural phenomenon as the object itself.

Having just returned from Rome, I couldn't help thinking of the gallery upon gallery of cultural riches at the Vatican museums. The endless rows of heads, animals, ancient gods and then the tapestries, paintings and sculptures acquired by each pope, adding to those already amassed from the previous one in the Vatican museums are the ultimate glut of accumulated objects. These collections that announce, "this is mine, I own it," is both the subject of Arsham's laughter and his critique of our readiness to consume everything in sight. On the one hand, the artist is showing the way that these relics are crumbling and disintegerating thanks to our unrelenting idolization, and on the other hand, with the sparkle of the precious crystalline stones discovered inside the objects, they are offered up to be further revered.
It is striking to notice that Arsham is doing the same thing with each of his reproduced statues.There is no differentiation between them, other than of course their form. But they are all the same material, they all go through the same process. To the point where, once we have seen one of these objects, we have seen them all. Nothing new is revealed by moving on to the next one. Except of course the fact that the repetition is itself a comment on the practices and processes of reproduction and adoration. The repetition might trivialize these great works of art, but it also gives them value. Furthermore, Arsham comments on our own behaviour in museums as both diminishing and elevating the value of objects on display. Rather than examining the work for its artistic qualities, we move to the next one, asking "who is it," ignoring its aesthetic qualities and historical significance in preference for  "spotting the great work of art."
Arsham titles the exhibition, Paris 3020, in a clear gesture towards the future of these relics. In 1000 years, the art lovers of Paris will be traipsing off to see the works, even as they disintegrate and lose all materiality. And yet, Arsham is also surely critiquing the present. These are the past works idealized in the present, made over and over and over again, not just by the RMN, but in the form of miniatures, key rings, light shades, and the list goes on. They are also reproduced in every material - metal and plastic being the most popular. We can never get enough of the iconic treasures of yesterday.
Arsham's work typically represents the decay of the objects and icons that we blow out of proportion through our adoration: footballs, computers and televisions, for example. All of these objects have a lifespan that makes them immanently disposable - at least that's what he draws attention to. But when those objects are centuries' old museum statues that are being reproduced for encyclopeadic museums, they take on a whole new dimension. Arsham's works become about collection, exhibition and reproduction, and in turn, how each of these practices diminish and exaggerate the value, destroy and recreate the importance of art.

Posted by Frances Guerin at 7:50 PM No comments: Links to this post

Email ThisBlogThis!Share to TwitterShare to FacebookShare to Pinterest
Labels: Sculpture

As a way to mitigate the inevitable overwhelm of history, culture, architecture, and art in Rome, I always visit one place, or do one thing that I haven't done before. After four days of looking at ancient, medieval and renaissance art last week, I headed for Gagosian's Rome gallery, just behind the Spanish Steps. This glorious space is not just a haven from the buzz of the streets, but stepping into a contemporary art exhibition brought relief from the layer upon layer of history that makes up the palimpsestic city. The clarity of the light flooded space, together with Kami's indigo and white paintings offer reprieve from the weight of history all around.

Contributing to the already obscure, floating shapes of the Night Painting series, Kami works with oil on linen, producing works on which the ill-defined shapes seem to float. I wondered for a long time what I was looking at. But Kami manages to obscure the abstract to the point where the white gradations and forms don't resemble anything in the everyday world. Almost resembling forms under the sea, perhaps under a microscope, in a gaseous state, or even x-ray images, the forms are always out of reach, never quite discernible.

Also on display are two paintings from The Great Swan series. These two larger works are striking for the black veil that comes down over the figures, obscuring parts of their bodies and heads. The paintings of Hindu mystics surrounded by rapt worshippers may have figures, but like the Night Paintings, it is impossible to say what is happening in the image. The eclipsing of the top half of each painting effectively cancels out the hints of figuration underneath. Though we may be tempted to ascribe a political or social significance to the scenes of The Great Swan paintings, whether their discourse is on greatness, or worship of idols, or the other worldliness of the prophet, in the end, the blurring of the faces and obscuring of the scene, renders all meaning, once again, out of reach. Thus, in the end, as much as Kami's paintings gesture towards the larger significance, they remain enigmatic.

Posted by Frances Guerin at 6:59 PM No comments: Links to this post