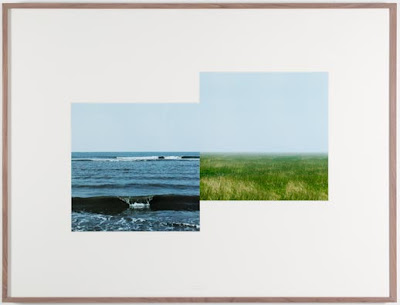 The great lover of modern painting that I am, means I was destined to be enthralled by the latest exhibition of Jan Dibbets’ work, Horizons, at the Musée d’Art moderne de la Ville de Paris. No other motif has been as important to the modernist search for an understanding of our relationship to the world, especially as it is discovered through the sense of sight, at the horizon. It’s difficult to think of a twentieth-century artist who hasn’t spent time exploring and representing the unfathomable moment of when sea meets land, when sea meets sky. It is the moment when we must cede control to nature, it is the moment when the limitations of our ability to see, to structure, and thus, to make sense of the natural world, is placed in the forefront of our limited self-understanding.

Dibbets’ photographic collages of the horizon are nothing if not unique. While they might be made in and discourse on photography, they take into account all of the mystery and meaning of the horizon as it has been represented in twentieth century painting. The exhibition notes claim that Dibbets is a descendent of Mondrian, as I guess most contemporary Dutch artists must be. But the Mondrian to which he is related is probably a long way from the paintings that come to mind for most of us when thinking of Mondrian. Photographs turned on their side so as to match the horizon between land and water in one photograph with that between sea and sky in another may remind us of Mondrian’s persistent questions of repetition and framing that repetition. Similarly, Dibbets’ experimentation with questions of perception through relationships between color and line, as well as the placement of the image, the geometrical organization, are certainly reminiscent of Mondrian.

But what I recall when I look at Dibbets’ gentle photographic collages is a conversation between nature and the man made that Mondrian engaged in at the very beginning of his career. In works such as Composition II, 1913 we see the young Dutch painter wrestling with questions of the infinite, his inability to master the perfect patterns of nature, and the continual search for new perspectives, new vantage points from which he might nevertheless try. In this sense, Mondrian’s work has everything to do with horizons and infinities we neither understand nor even grasp. That’s why Mondrian does the same thing over and over and over again; as a way of envisioning his belief in the importance of the search, the goal of which sits on a far off horizon.

Seen through the lens of Mondrian’s abstract compositions, Dibbets’ horizons are more ambitious. The precise measurements, the meticulously laid out, mathematically placed collage of photographs would indicate that order and control of the vast natural universe is indeed a possibility. While human perception may be tested through the diminishing sight lines (though not in the ways we would expect) the limits of nature are clearly articulated when they are caught by the photographic camera lens. If the horizon was once a secular icon for modern painters, the photographer who uses Polaroid snapshots has every opportunity to desacrilize it. In this vein, Dibbets reduces (or elevates) the horizon to a geometric pattern, an object used for the representation of something other than itself. 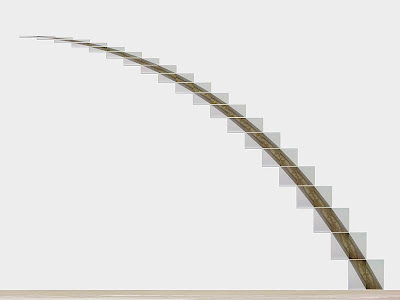 But Dibbets goes further than this. These sometimes exquisite works are not overwhelmed by the rationalization made possible through the photographic camera. Dibbets older works from 1970s especially are poetic, perhaps because they are produced with a Polaroid camera. With all of its implications of randomness and the ephemeral, the Polaroid snap shot also used by amateurs has an everydayness, a personal inflection that makes Dibbets’ images unique and aesthetic. There is also a certain nostalgia that comes thanks to the soft blue and green palette of the horizons he photographs with technology of the past. Although they shift, or rather, the way we see shifts, as we move between distance and proximity to the photographs, their visual appeal remains constant.

In the final room of the small exhibition visitors are treated to a series of Dibbets’ films, apparently intended for projection, but that nevertheless work well on monitors. Once again, tensions arise between the frame and the horizon as the cinematic camera moves vertically and diagonally against extreme horizontality of the horizon. Sometimes the camera moves in an arc, mimicking the meteorite trajectory of the collaged photographs, all the time altering our view of space, the limits of our perception and how the camera both creates and transforms the relations between the two. Apparently, these investigations of the horizon through a camera that has the privilege of vertical as well as at random angled movements, is designed to underline the precarious flatness of the Netherlands. While this was not my immediate understanding of the works, the possibility of this interpretation speaks to the fact that this is complex and layered work that has the potential for infinite meaning, just like the horizons it photographs.

Posted by Frances Guerin at 7:08 PM