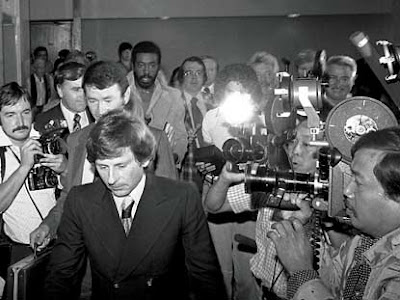 We all know Roman Polanski was charged with rape, unlawful sexual conduct with a minor and various other offenses, and we all know he fled the US a year later never to return. But what this film uncovers are the intricate details of the case in the California courts, and the manipulation of justice that plagued the case. In particular, the film focusses on the media conscious Judge Laurence Rittenband whose decision to convict was driven by pride and arrogance to save his face in the media.

The film is not particularly special or noteworthy as a documentary, ie. for its form, using interviews, archival footage and new footage, text and voiceover intermixed throughout. But it does present as a nuanced and sensitive account of Polanski's ordeal. Most impressive is the filmmaker's ability to not pass judgement on Polanski's actions, and simultaneously to indict a legal system that was clearly not working in the interests of justice. It's interesting that the film's most severe criticism is of those figures entrusted with the law who are led astray by an overwhelming preoccupation with their representation in the press. And this at a time (late 70s/early 80s) when cameras were not yet allowed in the court room. One wonders how different it would be if the case were tried today. The epilogue to the film tells us that the case was in fact retried in 1997 following the victim's public announcement of forgiveness. And the LA judge ruled that if Polanski were to return to the US he would serve no further sentence, but only on the condition that further legal proceedings would be televised. In effect, then, nothing has changed in the thirty years since. At least where the relationship between the law and the press are concerned, the two are as influence by and dependent on one another as ever.

What has changed surely though, is the cast of characters - from friends and associates, to lawyers and judges, not a single woman is involved in these proceedings. With all these middle- (now late-) aged white men writing and performing the law in a case of rape, sexual misconduct and potential abuse of minors, one wonders how different the ethical stakes and the outcomes of such an investigation would be if played out in a more representative courtroom today?

The film is worth it just for the archival footage, but also, it's an intelligent account of (yet again) the corruption of the US legal system.
Posted by Frances Guerin at 12:39 AM