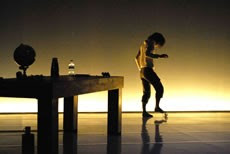 Tsuyoshi Shirai’s True is another of the Japanese dance works that open up whole new ways of thinking about dance and performance. First, I have to admit that there is a lot about the work I still do not understand. For example, the relevance of the title to the piece still eludes me. In an interview the director and lighting designer, Takayuki Fujimoto, says that the piece “tries to show that what we perceive to be a lie can also speak the truth.” Conceptually, there’s little to disagree with, but the connection to the dance performance is obscure. And that's through no fault of the piece itself! Perhaps this is because the knowledge base and aesthetic references of a performance such as True are, like so much that comes out of Japan, of a different realm, steeped in Japanese history, ways of thinking, and seeing the world.

True opens with what appears to be a street kid in a hooded sweatshirt and chinos familiarizing himself with his environment, mainly handling the objects that sit on a 10 meter long table. A cup, a glass, a globe, a puzzle, a toy aeroplane among other everyday treasures. Tsuyoshi Shirai, picks one up, inspects it, turns it around, looks at it from different angles, and then puts it back on the table. Ever so slowly the tension mounts and as Shirai handles an object, an electronic noise is emitted simultaneous with his taking it off the table. The second he puts it back where it was, the noise stops. Then the lights are activated. LED lights that beat at the rhythm of the technological sounds and bathe the space in their red, blue or yellow. This integration of sound, light and human body was extremely impressive.

In the West we are accustomed to thinking of dance as being about the body, and indeed, the body of the dancer is usually fetishized — through lighting and movement etc — such that the form and movement of the body is the very substance of modern dance. However, in True, the body shifts from a technological sound board to no more than a silhouette. Sensors are attached to Shirai’s body such that the movements of his muscles and his brain register on a computer and trigger sound and light simultaneously creating a world of technological wonder. Even when Shirai’s slight body is in motion, and indeed, his movements are often extraordinary, it is otherwise unremarkable. Dressed in street clothes we would walk straight past him were he to cross our path out in the world. And even though his movements are often of the highest technical demand, they are not flamboyant, but rather, most often they are an intensification of an everyday movement that you or I would make, unthinkingly. This understatement of the body is a very different language of dance than those we are used to, and might perhaps account for a reviewer for the New York Times complete misunderstanding of the piece. When Japanese art and performance is seen in the West, it might, on one level seem straightforward, but I would argue that it is rarely coming from an aesthetic and epistemic history that we have at our fingertips. This leaves me at least without the tools to understand, let alone analyse a work such as True. And yet, I was nothing short of riveted for the 90 minute performance at the Maison du Japon the other night. There was something so exciting about the sophistication and ease of this concert in light, sound and human bodies reduced to movement. 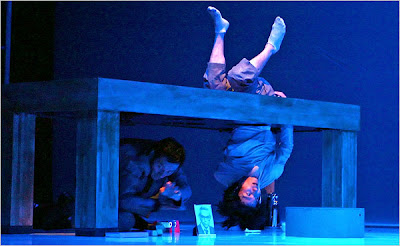 As Illustration of the “foreigness” of the references, my friend James pointed out with amusement a question posed to Fujimoto in the program. The French interviewer asks “In Renaissance painting for example, the table symbolizes knowledge. Does the table in your work have the same significance?” Without even reading Fujimoto’s response, common sense would tell us that in True the table belongs to a completely different order of things. The dancers pull it apart, use it as a jungle gym, they pass objects through it, and are drawn to it as a safe haven for objects that otherwise create intense noises when they are touched, or even worse, lifted off the table. The table is a constant source of fascination, something to return to, but also a mystery that can be transgressed, its parts used for innovative games (at one point a cylinder that is cut out of it is rolled across the stage). Whatever it is, the table obviously does not represent the sturdy resolve of knowledge.
Posted by Frances Guerin at 11:34 PM

Lovely post. Particularly since I'm mentioned : ) As I think more about that work, the more I think of that article from the New York Times (http://www.nytimes.com/2009/10/18/weekinreview/18schillinger.html?_r=1&ref=books )American literature without borders.

When a cultural work trangresses borders whose standards/ideals about art get privileged? How do we read an experimental (or non-experimental) work from a different cultural location? Does this transgressing of borders raise a question about our definitions about art or dance or painting? How do we access such work when we are not a part of the culture it comes out of?