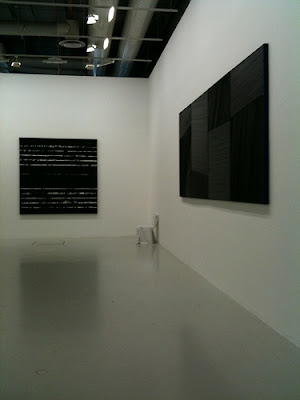 I have to admit I had not heard of Pierre Soulages before I saw the poster for his latest exhibition at the Pompidou Center. This, together with the fact I didn’t feel as though I spent enough time with the later paintings in the final rooms of the exhibition, makes my thoughts and impressions of his work seem incomplete.

My disclaimers aside, as I walked around the chronologically organized exhibition, watching the paintings get larger and larger, I was overwhelmed by how very un-French is the work of Pierre Soulages. French painting of the twentieth century is noticeably characterized by small, compact, quiet, petite. And certainly, Soulages’ Taschist contemporaries, Fautrier, Dubuffet, and so on, are not known for the largesse of their works. Even a painter such as Nicolas de Staël who made four foot canvases did so with a quiet, reflective resolve. There is nothing grand, aggressive or masculine in the form of de Staël’s work. Soulages is a different story: the later paintings might even be described as paint attacking the canvas: they are huge, aggressive, masculine and determined in their exploration of the relationship between black paint, canvas and the light it reflects. There is no quiet contemplation of the kind we see in the Ad Reinhardt and Frank Stella black canvases. On the contrary, if we compare Soulages to an American, it has to be the masculine energy of Franz Kline, an energy that is multiplied in Soulages’ severing of canvases with thick black lines.


The early works are fascinating as they engage with materials not usually associated with painting: tar and walnut stain on canvas, glass, paper. The specific quality of these substances, their dilution on paper and their luminescence on glass gives them a substance, a tactility that allows them to show the first signs of what will become Soulages’ trademark of color appearing to emerge from the surface on which it is painted. 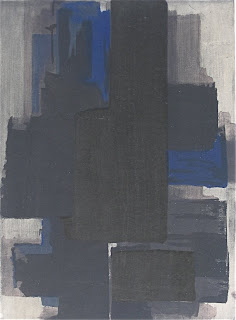 Among my favorite paintings were Peinture 202 x 125 cm, 15 décembre 1959 and Peinture 190 x 300 cm, 11 juillet 1965, both painted immediately before Soulages launched into his half century devotion to black. What I love about these paintings, especially the first, is that color is shown to be in a slow process of appearing, Up close it is as though the black has been stripped from the canvas and red is in a process of revelation. There is also an unpredictability to the black and the red, their relationship to each other filled with conflict that might drive them in surprising new directions at any moment. And this unpredictability gives way to a movement, an energy that is in no way harnessed by the rest of the painting as a support to the encounter between black and red, or by the canvas as frame to that painting. In turn, this energy is a force that beckons the viewer to connect with such a painting. In contrast, images such as Peinture 195 x 130cm, 30 Octobre 1957 feel trapped, stultified by the boxed in nature of the black strokes that overlay the color. Black has won the battle over blue, and there is no invitation offered to me to indulge in the vibrancy of he conversation with red, or with honey in Peinture 190 x 300 cm, 11 juillet 1965. 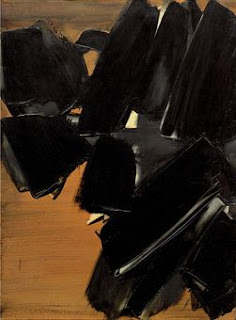 As I moved through the exhibition into the explorations of black, where black comes to dominate his palette and his thinking, I couldn’t help seeing them through the lens of Rothko, and Reinhardt. But it is only a useful comparison in so far as we get to see how completely different is Soulages’ relationship to painting and to the canvas. If, as I and others have argued, Rothko invites us to fall into his canvases of thickly layered paint, Soulages keeps us on the surface. The ribbons of flat against glossy black paint, the composition of different thicknesses, different viscosities, different panels of black moving in different directions across a diptych, even the veil of black paint dragged and scraped away to reveal blue in Peinture 222 x 137, 3 février 1990, keeps me occupied on the surface. In fact, these paintings actively discourage the contemplation that has me fall into my own self before a Rothko canvas, a falling I love and yearn to experience again and again.

All of this said, I need to go back and spend more time with the diptychs in which it appears as though the surface of thin black paint has been stripped away when wet with tape to reveal grey, brown, and white underneath. These huge canvases such as Peinture 222 x 222cm, 8 juin 2001 may represent a return to that vein of modernist love of painting in which the mystery of color is all that matters.
Posted by Frances Guerin at 11:43 PM

my best friend COLLECTS soulages! she has a ton of them! not my cuppa tea, tho...