Talk about driving in LA 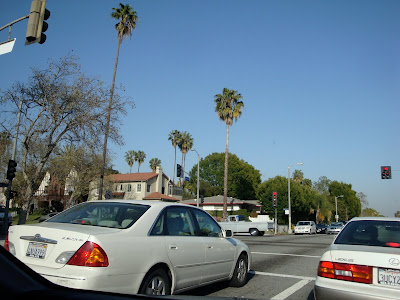 After spending five days in LA, the temptation is too great; I have to write about the traffic. Sitting at Bert’s, the closest Paris comes to American, I announced to American friends that I would be going to LA with no plans to rent a car. By the look on one face, I might as well have announced I had a terminal disease. Complete horror: “but you can’t get around LA without a car.” I said I had heard that the city had a very efficient public transport system. “But people like you don’t catch the bus,” the look of disbelief deepening on her face. I explained that didn’t really have a choice as I no longer have a driver’s licence. And I watched her grave expression shift between profound concern—not just for my enjoyment, but more for my safety in LA—and disbelief that I would attempt such a daring feat as navigating the city without a car.

This, something close to panic around my not having a car, prompted me to accept friends’ invitations to come pick me up at the hotel and whisk me off to the far reaches of “car only” accessible LA. There’s no doubt I had fun in the car with my friends, and it was really, an outing in itself. Where in Paris I catch up with people in cafes, in LA, conversation and laughter began the minute I stepped into the car. Most of all, I was struck by the Los Angelenos' relationship, not so much to their cars, but to traffic. In Los Angeles, the question is never “where am I?” or “where am I going?” but rather, “ what route do I take?” There's is a relationship to space totally defined by the peripatetic, dependent, in turn, on the time of the day. 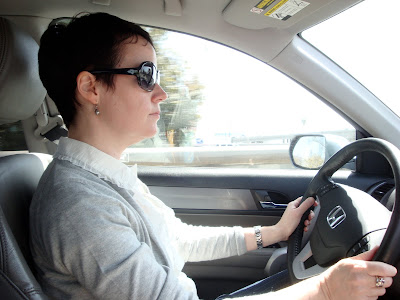 The constant discussion between strangers, friends, casual companions, with valets, concierges, in person, on the telephone, by text, the great social leveller in LA, is the intensity of the traffic on the road between here and there. Even though they all have navigators in the car, what Los Angelenos really needed to know is beyond the electronic mother’s best efforts to find her way around town. What they need to know is how many others like them are on that road. At times the conversation about traffic reached the intense (obsessive) levels of that between New Yorkers on the topic of their apartments. At others, I was reminded of listening to a scholar revealing never-before considered insights into some rare discovery. I watched and listened as my friend Denise discussed with a shop assistant how best to get from the Grove Shopping Center to downtown LA. The young woman was so focussed, knowledgeable, gave such intricate details of the route, the traffic, where to turn free of oncoming traffic, the sequencing of the lights, that it reminded me of a conversation I had the night before with Mike Zryd about 50s discourses on documentary. Like listening to Mike talk about his field of expertise, I was riveted, not only by the extent of the shop assistant’s knowledge, but by the verve and commitment with which she shared this knowledge.

On arrival, another internal dialogue begins: parking. Where to park, how much will it cost, will there be parking, how not to forget to have the parking ticket validated, how to remember which floor the car is on. And so the conception of space and became fraught for a whole different set of likewise unforeseeable circumstances. 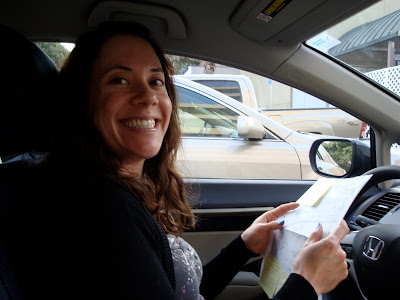 My sense is that the obsession with cars, traffic, parking, navigators, and so on is a chosen one, and that it is possible to move around LA without a car. And it did not take long before, I understood the look of horror on the faces of those who lunch at Bert’s on the glorious Avenue Marceau in the 8th arrondissment. Once on the bus, I realized that “people like you” means that “they” have never caught a bus in LA in their life. I also understand that staying downtown helps a lot as it might be the one place in LA where public transport connections are good. For me, the buses were extremely efficient, more so than in most other big cities, and the people who were “not like me” on the bus were all very pleasant.

I do understand that people work in areas where it is too expensive to live and so they need to commute to work, but I am not yet convinced that the car is so indispensible to the lifestyle of the Los Angeleno. At least, there are ways of organizing life so as to avoid the stress of how to get there, navigating traffic, parking, maintaining a car. But I wonder what then would be the conversation thread that might bind people together in this disparate, postmodern city?
Posted by Frances Guerin at 11:49 PM

Email ThisBlogThis!Share to TwitterShare to FacebookShare to Pinterest
Labels: America

I think what you say about traffic in LA is very true. We love to talk about it. You know, we don't discuss distance in terms of miles but in terms of minutes.

Such an interesting post, but so many unanswered questions, like: why were you at the Grove in the first place? (Perhaps you were hoping to repeat the Posh Spice sighting I had at the Grove when I was in L.A. a year ago, mopping up an L.A. traffic-related mess. Think Woody Allen in ANNIE HALL.)

And as is true of so much hooey produced in L.A., the myth of L.A. commuting hell turns out to be a little overblown. Look which cities are worse for commuters than L.A.: Montreal and Toronto.http://www.theglobeandmail.com/news/national/toronto/gta-has-worst-commutes-in-19-city-survey/article1516619/

Yet another thing Canadians are secretly better at than Americans.