New York - on the brink of nostalgia? 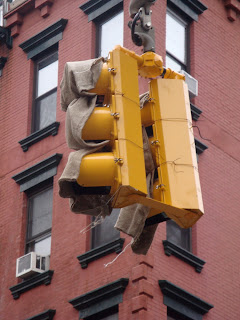 As I stood watching the N train chugging out of the station at 30th Av in Astoria, pulling with all its might, seemingly uncertain if it would make it to the other side of the Queensboro Bridge, I mused at how antiquated things in New York can be. When I lived in New York on the N & the R lines, they were better known as the “Never” and the “Rarely”. It’s not only the unpredictability of their timetable that makes the N & the R trains like relics of a bygone era. The stations themselves are filthy, the trains are so noisy that they put all conversation on pause when they arrive in the station, and they have given warm and dirty homes to the city’s rodent population. My favorite gesture that puts the MTA in the category of historical curiosity is when the conductor leans out of the window to check all are aboard. I can’t think of another subway system where there are no mirrors at the end of platforms. Even London's 19th century underground railway has updated to the twentieth century with approaching train information displayed on the platforms. When I think of the slick efficiency and relatively pleasant surroundings of the transit systems in Northern Europe, and of course, the twenty first century Asian cities, New York’s MTA seems quaint.
New York is an early modern city that today knocks at the door of nostalgia. If the subway is the microcosm of the city we live in, then New York is a city firmly entrenched in a bygone century. The walls and passageways are filthy, gigantic rats feast on the delights that fall between tracks, and when the din of the service trains screech through the stations late at night I am reminded of the death train, passing as if to collect all the corpses that would otherwise be left to rot on the tracks at the end of each day. Today, the ticket booths look as though they mark the entrance to ghost towns: empty with a handwritten note in the window, alerting passengers that bags are liable to searching. This is of course a hangover from 9/11 that, over ten years later, serves as no more than an empty threat. The one gesture of twentieth century modernization are the LED letters that denote the line at the head, and the corresponding destinations on the side of the “newer” model trains. It is an archaic, alienating subterranean world that forgot to replace the outmoded with high technology.
As the trains clank and chug below, above ground the streets are in a appalling state of disrepair. This is a common site at this end of the winter – dangerous with potholes and ruptures in the asphalt. Someone once told me the state of the streets was the accumulated result of a snowy winter. I now know they are the sign of tightening city budgets, thus forced neglect. This is a world that is growing old, and in places, falling apart.
Unlike the great 21st century cities, New York doesn’t always change so much. It’s true that there’s a whole lot of high rises especially in midtown and along the west side of the island. And it’s true that on most street corners there is now either a massive bank, a Duane Reade, or a Starbucks where New York used to be narrow-aisled, individual stores that knew nothing about chains or expansive spaces. And it’s true that my old neighborhood in Alphabet city (which used to be edgy and, in parts, dangerous) is now brimming with designer-clothed NYU students. But today, there are many corners of New York that are just as they were when I lived there almost twenty years ago. When I went for a run around the streets of Astoria, for example, I noted one new bus shelter on Vernon Boulevard, and the odd new building between Queensboro Bridge and Dittmars Boulevard. For the most part, Astoria is just as it always was: individually owned stores, the familiar New York brownstones and about sixteen different nationalities in any ten square meter radius. And Astoria is not the only neighborhood in New York that has not subscribed to the imperative to renovate, to stay up-to-date.
I imagine all the New Yorkers who will disagree with me and plead for the everchanging face of their city. And I already hear their rebuttals, their declarations of the twenty-first century, avant-gardeness of places, spaces and customs that I cannot have access to because I am no longer a New Yorker.  Of course, they will know better than me who can only see the city from the outside. To some extent, I agree, it is, like every great city, New York is colored by the contradictions that give it its identity. Nevertheless, I hold onto the vision of an old, other-century New York filled with whiffs of melancholy that I met as I walked through the lower east side, Chinatown, along the Bowery, and through the East Village last week.

Posted by Frances Guerin at 7:17 PM