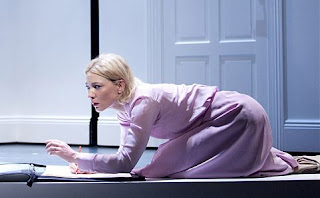 So much of the theatre I see these days has sets filled with video images, lighting effects, sets made to echo the great architectural inventions of the twenty-first century. The first thing I noticed about Big and Small was the sparsity of its stage: this is theatre pure and simple. There was a stage, actors and just enough props to create the space that would mark the borders of the stage for any given scene: a balcony, a telephone box, an elevator, an apartment building, a trash can, a doctor’s office. And like the objects that are the stage, this is a play in which 13 single scenes, or better, episodes, are held together by the powerful performance of Australian actor, Cate Blanchett. Other than her reappearance in each episode, there is little that coheres in this narrative. Big and Small is formally fragmented, and in the extremity of the existential crisis of a protagonist in a hostile world, the piece reaches towards the absurdism of Adamov or Ionesco, while all the time reminding me of the deep unfathomable world of human emotions in Tennessee Williams. 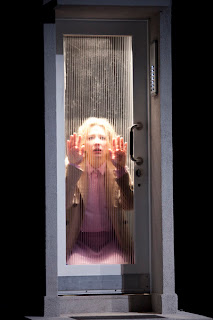 Big and Small is the story of Lotte Kotte, a lost soul in a lost world, a world in which there is no place for her. Lotte searches for her husband, Paul who has left her, who we meet when she returns the house in which they once lived together, in the house where he now lives with someone else. In each of the 13 episodes, Lotte finds herself in a space, in an encounter that takes her deeper into her own anguish, a step closer to madness. But no description of what happens in Big and Small can do justice to the extraordinary magic that results from Cate Blanchett, surrounded by the Sydney Theatre Company in a performance of what must be one of the great twentieth century German theatre pieces by Botho Strauss. The three together are mesmerizing. 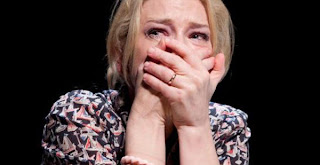 I don’t know how the French audience understood the play. I don’t question that they understood it, but how. At least, their interpretation must have been different from mine. In one particular scene, Lotte finds herself at an Australian barbecue. The focus is on a young man who inappropriately plays with himself while his parents and family oscillate between overt sexual crudity and repression, all of it made funny through the turns of Australian accents and humour. Lotte is funny, but the subtlety of her humour is untranslatable, often delivered through a fleeting facial expression, a turn of the head, an anguished clasp of her hands. When Lotte gets a job as a secretary, she takes the dictation of a man who we judge to underestimate her, to misunderstand her. She doesn’t type what he dictates, but rather, what goes through her mind: her yearning for Paul, the husband who dumped her. Once the letter is written she places it on a sleigh, even though there is no snow, and prepares to take it to the post office, wearing a motorbike helmet, even though she doesn’t ride a bike. Which is all to say, even though Big and Small is set in industrial West Germany during the Cold War, it is liberally adapted and performed by an Australian cast. 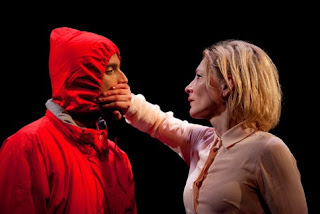 Cate Blanchett is so extraordinary as she traipses through her emotional nightmare, an odyssey through a hostile world, in search of her troubled self. Blanchett steps over the precipice, to become possessed, energized by the intensity, the madness, and the loveability of her character. The whole of Blanchett is immersed in Lotte, in her dystopic reality, moving with agility through a vast emotional range. It is a character easily identified with, as she comes face to face with madness, becomes lost in the insanity of her own mental wanderings, longs for solace and connection, and is at one and the same time, a visionary of profound proportions. Big and Small cannot exist without a great actress to play Lotte, and Blanchett’s performance is virtuosic. All of that said, perhaps what makes Blanchett shine even brighter is the force of the ensemble of actors that surround her, and the masterpiece which figures her. 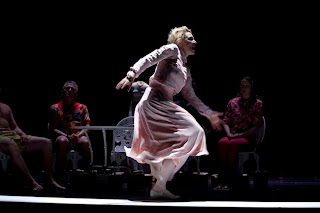 I think my favorite of the episodes of Big and Small is the final one in a doctor’s office, a scene where a handful of patients sit and wait their turn to be seen, where Lotte joins them in the waiting room. The scene is balanced on the edge of a razor thin edge, the atmosphere so dense in the silence that surrounds the patients as they wait. The only dialogue comes from the names being called, and Lotte’s random announcement of her husband’s profession as a journalist. As though it is all she has left to say. When Lotte’s name is not called, when she sits alone, the poignancy of her solitude is heartwrenching. She is left alone, yet again, in the waiting room, no one wanting to see her. The doctor comes out, and she admits she doesn’t have an appointment, to which he insists, “leave then.” She stands up and walks into the abyss of black, towards a vanishing point that doesn’t exist, at the back of the stage. In her quiet acquiescence to solitude, in the play’s unremarkable end, we are touched by the power of Lotte’s insufferable alienation from and isolation in a world that never finds a place for her.
Posted by Frances Guerin at 12:44 AM