Even though it is supposed to be my métier, I rarely have much to say about film these days. Least of all do I have much of an opinion on contemporary releases. But every now and then an old film will have a new print made and enjoy an extended run at one of the repertory cinemas in the 5th. Whatever we think of the film, its content, the apparently transgressive scenes of rape, Nicolas Roeg’s Bad Timing is a film that looks gorgeous. With its provocative – and kind of 1980s – use of montage, its lyrical, drifting narrative of closely cropped images, explicit sex and some extremely painful obsessions engaged in by the incognisant, Alex Lindon played by Art Garfunkel, the 35mm technovision image is glorious. I was left reciting the warn out refrain, bemoaning that they stopped making films that look like this.

Even beyond the way it looks, Bad Timing has some lovely gestures that make it completely a film of its time. For example, the use of the border between Czechoslavakia and Austria as Milena crosses for never fully explained reasons, is very much of its time. Shot in 1979, the film assumes all of the chill of the border crossing accompanied by the strains of Pachabel’s Canon that pervaded divided Europe during the Cold War. And then when the film cuts to an austere Vienna, Milena infuses verve and colour to an otherwise stiff, colourless world. The most daring Vienna can offer is the seduction of the Gustav Klimt paintings, surrounded by which we first see Milena and Lindon sharing their wisdom on sex and love as they move through the Secessionist museum.

It’s not a perfect film by any means. The Harvey Keitel character of the Austrian investigator of the “crime”, Milena’s mysterious death, is tentatively placed as a mirror to Garfunkel’s Lindon, but the mirroring isn’t developed. As Linden, the professor of psychoanalysis (an appropriate profession for a film set in Vienna) becomes more and more disturbed, in what is a textbook obsession for Milena, the vivacious woman he can never fully own and dominate, Keitel’s character walks around looking very handsome, but not doing an awful lot. How he reaches his genius insights that prove Lindon’s rape and ultimate guilt in causing the death, is assumed, never explained by the film. The only insight into Keitel’s character is so unexplained that it seems irrelevant to the narrative when he comes home one night and we see the photos of his wife on he dresser.

Similarly, why Milena has left her husband in Hungary is never made clear – his role seems to be simply to tantalize Alex and to ensure he has reason to distrust her, to confirm his reasons for obsession. 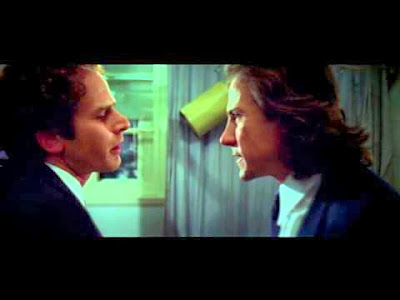 The narrative of Bad Timing does not collapse in the same way that Performance ‘s does, both at the level of the gender collapsing and the narrative’s imitation of that collapse. However, in Bad Timing the narrative has a very meandering, lazy forward motion. While we never know where it is going, its unhurried wanderings are forgive because the look of the film is so enticing, as is the conviction with which a masterful depiction of sexual obsession that is only just on the other side of the line that separates us from Alex Lindon. Bad Timing, with its radical storytelling techniques and its images of sexuality at its most violent and irrevocable still puts a chill in the air. Especially when the other films on offer here in Paris are the likes of Wolverine, Star Trek, and Spiderman.
Posted by Frances Guerin at 5:00 AM