Entering the grand palais for Ilya and Emilia Kabakov’s L’Étrange Cité, we are greeted by a dome meant to evoke the theory expounded by Russian musician Alexander Scriabin. Scriabin created a colour organ using the synesthetic system, based on correspondences between sounds and colours. The multi-coloured dome is also meant to evoke Wagner’s total work of art. The dome becomes the source of light for the dome of the grand palais; the two speak to each other. The Kabakov dome is magnificent, the changing kaleidoscopic colours actualize those that we see through the glass and steel roof of the nave.

After the entrance though, I have to say, I was disappointed. I was disappointed because the best of the previous installations of the Monumenta series in the Grand Palais have engaged the building in such exciting ways. L’Étrange Cité does not. After the dome, the city is a series of exhibitions in fabricated spaces. Granted, they are sometimes inventive exhibitions, but walking through the smaller rooms, I couldn’t help thinking, this doesn’t need to be in the Grand Palais, it could be anywhere. It was not until I moved towards the end of the Kabakov city, in the chapels, one dark and one white that I began to get an overall sense of where I was and where I was going, the installation as a whole. It was not until the end that I really began to understand how I was being asked to respond, what I was being asked to learn. Even then, I can’t be sure that I learnt the lessons

The individual spaces and cities within cities appeared to me as ways of seeing the world. Maquettes, drawings, paintings, designs, architectural blue prints, poetry, all come together in each space to articulate another perspective. Of those I understood, the museum is still on my mind.
The museum  was a museum without art. Nevertheless, I sat there with the other visitors, looking at, contemplating empty walls with spot lights shining on empty spaces where the paintings would have been. Other people did the same, or read the exhibition leaflet. Still others took the opportunity to rest, mostly in silence, listening to the music. I imagined, like me, it was the end of a long day for many people and here in the museum without art – at 10pm –  they were tired. The organ music played Bach, making the viewer, or audience, feel safe and secure in its repetition, its ecclesiastical tones, rhythms, temperature. The music, like the makeshift museum without art was German, Western, Grandiose. Even though it was clearly an imitation, I was reminded of how museums deceive me into thinking I am looking at something when often I am not. The museum is the frame for art that has no frame.

The ease of comprehension, or at least, my access to the museum, was helped by the fact that it could be understood within the interpretative framework of Western art. In other spaces, everything was written in Russian. Everything was abstract and conceptual and spiritual and intellectual. The spaces exhibited models and drawings that I was asked to look at, as if I was in a museum, but I was often unsure of what I was looking at. In these spaces, I recognized the practice of exhibition, but not what was exhibited. 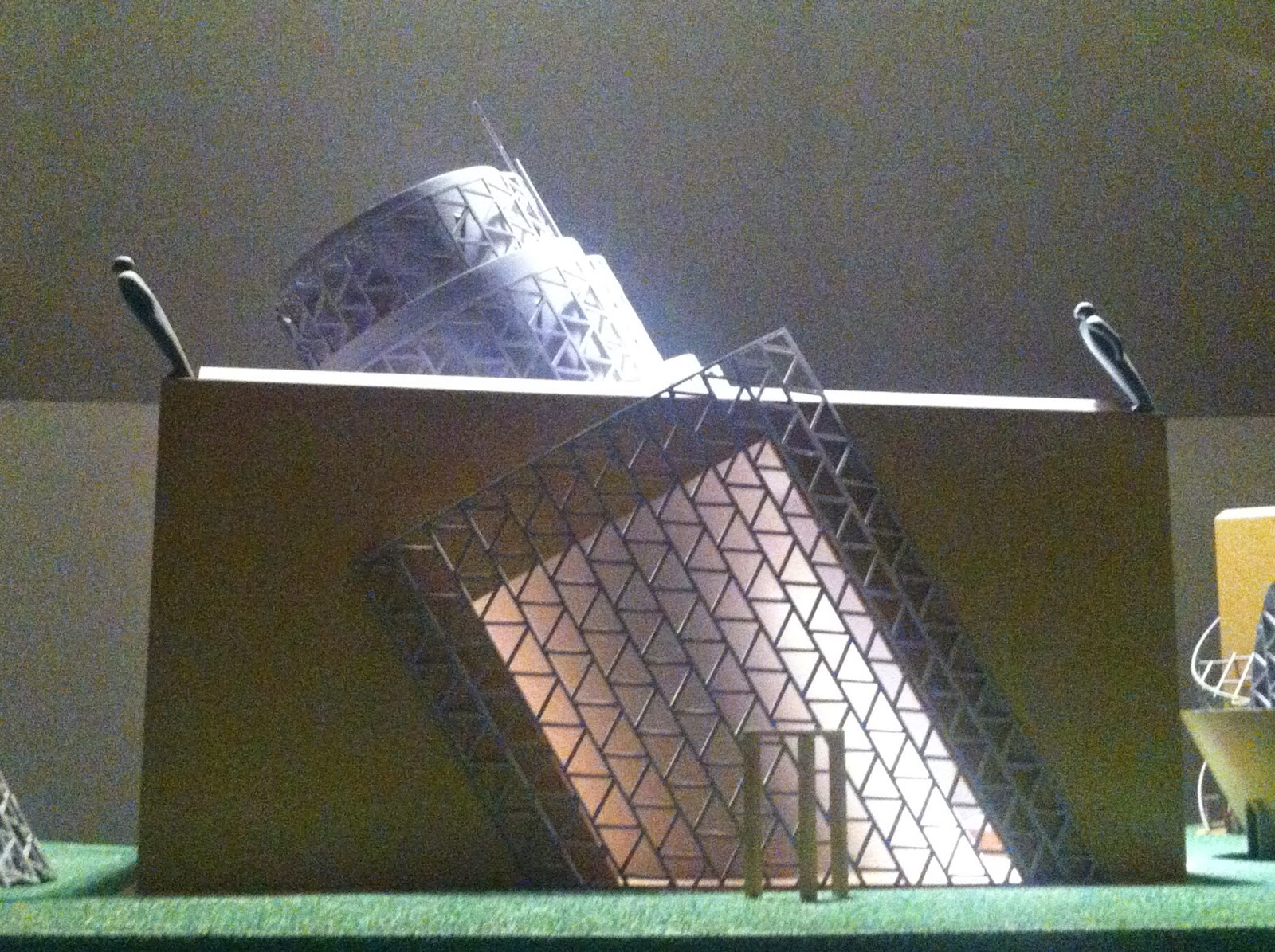 I did recognize the diagonal. The diagonal was everywhere, referring to what we know to be the creations of 20th century Russia and the Soviet Union. For Kabakov and us in the West, the diagonal is the shortcut for Leninism, the memory of a destroyed Utopia. Tatlin, Malevich, Rochenko, El Lissitsky and Lenin on his slanted podium that is more like a crane arm, reaching out into the world, but never arriving. This is a utopia that never arrived, and if it did, it is now long gone. It is an artificial world, of the imagination only. Like the Soviet Union, Kabakov give us a world filled with hopes and dreams that came too heavily disguised to be realized. One display claims that the slanted cylinders are also used for conserving cosmic energy, in the scientific sense. The diagonal is the influence and purveyor of all things in this strange city.

Towards the end of the path through L’Étrange Cité, the two chapels are curious. I liked these, again probably because I could read the paintings inside, because they are paintings, and they are in a style of Soviet Realism. The equation between church and painting, both products of a destroyed utopia, is easily digestible. The paintings are also frescoes, frescoes that have nevertheless been destroyed, erased, distressed.  Even though we move through the chapels as if through an exhibition, we don’t really study the paintings. The images are not precious in this spiritual or religious world of art history: images are documentary, they give information, deteriorate, are defaced, there to be disrespected, like the church in the Soviet Union. The Images are in the style of the history of art, but they are propaganda in the USSR and they cover walls and windows. When in this church, I realize that the Soviet Union is everywhere here, in L’Étrange Cité. The city looks backwards to the political nightmare of the USSR, and it simultaneously looks forwards to the dream of America. For Kabakov, the West was an illusory life for an artist, the dream of elsewhere.

The last room I entered, though it wasn’t the last room in the exhibition was that of the gates going nowhere. Interestingly, the paintings in this space were beautiful. They were the only objects of beauty after the dome. They were also the most easily grasped, because as an historian of Western art I could read their codes. And the gates were grey, which explains everything.