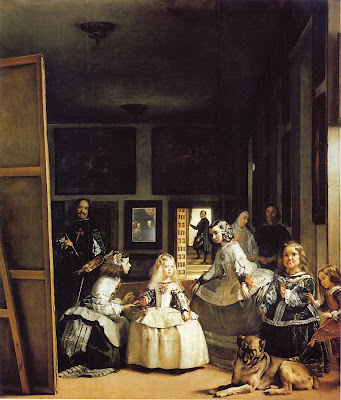 I have been learning about, hearing about, and reading about Velásquez’s Las Meninas for over twenty-five years now. I recall being transfixed by the painting as an undergraduate in a literary theory class when I first read Michel Foucault’s description of it in The Order of Things. Foucault’s argument about “truth” as a discursive construct was beyond me at the time, but his description of the instability of Las Meninas when seen from the perspective of its conflicting sightlines, its harboring of secret truths and its exposition of others, left an indelible impression. Together with the painting’s centrality in the history of Western art, its fascination finally drew me to Madrid to see it for myself.

Initially, it was with some disappointment that I stood up close to Velasquez’ masterpiece, because my first reaction was to recognize just how realist it is. Unlike many of the modernist paintings I spend hours looking at, at first glance, the Infanta and her Meninas, Velasquez, the King and Queen of Spain, the dwarfs and the dog appear as they do in reproduction. I felt let down to find it much the same “in the flesh” as in the coffee table books. But as I stood with it, looked at it from different distances, perspectives, through the filter of different discourses on painting, I slowly realized its immense complexity. And worse, its disquieting effect. 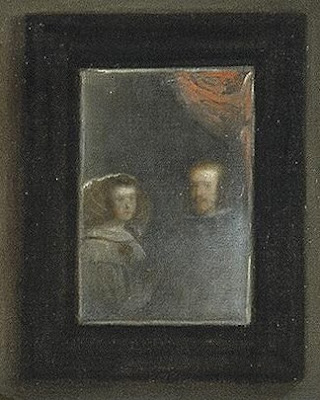 Any reproduction can tell of the excitement of Las Meninas’ reversal of the social hierarchical privilege with the King and Queen at the pinnacle of the vanishing point, yet blurred, mirrored, de-emphasized, indeed backgrounded. Similarly, we don’t need to stand before the painting to see the primadonna performance of the Infanta, her privilege, her place at center stage. Neither does our involvement perhaps as audience to her performance, perhaps as subject of the painting Velásquez executes within Las Meninas need to be experienced in person. And the relay of gazes around the surface of the painting is clearly represented on a postcard. However, up close and at a distance, in person, the scene comes alive in unanticipated ways.

First, Las Meninas loses its realist dimension as we move in relation to it. Both the space of the representation and our relationship to it changes as we move towards it, from a distance. Like a Candida Höfer photograph, the space of the courtroom flattens out and opens up, embraces us, folds us into it. But only as we move. It is a painting that asks us to move, and not only in space, but also in time. At a distance we see figures on a stage, a scene, the Infanta being prepped and primed, whether for us or for the painting. And then, in time, I see the painting represents a moment of interruption, a disturbance for which I might be the reason. Velasquez looks at me, confronts me with his look in my direction. No matter where I stand, he is looking at me, I am being watched, I can’t get away. I become unsettled, what have I done? How do I look? And now, I am being as difficult as the Infanta, resisting my being looked at, as much in need of appeasement as her. 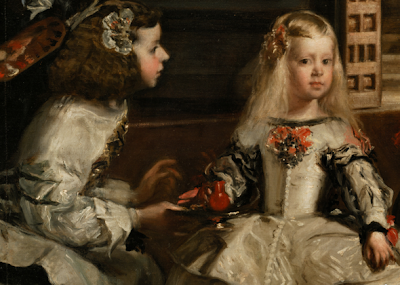 Up close, the bright light of the painting converges on the Infanta, on the space she occupies in the foreground. Where that light comes from might be ambiguous, but like the stage on which she might be acting, all that matters is that she is in focus and she is in the spotlight. Then as I move back, I focus less on her, more on myself — it is me who is now in the spotlight. Everyone is looking at me (including myself) perhaps because I am the subject of Velásquez’ painting? Or perhaps because I came to close to the one that frames it, Las Meninas? It’s impossible to know where I stand, who I am in relation to this painting, which is, of course, what makes it such an unsettling experience.

My friend James pointed out that my discomfort in front of the painting is the result of the painter and his easel in the foreground. If we were to take them out — as my undergraduate students would like change the endings of most films I show them — we would be left with a frontal, staged image of the royal characters and their attendants. The placement of the artist and his easel in the mise en scène open up to the work’s infinite complexity. Their presence creates the tension between who is being painted, as they now come to rival the Infanta (and me) for the role as protagonist of the painting. Their presence suggests, as other critics have done, the artist’s power in this highly structured society, a society which, in reality, he has no place. They create all sorts of questions about the status of representation — and as Foucault would have it — of truth. And for me, in Madrid this weekend, Velásquez’ presence with his easel unsettles my identity as a viewer – who am I? Am I the looked at? The one doing the looking? Am I welcome inside the painting? Am I represented? Or is this a representation of my imagination? Perhaps my place within the space of the painting, of the social world, of the museum is no more than a reputation. To create such ambiguity and disturbance is quite a feat for a painting that is nearly 400 years old. That’s what makes it a masterpiece.

Lastly, I have to say that one of the great joys of experiencing Las Meninas “in person” comes from the fact that it sits in the Prado Museum in Madrid, and not in the Louvre or another great museum. It might be a national icon in Spain, but there is no altar to Las Meninas: there is no glass in front of it, no barriers, no hovering guards, no hoards of tourists. On a sunny afternoon in mid-August, there was plenty of opportunity to take up my place among the royal cast of characters in the Museo del Prado. It is a painting that rewards time and energy, neither of which would be possible to give were it hung on more prominent walls.
Posted by Frances Guerin at 9:07 PM