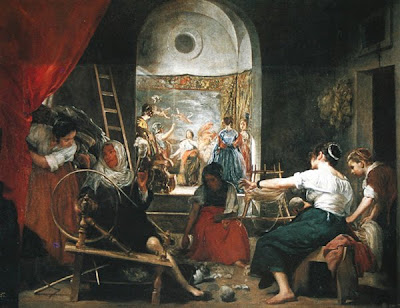 If Velásquez and his easel create a disruption to our experience of Las Meninas, then the unforeseen appearance of the girl in the foreground and the warrior in the background disturbs our experience of Las Hilandera (The Spinners), c. 1657. Everything about this painting speaks a moment of interruption that creates uncertainty in the spinning workshop at the front of the painting and completely unsettles the background in which a drama variously identified as based on Titian’s The Rape of Europe and Ovid’s fable Arachne is played out. The balls of wall, the red of the spinner’s face, the blurred face of the girl at the painting’s center, and the stark illumination of the girl in the foreground wearing a white shirt are all disconcerting. Why is the focal point of the perspectival recession of the painting blurred? Why does the protagonist of the main action have a red face? How can the cat cast a shadow when no one around it does? It is not only the activities and objects that fill The Spinners, but Velásquez’ mode of representation that raises more questions than it answers. 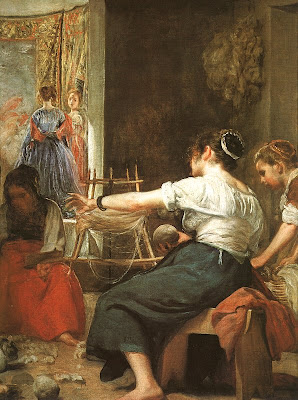 I had always thought that the girl who appears as if from the wings of a stage on the left of the painting was an angel. I assumed she was an angel in a red dress, come to tell the spinner of some secret future for which she must prepare. Perhaps the angel’s news is not good, thereby explaining the strained look on the older woman’s tired face. But now, I am not so sure. As I stood before the painting, I realized that what I have always taken to be her “wings” might in fact be a pile of fabric neatly folded on a table behind her. And I was startled to recognize that her supposed red skirt is some kind of barrier, perhaps a chair over which a length of red fabric is draped. Having just seen Las Meninas I was also keenly aware of the inconsistency and impossibility of Velásquez’s lighting: the girl with the white shirt is so illuminated that it appears the beam from the back window magically finds her at the end of its throw. And yet, she would have to be lit from where I stand and a little to my right for the spotlight to have her as its object. Again, I am perplexed: Why is she lit like this anyway? She is not the center of the action, so why is she in the spotlight, the climax of the painting? I follow the line of the lightbeam and I see that the girls at the back, one in a platinum grey dress, her attention caught by the dramatic entrance of the warrior, the other blending into the curtain and turned towards us, are also lit inconsistently. The light source clearly shines on them from above and to their right, and yet, they must be lit frontally for the light to fall on them as it does. How can this be? This is far removed from the stasis and consistency of the figures, their facial expressions, their jewels, the cloth that adorns them, and the perspectival logic in which they are placed in Velásquez’ royal portraits. 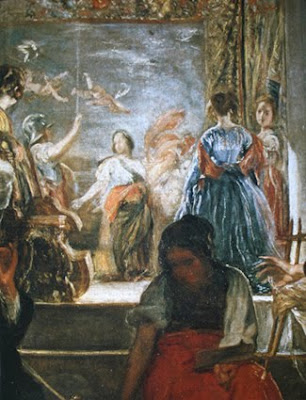 In the drama played out on the stage at the rear, I can’t be sure if the man is a character in the drama depicted on the tapestry, or perhaps he is actually on the stage. The light would suggest that there has been an “appearance” of some kind, but just like the ambiguity of its illumination, its source is abstracted. The beam is itself marked more as representation than as a realist source of illumination. With Guernica still on my mind, I wonder if Picasso was influenced by Velásquez when he painted light as just another object in the compositional plane?

And so I begin to appreciate the extraordinary vision of Velásquez in The Spinners. It is not simply his triumphing of daily life in the spinning workshop over the mystery of the fable in the background. This is only the start of the ambiguity brought to the fore in this painting. Whatever the cause of the interruption created by the visitors to the scene in both background and foreground, it is matched by the disturbance of and to Velásquez’ representation. This is a painting in motion and crisis as we see the artist’s collapse of the principles of composition, and the logic of narrative exposition as it was conventionally understood in the seventeenth century. He has not just taken our attention away from the regality of his portrait sitters, but he has upended their stasis and stability through disturbing the world of representation in paint.
Posted by Frances Guerin at 5:40 PM