Inspired and Provoked by The September Issue (R J Culter, 2009) 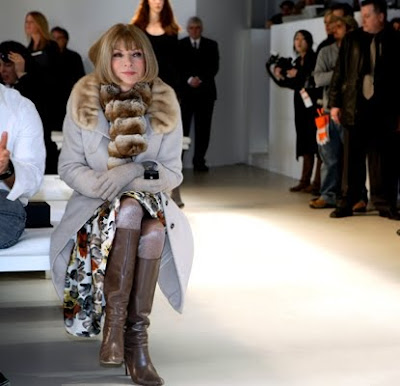 A few years ago, I skipped the afternoon session at a conference in the US to go shopping. You don’t have to be a fashion guru living in Europe to know that shopping needs to be done in the US because, unless you are after haute couture, clothes in Paris are overpriced and not very interesting. On my return, my friend Denise reported a colleague’s disbelief when he asked her where I was, and she replied, “she went to the mall.” “Frances wouldn’t go to the Mall” he replied, convinced Denise was hiding something from him, “come on, where is she?” In the opening moments of The September Issue Anna Wintour muses that fashion makes people nervous, as though it is some kind of overindulgent display of consumption gone awry. While Wintour’s world of fashion is very different from my findings in the Mall in suburban America, the same unease around creative self-expression imposes its judgment on our visual presentation whether it be bought from Banana Republic or Dolce and Gabana. Fashion is to be feared. And I would portend that fashion is feared because unabashed self-expression by women is feared. It’s why in Paris, anything a bit more creative is expensive and hard to find. Contrary to hearsay, it is a rare French woman who dares to look different from the crowd.

There are no doubt many reasons to be wary of the fashion industry, its unapologetic clothing of underweight pubescent girls in dead animals is just the beginning. However, The September Issue shows us that, in the eyes of Anna Wintour, editor of American Vogue, fashion is an art form, and its presentation a visual entertainment. The world of fashion is for dreaming and fantasizing, it is for creating our identities, it is a way to express who we are. As we rush through our day, on trains, walking on streets, past crowds listening to music, riding a bike, how we look is often the only chance we get at admitting who we are. What’s there to be nervous about? 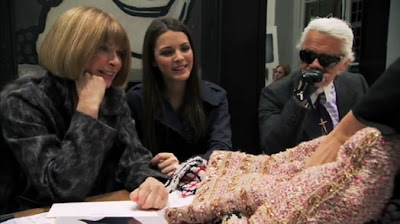 The September Issue is not so interesting as a film, mainly because it is not much more than a portrait of Wintour. However it provoked some interesting questions for me. It is a portrait — I couldn’t help thinking — that is a response to the more malicious version of Wintour in The Devil Wears Prada. Irrespective of her sympathetic image in The September Issue, why is there any discussion of Wintour as businesslike in the first place? Why the fascination with a successful, apparently not so warm woman, in a position of power? No film has yet been made about Donald Trump, either criticizing him for being “not warm,” or redeeming him through showing his human side, his tenderness. And neither is anyone rushing to make a film about Bill Gates’ lack of sentiment, or otherwise, on the job. So why is Wintour’s emotional life so fascinating? Because she is a woman. And so, The September Issue as a documentary response to The Devil Wears Prada reminds us of one thing: men and women in business are held to very different standards, still. 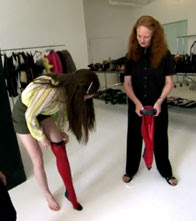 If Wintour were held to the same standards as men of her standing in their respective business, she would be seen as a role model. She is, by her own description, decisive, talented, professional, and the list goes on. As a woman in power, she strikes me as being highly competent, in an exciting way. I have had male bosses, one in particular, who was indecisive, wanting everybody to like him, selfish, disrespectful, insecure, all in the guise of “reasonable.” Given the choice to work for him and for her, I would take a job in Wintour’s office any day. Wintour clearly has vision, she is consistent, fair, respectful, and as the film presents her, she brings clarity to the office every morning, along with her Starbucks coffee! While being hard-skinned may be a criteria for being in her employ, for those who bother to watch and listen to Wintour, she shows loyalty, trust in her employees, and ultimately, inspiration as a woman in and with power. It’s more than I can say for any man I have ever worked for. 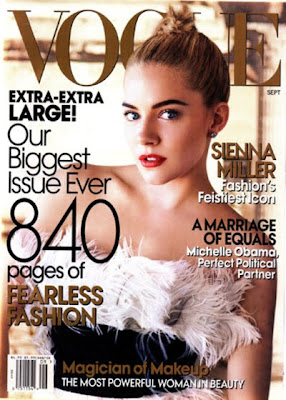 I have seen what Paris, New York and Milan Fashion Week do to those who work in the industry, and I know that The September Issue with its soft view of life at Vogue does nothing to capture the stress and neuroses experienced by those involved. However, I did come away convinced that we need more women at the top, inspiring us to find ways to express our power, a power that begins with what we have on as we walk out the door in the morning.
Posted by Frances Guerin at 4:57 PM

Fx, I think you're on to something about THE SEPTEMBER ISSUE, which I liked in the same way I like going to the mall: I know it's wrong, and I still enjoy it. And I would go back. Unlike most of what's available at the mall (and unlike the portrait of VOGUE you say you got from the film), however, the film seems to be the work of highly skilled craftspeople, with a vacuum at the top of the hierarchy. I didn't get any sense of Wintour's "vision" or even brain from the film, and the film actually seems more interested in proving that there's no there there. (That's how I understood the editing of the last minutes of the film, reducing Wintour to someone who does what she does to win the approval of her family, and whose main concern is how her "back end" looks.) In fact, I was much more interested in the Grace Coddington character or story, since she's not only more interesting to look at and listen to than Wintour, but is the only presence in the film who goes to any length to explain how fashion works (if only at an aesthetic level).

But the thing I think you're onto is that the film can only be interested in Wintour if it compares her to another woman, Coddington, and only if some competition between the two women can be established, as if it's such a scandal that a woman could be in a position of cultural and financial power that her power has to be destabilized by sisterly rivalry.

Also, I hated the use of music. It was like Cutler couldn't be bothered to think of any way to move from one idea to another, and simply basted the pieces together. What an awful film. But totally enjoyable in the way that American direct cinema is almost always enjoyable, and I'd definitely watch it again.

Jonathan, thank you so much for your comments, most I agree with. But I want to start by explaining, when I said the film showed Wintour's vision, I understood that she clearly had an eye for what would and would not work in the magazine. Too much black and white just won't work, that one photograph in the 1920s series was beautiful, but it belonged in a museum, not in a magazine. Her vision was one of knowing exactly what would and would not sell. As Coddington said, she knew all along before anyone else that the star as cover girl would sell. That's vision!

You aren't the first person to mention that Wintour wanted approval from her family, but I would need to see the film again to see that. If it was there, I missed it. I understood her family didn't really take an interest in her work, but not that she was so invested in their indifference.

Agreed on Coddington. I loved her. And I think what you say about the sister rivalry is an interesting take on the representation of power as necessarily one of competition.

Yes, the music was irritating, as was Cutler's presence in the film - in every respect.

Come to the movies with me again? Fx