From Beijing to Bergen

Two weeks and twenty five years after I left Australia, as the plane started on its holding pattern and I looked through the clouds, I saw land and water below me that filled me with a feeling of familiarity. I left Australia on a Norwegian cargo liner in October 1986 and on Tuesday, twenty five years later, I was on my way to Norway for the first time. I had understood it would be a beautiful country – but wasn’t really sure of what else was in store for me.
My lasting impression of Norway will the ease of being there. After two weeks in China — which to be sure was exciting and fascinating, but at times, difficult, frustrating —Norway was the very opposite. From beginning to end it was effortless, relaxing and even though I was there for a conference, it felt more like a vacation. Of course, the fact that the Norwegians all speak the most perfect English is a good beginning to any trip to Norway. And beyond the ease of communication, everything is so familiar, especially for me who lived with their food, their customs and among them, albeit only for six months twenty-five years ago. And even if I didn’t always follow exactly what they were saying, even their own language has a familiarity. That it shares many words with German of course helped. 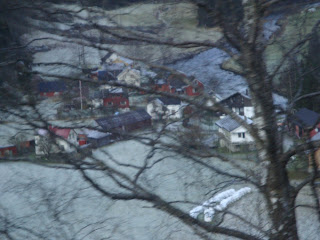 Beyond the familiarity, there was much that makes Bergen at odds with the world I live in. Most notably, the silence, and the orderliness, the efficiency of day to day life. As I wandered the pretty streets I was reminded again and again of the deep silence that permeates the picture perfect worlds inhabited by Ibsen’s characters, as opposed to the silence that arises from their inner torment. Over my five days in Bergen I didn’t hear one car honk its horn, no one yelled at anyone else in the streets, no one caught on fire when a driver cut them off on the roads – well, they don’t cut each other off in the firt place: the cars stop for pedestrians to cross the road, the pedestrians wait at the traffic lights, everyone patiently waits their turn in line, and they even let each other go before them at times. I didn’t see one police car, though when running one night I did notice an emergency entrance to a hospital so it seems as though accidents do happen and crises do occur. But I never saw anything that came remotely close. One night I saw a demonstration in the streets behind the cathedral. If someone hadn’t told me it was a demonstration I would have mistaken it for a religious celebration with about 50-75 people holding vigil candles and chanting. The public expression of rage and dissent bears absolutely no resemblance to the hoards that stop the traffic and make deafening noises as they crawl down Bvd du Temple.
With all this perfection, I felt as though entering Bergen was like walking onto a stage. I kept waiting for the curtain to be pulled back to reveal an anguish and turmoil I know to be underneath Norma Helmer’s perfect life in A Doll’s House. Other colleagues from different parts of the world who attended the conference remarked on the gloominess of Bergen. However, in spite of the darkness, the coldness, the silence, I have to say, there is a part of me that finds comfort in an emptiness that as far as I could tell, didn’t hide too much social injustice and personal agony. It was nothing but enchanting and so restful for me who is surrounded by noise and commotion in my daily life. 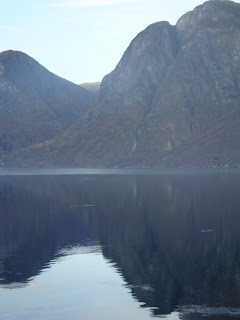 I got not sense of underlying psychosis in the people. They were all very pleasant, in fact, they were delightful, and following the ease of being in their city, they were just as easy to be with. All of this said, Bergen didn’t entice me, it wasn’t a world I was itching to move to. Because the quiet and the orderliness made for a city that has no edge. With nothing out of place, with the air as clean as I have ever inhaled it, with the water so clear it can be difficult to determine reflections from reality on the numerous lakes, I wouldn’t trust myself not to go crazy one day. There were the odd drug users and beggars in the park and streets up behind the cathedral, a sign that is in itself surely the alarm bell to tell me Bergen has other sides still to discover.
Nevertheless, I have to say, I came away from Bergen more rested than I have been in a long time. I can see why people would want to come here on vacation because it is so pleasant. I have some trepidation that its extreme equilibrium might turn someone like me into the Ibsen characters that don’t exist in the streets. But for a vacation? It has to be a great place to go.

Email ThisBlogThis!Share to TwitterShare to FacebookShare to Pinterest
Labels: Norway

It reminds me of the trip I took to Bergen when I was in grad school. Your blog makes me want to travel back, and soon!