A rainy day in Shanghai: it doesn’t seem fitting as my final day in China, but then again, it was the perfect headline to my stay in Shanghai: perhaps it was Shanghai’s final warning that this is not a city for me.As I wandered around, attempting to orient myself in this money making metropolis, I was reminded of a question I had in Beijing. Secluded within a Buddhist monastery around the corner from the Yunan Gardens, I was reminded of a wonderful afternoon I had spent in the Lama Temple in Beijing. Apart from being havens of peace in the middle of these bustling noisy cities, the temples fascinated me because of the reverence shown them as national treasures by a political system I thought was vehemently opposed to religion. And if the strange brand of Communism that rules China is open to Buddhism, how to explain the hostilities towards Tibetan monks and their protests in the form of self-immolation? How is it that Buddhism still has some voice in China, if not one that is raised in political forums? I can’t claim to understand the complexities of the Chinese government, but I do know that it is filled with contradictions. Everytime I asked one of my contacts or friends about the particular brand of Communism that seems to be flourishing in China, the answer was the same: “it’s complicated.” Not one person ever attempted to help me make sense of a dictatorship that allows private industry, free trade, and yet, enforces media censorship that is, nevertheless, able to be circuited.
While I can’t report with any accuracy on Chinese politics, what I do know from walking the streets is that China is a country filled with contradictions: between old and new, wealthy and poor, and surely that which permeates the pride of monuments such as the Lama Temple in Beijing and the monastery in Shanghai, between a religion open to all Gods and a government open to none.  And it’s the existence of these contradictions that, on the one hand, makes it possible for me to travel to China and be made to feel so welcomed, and on the other hand, ultimately keeps me on the outside …. 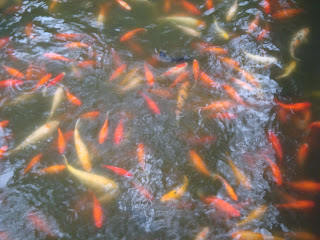 … I wrote the above paragraphs on the plane on my way home, and I have now forgotten all the contradictions. All I remember of China is the warmth of the people, how hard they work, their when a woman in a store of the Monoprix genre helped me buy stockings. When I had finished my grocery shopping I went downstairs to buy stockings as it had become obvious that even in the heat, Chinese women never go bare-legged. The shop assistant was so helpful: she obligingly answered my queries — in sign language — about thickness, size, colour, because of course, everything on the packet was written in Chinese characters. She showed me other pairs with different toes, of different deniers, undid packets, stretched them out, and went to great lengths to make sure I had the stockings I was looking for. As she walked me to the cashier, tapped the price into a calculator, showed me how much I owed, and bid me goodbye, I knew exactly why the Chinese hate the French. Where in Paris would the Chinese find such courteous, patient, and obliging assistance, all with understanding that not everyone speaks French?
Even though Shanghai was not filled with great memories, there were moments like this that were magical. It doesn’t make Shanghai exotic as the myth goes. But it does mean that even in the razzle and dazzle of a city fighting for dominance on world markets, in among the contradictions and disenchantment, I found the stuff of memories to serenade me back to China.
Posted by Frances Guerin at 8:25 PM

Email ThisBlogThis!Share to TwitterShare to FacebookShare to Pinterest
Labels: China