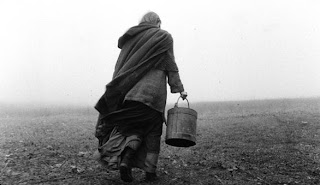 When I saw Béla Tarr speak at the Centre Pompidou a few weeks ago he was off next morning to the première of The Turin Horse (2010) in Italy. On my way home from seeing this film tonight, I couldn’t help wondering what happened in the Q & A after an Italian screening of The Turin Horse. My experience of Italians at such events, any event, is they love to talk. Béla Tarr’s latest film has no more than a dozen lines of dialogue in two and a half hours, and does not exactly open up the way for general chit chat. The Turin Horse lies somewhere between bleak and apocalyptic. 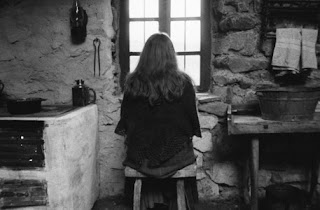 The plot, if only just a plot, is sparse: a man comes home with a horse, his daughter takes off his boots and clothes, she makes “dinner” — boiled potatoes— they eat them with their hands, stare out the window, sleep and have very little to say to one another. Next day, she dresses her father, they check on the horse, she gets water from the well, they drink a glass of water. And on it goes. Day after day for six days, there is nothing that resembles hope or a better tomorrow in Béla Tarr’s avowedly final film. The one consistent element of this dirge-like film is the sound of the storm that rages outside the father and daughter’s mud home. On day four (of six days) the angry father decides it’s time to pack up the cart and move away from the entrapment of their home. So we watch the young woman struggle to lift the trunks and their other belongings (including the potatoes of course) onto the cart. She then has to push the cart while the father with his dead arm and the horse that won’t eat are pulled along by her. We watch as the threesome disappear over the hill outside the house. Then just as the horse’s ears have disappeared forever, the three figures turn around and come home again. Needless to say, we never know why they left in the first place, nor why they change their minds. On day six even the storm passes and the sound is returned to silence. Simultaneously the oil lamps go out and the couple are in darkness. They try to relight the lamps, in vain. Thus the film ends, with the two not even eating their boiled potatoes, sitting at the table in darkness and silence.

But what happens is never the point of Tarr’s films. Rather, the camera watches sometimes from afar, sometimes in closeup, as the two go through their daily routines, getting dressed, drinking water, feeding the horse and cleaning out its stable. Life inside the home is a Walker Evans image come to life. There is nothing in this home: they have no books, no color, no plants, nothing that lives, nothing that could be held onto for emotional fortitude. Nothing. And yet, like an Evans photograph, the place is spotless, well-cared for, no doubt because there is little else to do out there in what seems to be the middle of nowhere. 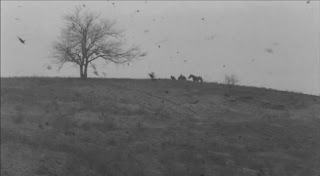 The film’s aesthetic is, unsurprisingly, gorgeous. And the moving camera we saw Tarr develop in his earliest films from the 1970s, and take to baroque extremes in Werkmeister Harmonies (2000), has become controlled, and measured in The Turin Horse. In the early films the wandering camera is restless, always in motion in a Pennebaker-like cinema vérité, but here in The Turin Horse the camera is constrained by the dolly on which it moves.
While I am not convinced an aesthetically gorgeous film can always successfully contain a scene and life as desperate as that of the country people in The Turin Horse, it seems to work. Or rather, it’s the gorgeousness of the film that keeps us there, immersed in the tedious, never-ending routines and rituals of a daily life. While the poverty striken life of water and potatoes with rags for clothes couldn’t be more removed from that of our own lives (the man next to me was drinking a can of coke), we are mesmerized and keep watching because of the beauty of Tarr’s images. Thus the film unrelenting keeps us, once again, in the middle of the descent into hell, a milder version of which we are familiar with from his earlier films. And perhaps this is exactly the point: The Turin Horse reflects the routine and entrapment of daily life as we know it, only with the color and accoutrements stripped away. 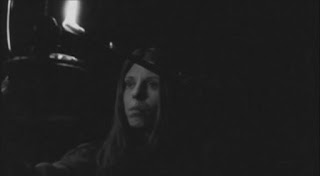 If this is not the point, it’s difficult to say what it might be. The father and daughter are given no history or context, and the relationship between them is not dwelt on in any way. All we know is that we would not want to be either of them. Against a black screen, the film opens with a voiceover telling the story of Friedrich Nietzsche who saw a horse being whipped in Turin and the event precipitated his breakdown. But when the image of The Turin Horse appears showing the man with the horse, there’s no suggestion they might be Nietzsche and his horse, or even, for that matter, that Tarr’s film characters might be related to the myth in any way. I don’t think it is possible to say that the film is about a particular historical moment, in Hungary for example. Because other than the language of the dozen lines of dialogue, the father and daughter could be anywhere. What I can say is, even if the motivation is not to show the hopelessness of the human condition, The Turin Horse's stretching of the cinema to narrational and narrative limits is justification enough to make it a must see for cinephiles like me.

Posted by Frances Guerin at 1:25 AM