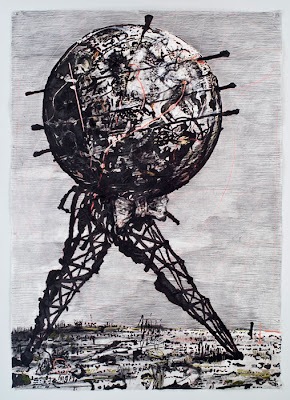 When I first saw William Kentridge’s work at the Documenta X in Kassel in 1997, I was mesmerized. I was fascinated by the seemingly endless layers, both literal and conceptual, of images that were always in the process of transformation, being drawn, changed, erased, added to. The process of inscription and erasure, and the animation of the inanimate through stop motion technique reminded me of the early animation of filmmakers such as Emil Kohl, who, like Kentridge was engaged in the meticulous creation of narratives out of charcoal lines. And as spectacles of magic and wonder, Kentridge’s worlds were as fantastic as those of perhaps the cinema’s greatest animator, Georges Méliès. In Kassel, I was also struck by the self-referentiality, not only thanks to Kentridge’s omnipresence throughout his films, but as Tom Gunning has discussed, in the visualization and thematization of looking, processes of perception, techniques of observing, the mechanics of the cinema and its predecessors. In all of these Kentridge seemed to be involved in an examination of the distortions of images and the worlds they create, and the eternal process of setting right those distortions. While today, the lines between media are so often blurred in contemporary time-based art, even rendered indistinguishable, in the late 1990s, such innovations were only just beginning. So the fact that Kentridge was a painter, a drawer, a photographer and filmmaker all within a single frame of moving images, made his work radical, while the complexity of its concerns was provocative.

As if that was not enough, the substance of Kentridge’s narratives was also powerful and urgent: discourses on South Africa, its history, and all its troubles were represented by Kentridge at a time when it was still too soon to know what the impact of the Truth and Reconciliation Commission hearings would be. All of these, as only the most obvious of the layers in films such as Felix in Exile (1994) and Ubu Tells the Truth (1996-97), made his work compelling and exciting back then. 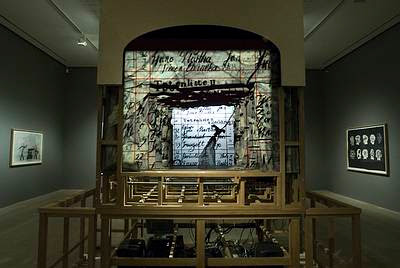 Over the years I have followed Kentridge's career, and though I have never seen one of his operas, one of the most interesting developments for me has been the extension of his creations into a whole spectrum of media. In the same way that he paints, draws, engraves, sculpts, photographs and films within a single frame, over the past ten years his films have spilled over into the worlds of opera, installations that might be sculptural, or perhaps they are miniature theaters (it’s difficult to say) or cinemas even. A number of works in a variety of media are on view at the recent exhibition of his work at the Jeu de Paume, Five Themes. Included here is Black Box/Chambre Noire (2005), which I have written about elsewhere, as well as his latest work Learning from the Absurd: The Nose (2010). 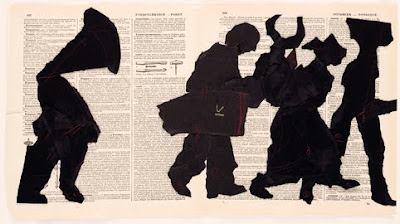 In Spring 2010, Kentridge staged Shostakovich’s opera, The Nose with Valery Gergiev at the Metropolitan Opera in New York. The moving images for the production have been transposed to a room in the Jeu de Paume, as a multiple screen, surround work that expands through shadow plays, poetry, shadow plays, archival film re-usage, images in process that come together as an the ode to Russian constructivism, all mixed in with Nikolai Bukharin’s 1937 testimony before the Central Committee of the Soviet Communist party, and a blaring of communist marches all repetitively looped into infinity. In characteristic Kentridge style images, music, hastily drawn charcoal lines, immediately erased and replaced, are cacophonic, assaulting, and yet, they evoke a gentle absurdity, that reminds us of the energy and ambiguity of the extraordinary events of the Revolution, particularly, as it has been theorized in its influence on creativity in post-Revolutionary Soviet Union.

Kentridge’s works are outstanding, if for no other reason than that they do something art and film today struggles to do: they work on so many different levels, appealing as well as being accessible to a everyone. Audiences who know about the German colonization of Namibia and the slaying of the Herero people in turn of the century West Africa will see a whole different level of meaning in Black Box/Chambre Noire. Similarly, visitors to Five Themes familiar with the pre-history of cinema and processes of animation or discourses on structures of looking and modes of perception, will be equally challenged and captivated by these video installations. However, what is so impressive about these creations is that even as they challenge intellectually, culturally, historically and politically, audiences who lack the political, cultural and artistic references will also sit mesmerized before the works, taking them in from beginning to end.

This is partly to do with the way the maquettes are arranged by the Jeu de Paume so that we are invited to sit before the films and installations, viewing them as a performance, and partly because of the way Kentridge constructs the pieces. Black Box/Chambre Noire for example represent parts of Mozart’s Magic Flute which is itself one of the most accessible operas, and the fragments that play on the soundtrack are the most popular and widely known. Added to this, Kentridge includes computer-operated puppet figures dancing across screens, as drawings and even as objects on a miniature theater stage, and these figures are a sheer delight to watch. This all, together with the element of magic and the animation of the inanimate gives all these works a lightness and a joy that is all too often missing from the esoteric works that comprise today’s experimental and avant-garde art. 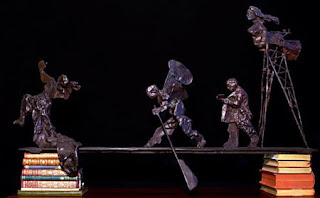 So all in all, I think these works are layered and challenging and complex, but what I am still left wondering is, once we have seen one installation by William Kentridge, do we need to keep going back for more? Does he incite new and exciting revelations with each new installation? I have not yet decided. But I will say, with Five Themes, for example I was delighted by two bronze sculpture scenes that I did not previously know: Bridge (2001) and Promenade II (2002). Like the films, Kentridge has turned bronzes into something ephemeral, in process, infused them with the unpredictability of a parade in motion, while all the time foregrounding their sumptuous tactility, the beauty of the material in which they are cast.
Posted by Frances Guerin at 4:14 PM